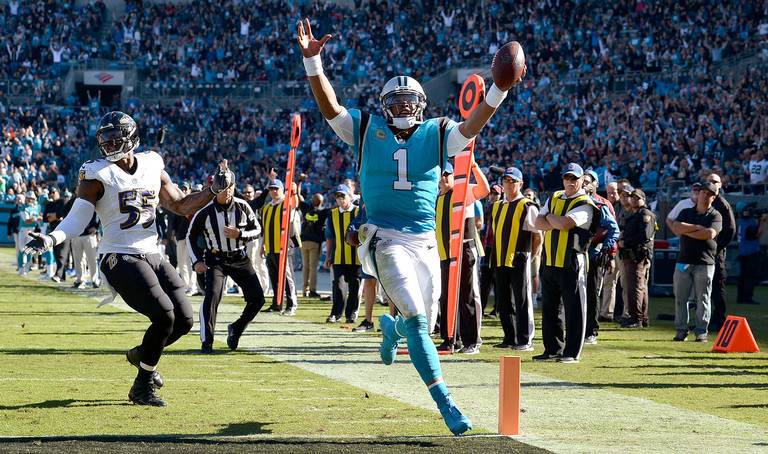 We’ve seen it before. We’re seeing it again. We’ll likely see it during the weeks ahead. The Baltimore Ravens are a model of inconsistency. And it’s been that way since Super Bowl 47 – even THAT championship winning effort was a microcosm of the team’s Jekyll and Hyde personality that has developed ever since. Including the playoffs (2 games) the Ravens are 45-45 since Super Bowl 47.

Three weeks ago, I opined that these are those same old Ravens. Last week I did an about-face because I thought that I saw something different in the team during their loss to New Orleans that made me think that the 2018 Ravens are, like Eric Weddle has repeatedly reminded us, different than the disappointing teams that caved late in games in recent years.

But in the end, against the Saints, it was yet another wasted fourth quarter lead from a defense that has become way too generous during any game’s most important moments.

Maybe teams have adjusted to defensive coordinator Wink Martindale’s scheme. Consider this, during the season’s first 27 quarters the Ravens yielded just 84 points. In the 5 quarters since the Ravens have given up 53 points. Since the 11 sacks in Nashville the Ravens have taken down opposing quarterbacks just once in two games.

Today the Ravens sit at (4-4), good for third-place in the AFC North behind the Steelers and Bengals. All three remaining divisional games are at home. Generally speaking, 10 wins is the benchmark for a postseason dance card, but now the Ravens need to find a way to win six of the remaining 8 games and that won’t be easy. Truth be told, it’s also unlikely.

“We’re 4-4 in a .500 league. We’re a game out of first place, and we have our season in front of us. We’d all love to have a better record than we do right now. We probably should have a better record, but the record is what it is. That’s our starting point. That’s what we fight from. The bottom line is the process and where we’re at and where we need to go as a football team. You study the tape. There are lots of things to get better at, but it’s not as bad as it felt after the game. So, you draw from that. The guys played super hard. They played very hard. We just didn’t play well all the time, and the Panthers made a lot of really good plays.” ~ John Harbaugh 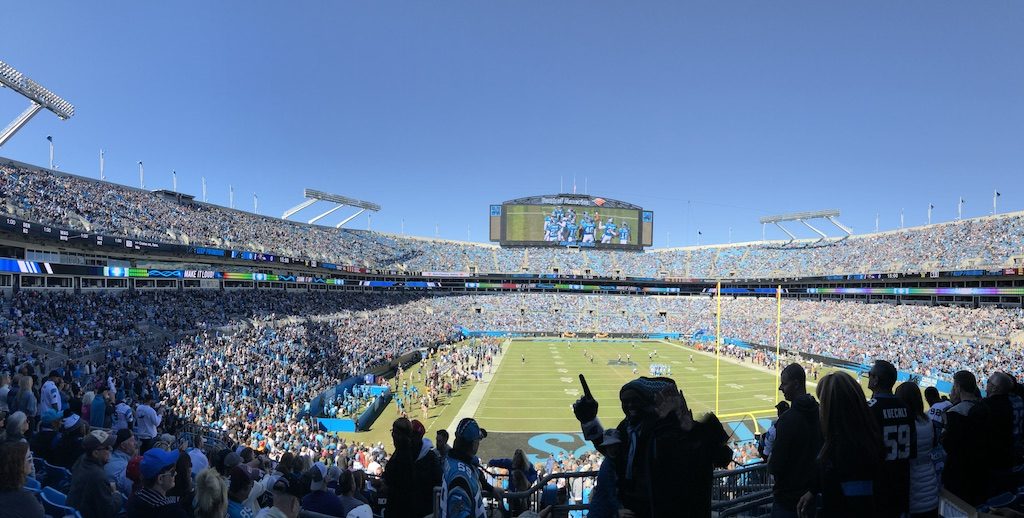 Observations from The Cheap Seats

Smith has been awful. His change of direction skills have eroded measurably and as such he gives up far too big of a cushion, even to receivers who don’t deserve such respect. Weddle regularly seems a step late – ditto for Jefferson, and Brandon Williams? My head explodes just thinking about the inappropriately placed cap dollars invested to keep him and his 13 solo tackles around. As for Suggs, the only thing I noticed from him on Sunday was his pinching down on misdirection and RPO plays that left his edge vulnerable.

Jefferson and Williams are unlikely to go anywhere in 2019 given the dead cap numbers as a result of restructured deals. But for those keeping “cap” score, parting ways with Smith would trigger a $9.5M cap savings and Weddle’s departure would save $6.5M.

It’s never a good sign when we’re looking ahead to 2019 just 8 games into the 2018 season. But the Ravens created this mess by doing the same things, the same way, expecting different results. Heading into the season the biggest challenges were in no particular order:

Flacco is pretty much the same guy he’s always been. His passer rating in a pass happy league is a pedestrian 84.9 (career average is 84.1) which currently ranks 25th among NFL starters. The Ravens defense is once again struggling to defend passes beyond the linebackers and in front of the safeties; Matt Skura (with little assistance from his left guard) is not much more than a warm body while the jury is still out on holding fourth quarter leads. The receivers appear to be better but untimely drops have affected all three top pass catchers.

C.J. Mosley wants to be paid like Luke Kuechly but he’s not even in the same neighborhood as the Panthers’ talented inside linebacker. Kuechly quickly diagnoses plays and gets to a spot to disrupt intermediate pass plays. Mosley always seems to be trailing and that number 57 is there for all to see. That said, not all of the Ravens soft white underbelly is attributable to Mosley’s coverage inefficiencies. The safeties bear some responsibility too.

Example of a play where Mosley probably gets charged with this completion but he’s in a tough spot. Funchess gets a free release off the LoS & runs full speed across the field. Mosley has to 1st eliminate run, turn, locate, then try to match a WR’s speed & beat a rocket ball. pic.twitter.com/h891DtQzOo

Matt Judon looked a lot like Matt Judon from 2017. And that’s a good thing. Maybe he could teach Mosley a thing or two about pass coverage. For a man of his size and a player whose primary focus is to get to the quarterback, Judon shows excellent technique when defending the pass.

Just when you think Joe Flacco has shed some bad habits, they rear their ugly heads again. Against the Panthers, Joe predetermined where he was going with the ball and on at least two occasions took the path of least resistance with a short throw when John Brown and Chris Moore broke open for potential touchdowns with time to set and throw. And for all who are quick to defend Joe because he doesn’t get time to throw, Football Outsiders, a highly regarded analytics site, has the Ravens O-line ranked as the fourth best at protecting the quarterback.

The Panthers seemed to bait Flacco pre-snap a few times, when changing their alignment across the defensive front seven. Flacco, with arms extended signaling a change in the call, practically told the Panthers a run play was coming. The Ravens are challenged enough in the run game. “Tipping pitches” doesn’t help matters.

Statistically the Ravens are still the No. 1 defense in the NFL. Now there’s a stat that fails the eyeball test. Talk about a paper lion…

Down 36-21 with a little over a minute to play and the Ravens decided to just kick off. No onsides attempt? This is the same team that faked a punt from their own 10-yard line in the first quarter leading 7-0 on the road against a good team. Maybe there’s some unwritten rule amongst coaches when the game appears out of hand that they opt not to risk injuries with an onsides attempt.

If the Ravens soil the bed against the Steelers and Bengals you would think that they might begin to look towards 2019 and let Lamar Jackson play. But the Ravens coaching staff won’t do it. They are coaching for their professional lives.

Pete Morelli’s officiating crew was horrible, particularly with the second OPI call against Willie Snead. But they aren’t alone. As a fan, don’t you get a bit sick and tired of penalties being called for things that don’t even influence the outcome of a play? I wish CBS had hired Morelli instead of taking a good ref off the field – Gene Steratore. Making matters worse for the thousands of Ravens fans in attendance, Morelli referred to Baltimore as Buffalo.

Snead’s 2nd OPI call. Sorry, I don’t have a better view of this. They didn’t show a replay on the live broadcast. pic.twitter.com/5ouk97ajJU

While at the game, I paid attention to the Panthers CB James Bradberry who heading into the game was one of the league’s worst cover corners. He played a lot of press coverage and was regularly beaten by John Brown and Michael Crabtree off the line. Why Marty Mornhinweg didn’t make Bradberry’s weaknesses a focal point of the offense on Sunday is mind blowing. The previous week Carson Wentz had his way with Bradberry. Shouldn’t all game plans be designed to exploit an opponent’s deficiencies? The Ravens were out-schemed in all phases of the game.

Want proof? Read between the lines of this tweet…

Hayden Hurst had a drop at the 2-yard line on Sunday. Whenever I watch Hurst, until he proves otherwise, coupled with Jefferson and Weddle struggling with tight ends, I can’t help but to think about Derwin James. They paid Jefferson, so they’ll play him, but I’d rather see Anthony Levine on the field. He has a nose for the football.

Tavon Young is one of the best slot corners in the league and his play against the Panthers supports the notion. He allowed only 1 completion for -2 yards. If Marlon Humphrey is still on the shelf v. the Steelers, some consideration has to be given to marking Antonio Brown with Young. We’ve seen what AB can do to Brandon Carr. Can you imagine how far Jimmy Smith will play off Brown? Hope he doesn’t back up into the harbor.

In their 4 losses this season the Ravens are -6 in turnovers.

PREDICTION: Alex Collins will be outgained by Gus Edwards, 42 to 28 yards
REALITY: Collins finished with 49 yards and a TD; Edwards 12 yards on 2 carries

PREDICTION: Za’Darius Smith will have 1 ½ sacks as an interior rusher; Ravens will register 4 total sacks against a weak Panthers’ offensive front.
REALITY: While Smith was the only defender to apply pressure (4 pressures, 2 QB hits), the Ravens put up a goose egg.

PREDICTION: Jimmy Smith will be targeted often by Newton but will come up with a big INT.
REALITY: Per Pro Football Focus, Jimmy Smith gave up five of six targets thrown into his coverage for 58 yards, and since his return has given up 12 of 15 receptions for 182 yards and one touchdown.

PREDICTION: Hayden Hurst hits pay dirt!
REALITY: He did but admittedly I thought it would come at a more meaningful time in the game. 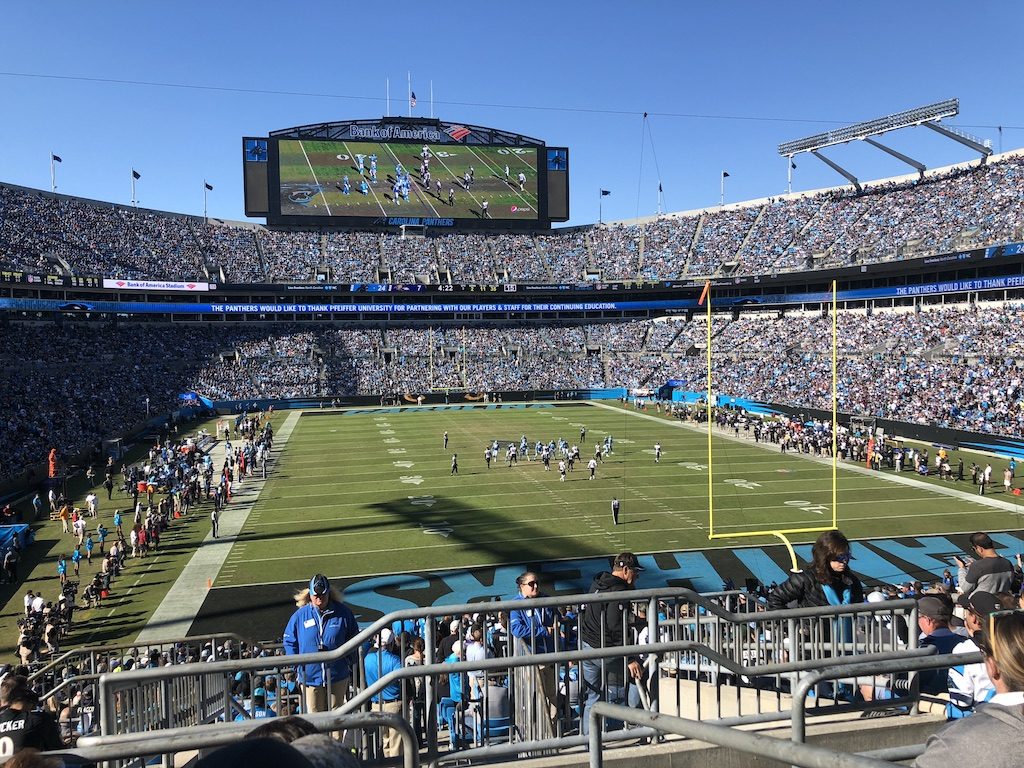 • Ravens are 3-point favorites over the visiting Steelers this Sunday.

• If you are like me and think that the Ravens gameday production is severely lacking, then don’t travel with the team. Other stadiums have far superior and energetic productions with a far greater knack to involve fans.

• Be that as it may, the (5-2) Panthers who have won 9 straight at home, had thousands of empty seats despite near perfect weather for football.

• Today at 4PM is the NFL trading deadline.