— Our beloved Ravens. A team that is normally able to bounce back from tough losses like the one against the Saints, but what a colossal letdown in Carolina. Nothing worked, and the future of Harbaugh and Flacco may be on the line in the next two home games against Pittsburgh and Cincinnati.

— The 49ers went up 15-3 early in the 4th quarter against the Cardinals with Arizona showing no life on offense. Then San Fran proceeded to give up 15 points and lose 18-15. Don’t ever trust bad teams.

— My least favorite matchup: Cleveland vs. Pittsburgh. Here’s the best piece of betting advice you’ll ever read on this piece. Whoever I pick in that matchup, go the other way…then invite me out on your yacht. 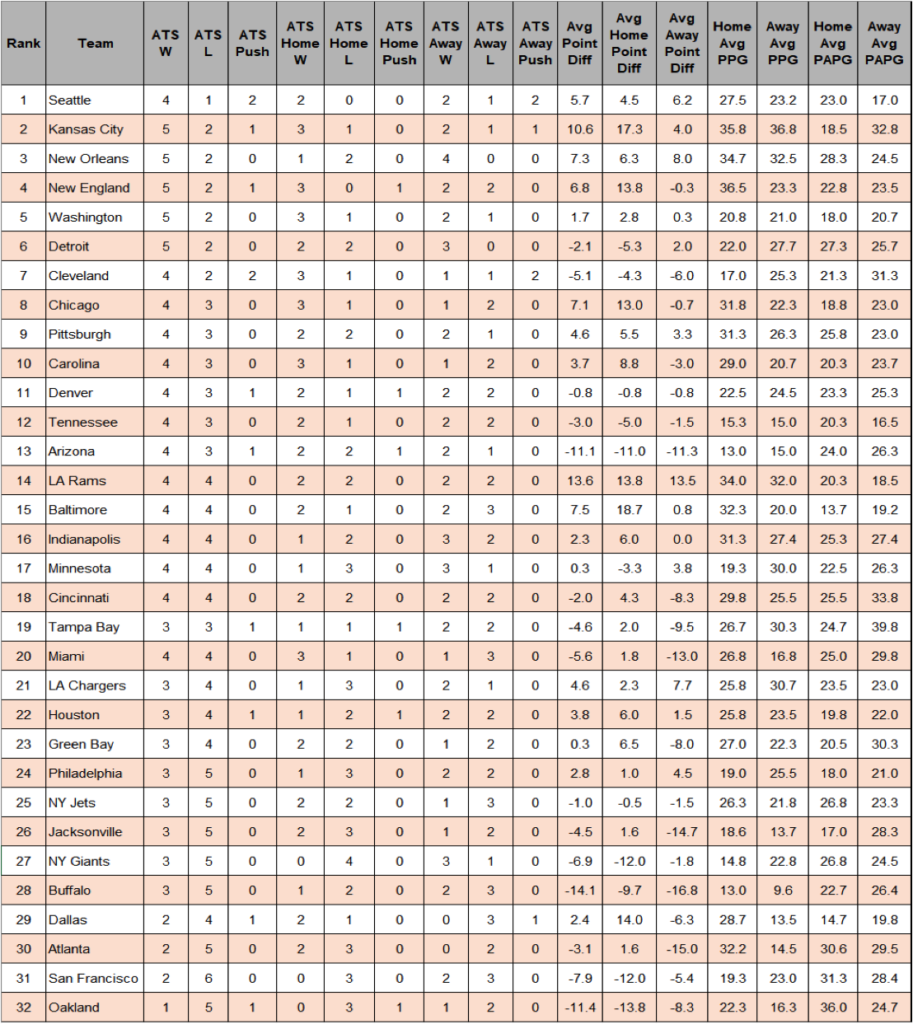 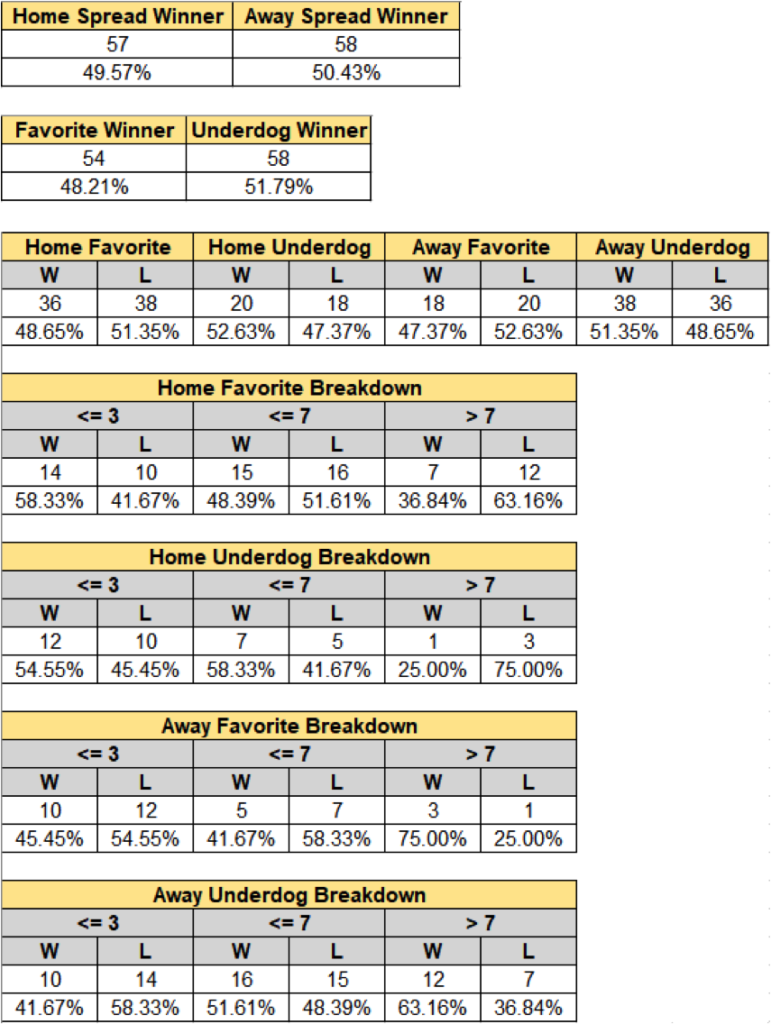 Halfway through the season and most of these numbers have come back close to 50%. The lone spot where you would be making some money with a large enough sample size would be home favorites of more than 7 points. They seem to be struggling to cover so far this year so we’ll have to keep an eye on whether or not that continues.

Here are my Week 9 picks…

At a combined 2-13, the ratings should be off the chart bad for this game. The Raiders have been awful this season and have traded away arguably their best two players. The Niners on the other hand haven’t been much better and have lost six straight even though they’ve been competitive in a few of those games. There’s nothing about this game that would push me definitively in one direction or another so I’m going to have to go with the perceived (I think) better quarterback in Derek Carr to cover the 3 points.

The Ravens are in desperation mode as they try to keep pace with the top of the AFC North. A loss here could potentially put their season in a tailspin and seal the fate of Flacco and Harbaugh. A win and they head into their bye with confidence that we hope can snowball.

After Baltimore dismantled Pittsburgh in Week 4, the Steelers have reeled off three straight wins and have covered in each of those games. Their offense is starting to click and are catching Baltimore at a good time.

Without seeing the injury report, this one is tough for me. If Humphrey, Lewis, Hurst, and potentially Stanley are out, I would lean hard toward Pittsburgh. If any or all those players return this week, it would make me consider taking the Ravens here, but it’s worth taking the 3 points in a series that normally comes down to the wire.

Both of these teams like to air it out and this game should get close to that total of 49. The Vikings fall into my “good teams coming off of losses” bucket, which I like to pounce on as much as possible. As much as I don’t like giving 5 points in a divisional game, I think the Vikings will be able to bounce back this week and cover against Detroit.

Minnesota has been a strange team this year. They’re performing better offensively on the road (19.3 ppg at home vs. 30.0 ppg on the road) and are only 1-3 ATS at U.S. Bank Stadium. Detroit is 3-0 ATS on the road this season.

The Falcons have been decimated by injuries and the Skins should be able to take advantage of their banged up secondary. Atlanta should be able to keep it close, but I don’t see them being able to pull off a win on the road against a better than expected Washington team.

Carolina dominated Baltimore last week and get a Fitzpatrick-led Buccaneers team at home in Week 9. The spread here reflects what we saw last week, and I believe rightfully so. The Panthers dismantled Baltimore’s top ranked defense and should have no problem with Tampa Bay this week.

The Panthers are 9-0 in their last 9 at home winning by an average of 8.78 points, but are 1-4 ATS in their last 5 against divisional opponents. Tampa Bay is 3-1 ATS this season with Fitzpatrick at the helm.

With Hue Jackson and Todd Haley out, this will be a transition week for Cleveland, and a rough one at that. Kansas City is averaging 36.8 points per game on the road and should be able to hold down a depleted Cleveland wideout corps enough to cover the 9 points in this one.

I don’t have a good feeling on this one and will be staying away. I wouldn’t be surprised with either outcome here so I’m just going to have to go with my gut. If you’ve followed along at all, I despise picking the Dolphins and I’m going to continue that this week and go with the J-E-T-S JETS JETS JETS.

A big welcome back to every bettor’s favorite player, Nathan Peterman!!

The Bills have announced that Peterman will be starting this week and he’s getting fed right to the Bears (sorry, I couldn’t resist). Chicago is averaging 22.3 points per game on the road while the Bills are only averaging 13.0 at home. The low total here coupled with the large spread scares me a bit, but I’m still going to go with Chicago covering and Buffalo being lucky to get to 10 points.

This is a prove-it game for both teams. I believe this game will tell us a lot about where these teams will be headed in the second half of the season. Both have been putting up points this season as the Chargers are averaging 30.7 on the road and the Seahawks are averaging 27.5 at home. I look for this game to go over the total, but I would stay away from the spread. If I had to pick, I’d lean Chargers.

Houston opened as underdogs in this matchup, but it quickly moved to a pick-em game. The Texans are rolling after five straight wins and sit at the top of the AFC South. Denver, on the other hand, has lost five of their last six.

The loss of Will Fuller will hurt the Texans going forward as he was the one player on their roster who could blow the top off defenses and open things up for DeAndre Hopkins. I see this being a close, low-scoring game that should go under the total.

Easily the game to watch in Week 9. Arguably two of the top three teams in the NFL will matchup in what Vegas thinks will be a high-scoring game. I’m not sure the game goes quite that high and will consider playing the under here, but these teams will almost certainly put on a show.

The Rams are averaging 32.0 points on the road whereas the Saints are averaging 34.7 points at home. LA should be able to utilize Todd Gurley to control time of possession and keep Drew Brees off the field, which in my opinion is what will lead to the under. Ultimately, I just can’t see myself picking against the best team so far in the NFL as an underdog in this spot.

Something just doesn’t seem quite right in Green Bay. Was it just Ty Montgomery (welcome by the way) being insubordinate or are there deeper problems inside that locker room? It’s hard to say, but at 3-3-1, this is not a good time for the Pack to be traveling to her majesty’s castle. I think this will be a high scoring game that will approach that total, but the Pats will cover the 6 points at the end of the day.

Both teams are coming off of their bye weeks and should be well rested. In the past week, the Cowboys have bolstered their passing attack by adding Amari Cooper from the Oaklavegas Raiders. Dallas also boasts the third-ranked overall defense which will spell trouble for a Titans team that is only averaging 15 points per game away from home this season. I look for Dallas to dominate this matchup and cover the 6.5 points.

I went 3-2 last week on my 5 picks after adding Baltimore late (whoops). This week, I don’t like a ton of games, spread wise, but here are a few that I’ll be scattering a few dollars on: