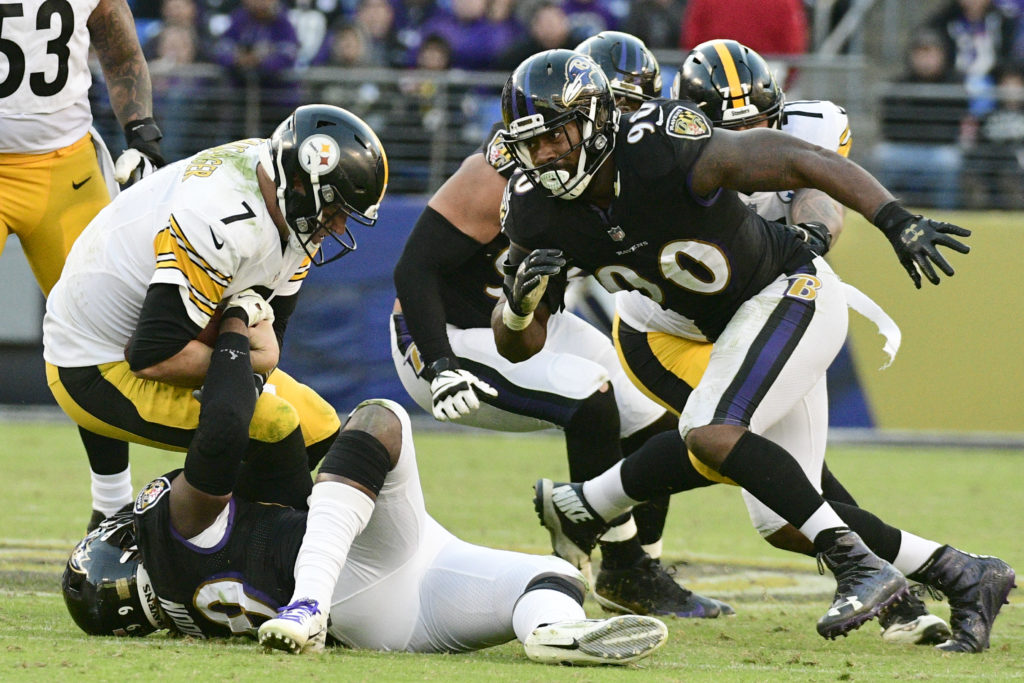 Joe Flacco took a hard hit on the opening series and appeared to be hampered the following possession. He had to stretch out his hip on the sideline following the drive. However, Flacco said afterward that he was physically fine throughout the game. He completed 22 of 36 passes for 209 yards for a 77.2 passer rating. He was sacked twice.

Backup Lamar Jackson saw extensive action and was wide open for a potential touchdown reception in the first quarter, but Flacco did not even look his way. Jackson was later stopped for a loss on 3rd-and-2 from Steelers 4, forcing the Ravens to settle for their second field goal. He ran to the sideline amid a chorus of boos. The Ravens were 1 of 4 inside the red zone and that was a key difference in the game.

The Ravens ran the ball just 16 times. Part of the issue was they got behind early and were forced to pass. Alex Collins finished with 35 yards on nine carries with the Ravens only touchdown. Jackson carried the ball five times for 10 yards. The Ravens inability to establish an effective running has played a vital part of all five losses.

Flacco had a pass just tipped to Michael Crabtree, who could not hold onto a diving touchdown catch in the second quarter. John Brown had a drop late in the first half. However, Willie Snead the IV had a couple of acrobatic receptions and finished with seven catches for 58 yards. Mark Andrews continued to separate himself from the rest of the tight ends and finished with three receptions for 50 yards.  Overall, Flacco simply did not have enough time to get his receivers the ball behind the makeshift offensive line.

The Ravens were playing without both starting offensive tackles: Ronnie Stanley (ankle) and James Hurst (back). Jermaine Eluemunor, who was recently promoted from the practice squad, replaced Stanley, the team’s 2016 first-round pick. Rookie third-round pick Orlando Brown Jr. took over for Hurst. As a result, Flacco took a pounding most of the game. This group was not equipped to handle Pittsburgh’s pass rush. Late in the first half,  Eluemunor had for false start penalty on second down and then was called for a hold one play later, forcing the Ravens to punt.

The Ravens struggled with their pass rush and Ben Roethlisberger was able sit back and pick them apart. Steelers running back James Conner ran for 19 yards in the first meeting. This time, he dominated Baltimore’s defense and finished with 107 yards on 24 carries. Matt Judon managed the Ravens only sack, but the team did not have any takeaways.

The Ravens linebackers struggle in coverage. As a result, Roethlisberger took advantage by throwing to his tight ends in the middle of the field. The Steelers converted 10 of 16 on third-down opportunities, which kept the ball away from the Ravens’ offense.

Ravens desperately needed a turnover in the fourth quarter and instead gave up 73 yards on two passes, one by a backup Joshua Dobbs, who was backed up on his own goal line. Jimmy Smith had two pass deflections later in that drive that forced the Steelers to convert a short field goal for a 23-13 lead. This unit, however, allowed the Steelers to make big plays on third down when the team desperately needed a big stop. While the Ravens offense did struggle, the secondary is just as culpable for this loss.

The Ravens just could not make the proper adjustments on either side of the ball in one of the biggest games of their season. Now, coach John Harbaugh heads into the bye week with questions surrounding his job status. The Ravens need to play much better over the second half, but it still might be too late to for a playoff push.

Willie Snead IV had several key receptions and helped carry the offense. He was one of the few bright spots on an otherwise underwhelming day.  Za’Darius Smith also had one of his better games and had a nice tackle on Roethlisberger scrambling out of the pocket.