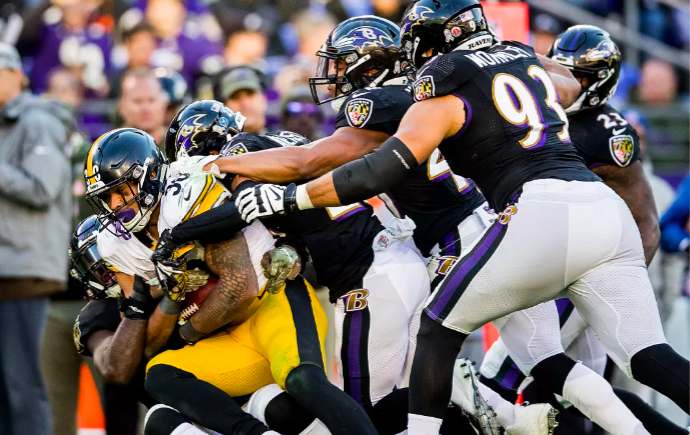 The Ravens lost at home to their arch rivals on Sunday 23-16. One thing I’ve heard lately that from other fans is that teams have figured the Ravens defense out or they don’t make in-game adjustments. I’m really interested in doing a deep dive on how the defense has played in their last three games, but I found some plays in the Steelers game that are perhaps a microcosm of those sentiments. But I partially disagree with those comments. While I agree that teams may be attacking the Ravens defense in certain, similar ways, i.e. using tempo/no huddle, I also think DC Don Martindale is making in-game adjustments to counter how offenses are attacking them.

Let’s take a look at a few examples.

The Steelers are in a shotgun 3×1 formation on this 2nd & 1 play. Focus on the #2 (Smith-Schuster) and #3 (Jessie James) receivers on the right side of the offensive formation running a rub concept.

Tavon Young is covering Smith-Schuster but gets picked by James, leaving JuJu wide open running a shallow crossing route. This wasn’t the last time the Steelers ran this pick concept against the Ravens’ man coverage.

The Steelers are again in a shotgun 3×1 set, this time with three receivers aligned on the left. Again, focus on the #2 (TE Vance McDonald) and #3 (Conner) receivers. Switzer is in the backfield next to Ben.

Inc to Switzer Q2 9_39 all22 pic.twitter.com/sPJlrJioFL

McDonald and Conner run a similar pick concept to the play I described above. McDonald stems vertically up the field, attempting to pick Kenny Young who is in man coverage on Conner’s shallow crossing route. Young does a good job playing under the pick, but notice the adjustment the Ravens defense made on this play.

C.J. Mosley is playing the ‘low hole’ in the middle of the field. His assignment is to “cut” any crossing routes that come into that area of the field. In this context, “cut” means to rob or take away the crossing route. So even if Kenny Young was caught up on McDonald’s pick route, Mosley would be in position to defend Conner’s shallow crossing route.

As Ben drops back, he sees Mosley in position to take away Conner’s route, so he looks for Switzer, who released into the left flat. Fortunately for the Ravens, Ben threw a fade away jump pass in Switzer’s direction that was low and off target. Not sure if Mosley or Young was responsible for covering Switzer, but neither was in position to stop him from picking up the first down, had the pass been on target.

This was a nice adjustment by the Ravens to take away the pick concept, but the Steelers had an answer to that adjustment. Unfortunately for the Ravens, this was a consistent theme throughout the game.

This play caught my attention because of a hand signal that Mosley makes before the ball is snapped. I think he anticipated the pick concept and tried to put his teammates in position to defend it.

Ben is in the shotgun with Conner aligned to his right. TE McDonald shifts into a wing alignment, off the line of scrimmage, just off the right shoulder of TE James. CB Brandon Carr follows because he has McDonald in man coverage. At the snap, we see the same pick concept, this time run by the two tight ends. James sets a pick for McDonald to run the shallow crossing route.

From the end zone angle, you can see Mosley turn to his left and make a hand signal to Kenny Young. This is speculation on my part, but I believe Mosley is signaling “banjo, banjo” by making a motion like he’s stretching a rubber band. A “banjo” technique is when two defenders are playing man-to-man coverage on two receivers by bracketing them and taking the receiver who releases immediately into their area.

On this play, Young covers James, who releases outside, and Mosley stays inside to cover McDonald’s shallow crossing route. But there appears to be a breakdown in communication because Carr continues to follow McDonald across the middle of the field and no one covers Conner, who releases into a checkdown route. Ben dumps it off to Conner, who is tackled by Jefferson at the Ravens one-yard line. The Steelers scored a TD on a Roethlisberger QB sneak on the next play.

The Steelers come out in another 3×1 set. This time Ben is under center with a bunch look on the three-receiver side. Take a deep breath. This next bit is going to be pretty football nerdish, but stay with me. It’s necessary to illustrate my point. Here are what I think the blocking assignments are on this run play:

Conner shows good patience to the hole then explodes through the hole. He runs through an arm tackle attempt from Wormley, makes two guys miss, then finishes the run with low pad level to pick up an extra yard or two. I’m going to stay away from the ‘Steelers don’t need Le’Veon” narrative, but Conner looked really good in this game.

At the snap, the Steelers show a similar blocking concept to the play above:

C blocks down on NT (Williams)

The Ravens adjustment to this was to align a 3-technique to the side where they anticipated run. They also bring Eric Weddle down into the box, aligning him on the line of scrimmage outside of Smith on the left side. This time the Ravens have given themselves a numerical advantage to take away the run concept that gained 12 yards just two plays prior.

But despite similar blocking assignments and run action to Conner, this is a pass play. Ben throws a quick screen out to Brown, who breaks tackle attempts from both Young and Marlon Humphrey on his way to the end zone.

Although the personnel and formation the Steelers’ employed was different on this play, I think the Ravens may have anticipated a similar run concept to the one two plays prior. It’s pure conjecture on my part, but the way they adjusted their defensive line and dropped Weddle down into the box leads me to that assumption. The Ravens had enough defenders in the box (eight, if you count Suggs aligned outside TE James) to stop that run. Credit the Steelers with some clever sleight of hand, i.e. showing one thing but doing another.

These were just a few plays, certainly not the only plays, where I think the Ravens made in-game adjustments to try to counter what the Steelers were doing. Some will stay the fact that the Steelers had an answer for the Ravens’ adjustments, means the Ravens were ‘out-coached.’ That’s not an unreasonable argument, but I see it slightly differently. I believe we’d reach a different conclusion if the adjustments were executed consistently. I don’t see it as being ‘out-coached’ if you put your players in positions to have success but they either don’t execute at a high enough level or the opponent makes a great adjustment to your adjustment.

Maybe it’s blind faith, I’m not sure. But I have confidence that this coaching staff and group of players will do some self-scouting over the bye week and continue to compete and fight for the remainder of the season.