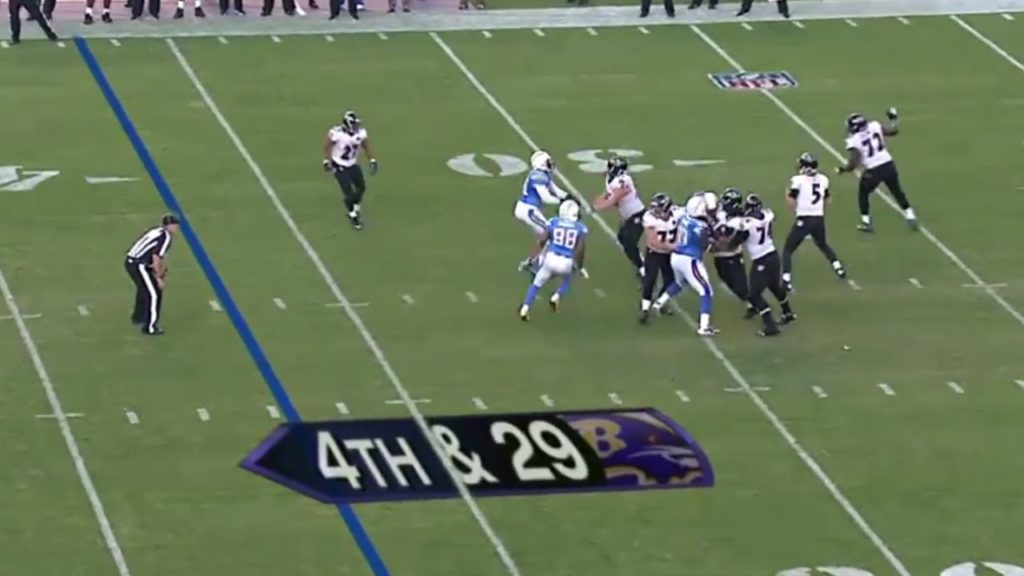 The down and distance might not mean much to NFL fans outside of Baltimore, but here in Charm City, it’s a play that changed sports history forever.

With 3:09 left in the game the Ravens took over on their own 40-yard line following a 23-yard kick return by Jacoby Jones. Five plays later following a few sloppy plays, a holding penalty and a sack by former Raven Antwaan Barnes who forced a Flacco fumble which was recovered by Michael Oher, the Ravens faced a 4th-and-29 from their own 37.

It was Hail Mary time!

Inexplicably, Joe Flacco checked down…imagine that, and threw to Ray Rice behind the line of scrimmage. No Hail Mary. Instead, Rice delivered an Act of Contrition for Flacco.

History may have changed if not for the efforts of Ray Rice, an annihilating block by Anquan Boldin or even the fumble recovery by Michael Oher. But those things fell the Ravens way, enabling them to complete an amazing four-game playoff sweep. If none of those things happen, it’s unlikely that the Ravens win Super Bowl 47. And if that doesn’t happen, Joe Flacco probably isn’t a Raven today OR at best he’s playing for a lot less.

Just goes to show you how much one play can change history.

Hey, did I tell you the one about the Mile High Miracle?