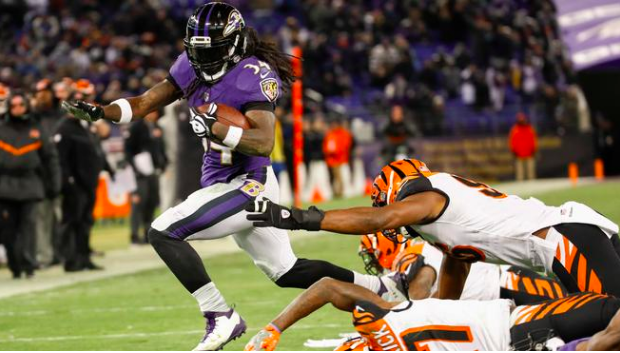 — Cooper Kupp (ACL) was placed on IR. Josh Reynolds should be added where available.

— Randall Cobb is out Thursday night. With Geronimo Allison on IR and no Cobb, Marquez Valdes-Scantling is must start.

— Green Bay at Seattle starts off the week on Thursday.

— Kansas City at Rams closes us out Monday in a showdown that will produce a ton of fantasy points.

Ravens Fantasy Picks of the Week

Alex Collins: Regardless of who is starting at QB, Joe Flacco or Lamar Jackson, they are going need to rely heavily on the run game. Neither QB should be asked to throw much due to injury or inexperience, respectively. That’s why Collins is in line for a huge fantasy day. He has found the end zone four times in the last four games and will get a heavy workload against the Bengals, who have allowed 5 yards per carry.

Defense: At one time I said they were a must-start every week, but recently that has not been the case. Expect a rebound this week after a bye. With perennial Raven killer A.J. Green out for the game, the defense should be able to blitz more without having to drop extra defenders in coverage. I like them as a top 10 fantasy play this week.

QB: Dak Prescott: The Falcons have allowed an average of 21 points to QBs over their last four games. Dak looks to follow-up his 20-point performance from last week against a soft Falcons defense.

RB: Leonard Fournette: In two games against Pittsburgh last year, Fournette scored 5 TD and racked up 290 yards on his way to averaging 31 points in those contests.

WR: Robert Woods: When you talk about the Rams offensive weapons, Gurley and Cooks come to mind first. Woods is the forgotten weapon. He leads the team in targets and receptions and has as many receiving TD as Cooks (3). Outside of Week 1, Woods has scored double-digit fantasy points in every game. With the Chiefs allowing 43 pass plays of 20+ yards, Woods should see his fantasy output at an all-time high.

TE: Jimmy Graham: I love revenge games, and this is a great match-up for Graham. The Seahawks allowed two TD to Rams tight ends last week. Why is that relevant? Because as powerful as the Rams are, they don’t involve their TEs in the passing game! The fact they scored twice is great news for Graham owners because without Cobb and Allison, Graham will play an even bigger role in the offense.

QB: Kirk Cousins: Cousins has been anything but stellar over the last month averaging a mere 15 points a game – not something you want from a preseason top 10 fantasy QB. Couple that with the Bears defense holding QBs to an average of 14 points in home games, it does not bode well for Cousins to have a breakout week.

RB: Lamar Miller: The Redskins have held the following RBs to under 40 yards rushing this season: Barkley, Elliot, Kamara and David Johnson. Miller is not in even close to being in their class and given his lack of productivity in the passing game, it may be worth the time to find a fill-in for the week.

WR: Tyler Boyd: It’s clear to see that without A.J. Green, this offense takes a step back especially in the passing game. Boyd was held to three catches last week without Green on the other side. I expect Baltimore to come out with a revitalized defense after the bye. Boyd is a TD-or-bust play this week.

TE: Zach Ertz: Just as I said with Tom Brady last week, I get that you are starting Ertz regardless. But, temper expectations against the Saints defense, which has allowed just one TD to tight ends this year and have held all but one (O.J. Howard, 54) under 50 yards receiving.

QB: Josh Rosen: This is a cheap DFS option. Oakland has allowed an average of 18 points to QBs on the road this year.

RB: Doug Martin: You could do a lot worse with McCoy, Chubb, Drake, Michel, White, and Breida on byes. The Cards are allowing 4.5 ypc and they have allowed the second most rushing TDs this year (13).

WR: Josh Reynolds: With Kupp out for the year, Reynolds steps into the third receiver spot. In his last start (when Kupp was out), he racked up 19 points.

TE: Evan Engram: Engram has seen 14 targets over the past two weeks and now is as good a time as any for a breakout game against the Bucs. With George Kittle on a bye, Engram is a nice fill-in.