— Not only did we as Ravens fans need the Patriots to take care of business Sunday, but I also had them as one of my better bets of the week. They proceeded to get rolled by the Titans, who are now situated nicely to steal the last wild card spot with a relatively easy remaining schedule.

— The Jets S-U-C-K SUCK SUCK SUCK. I assumed Nathan Peterman would be starting for Buffalo, but even with the news of Matt Barkley starting later in the week, I still would have picked the Jets to win here by double digits. Instead, they got steamrolled.

— Last but not least, the Atlanta Falcons. You had me fooled. After dismantling Washington in Week 9 for their third straight win, I thought they would stroll right through Cleveland for their fourth. However, Baker Mayfield was efficient in throwing for three touchdowns and Nick Chubb ran all over the Falcons defense. 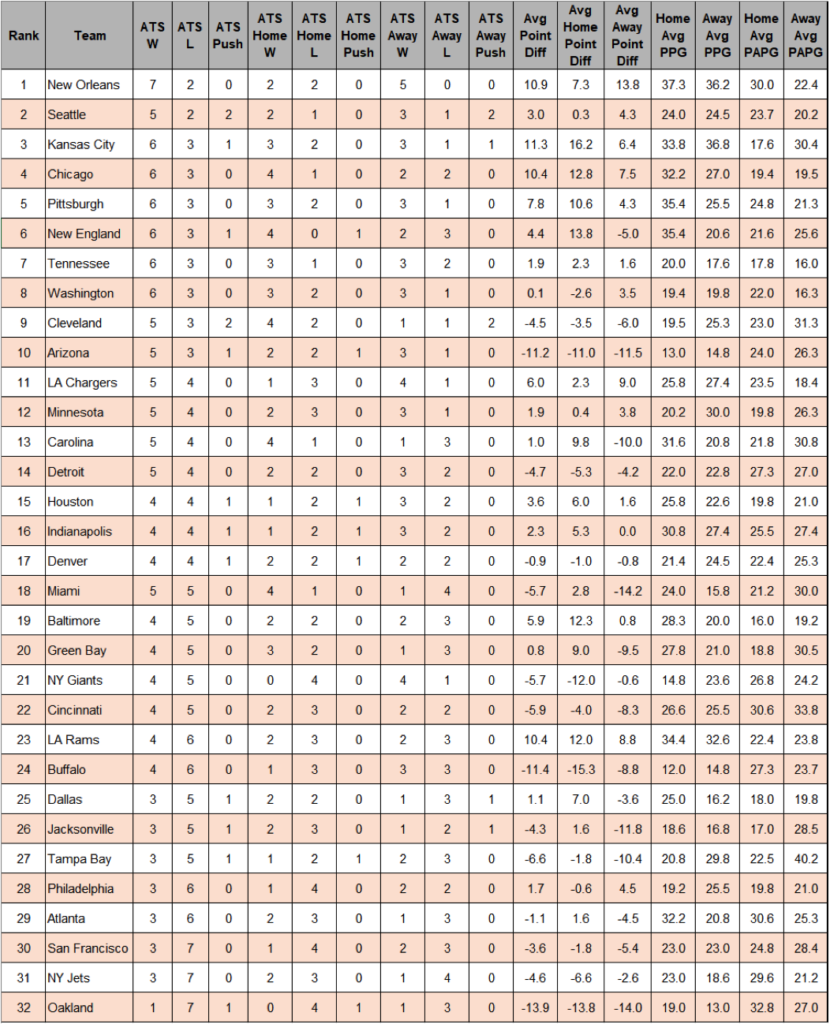 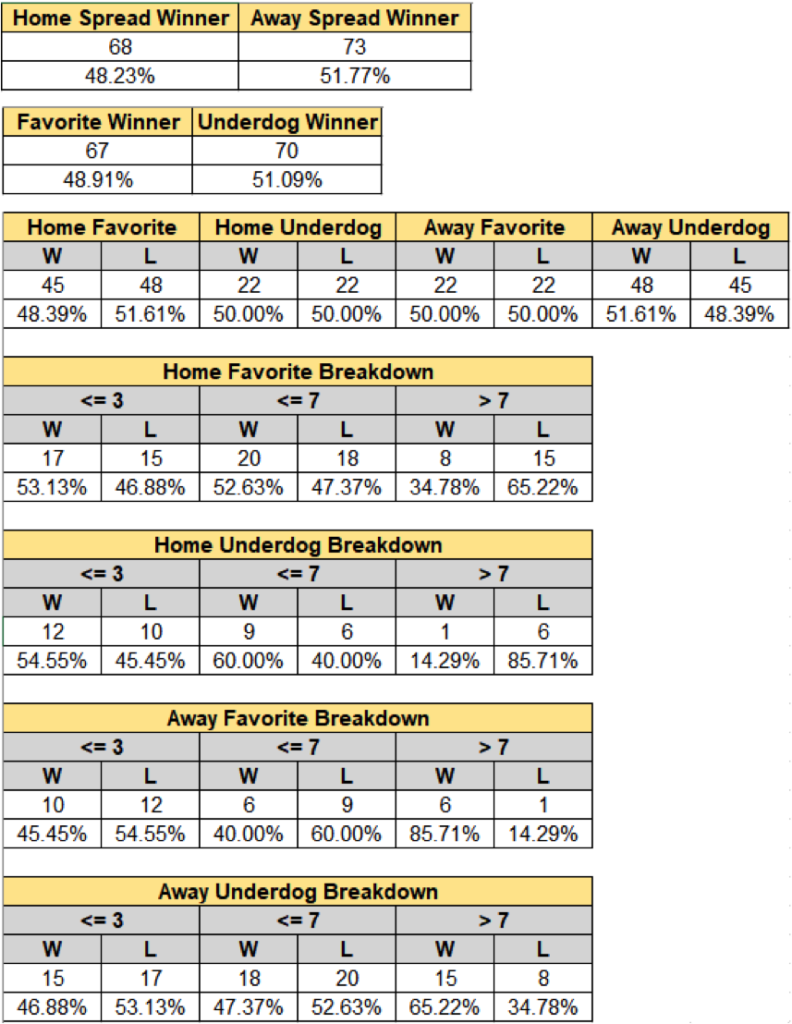 Spreads of more than 7 points continue to be where you can be making money this year. I typically like to stay away from those games, but this year, that would be a mistake.

Seattle is coming off of two straight losses to two of the better teams in this year’s NFL. Green Bay bounced back from their own two-game losing streak last week and beat the Fins easily. The top ranked Seahawks rushing attack (152.2 yards per game) will be the difference here as they’ll be able to control the ball and get the win at home.

One team looked improved last week, and the other looked awful in a game that players said they were unmotivated for. Both, however, are desperate for a win here. This game will come down to whether or not the Falcons defense can stop Ezekiel Elliott. I think they’ll do just enough on defense to limit the Cowboys rushing attack and force Dak Prescott to beat them through the air.

Cincinnati Bengals vs. Baltimore Ravens (off the board)

This one is off the board for obvious reasons. No one knows who will be playing quarterback for the Ravens in Week 11. Either way, the Ravens should be favored here and I think the swing will only be a point or two if Lamar Jackson starts under center. To me, this is looking like a spread between 3-5 points if Flacco starts and 2-4 if Jackson starts. I like Baltimore in this spot though coming off a bye and facing an A.J. Green-less Bengals team.

My Pick: Off the board, but probably Baltimore…

Tampa Bay comes into this game boasting the top passing attack in the NFL and they rank 12th in points per game, but they are consistently doomed by their propensity to turn the ball over. I don’t think that’ll be a problem this week against a Giants team that has only six interceptions through ten weeks of the season. The Bucs will keep the ball and win outright.

Carolina had a few extra days to reflect on the drubbing they received in Pittsburgh last Thursday night and should be ready to go this week. Before last week, they had been one of the hotter teams in the NFL and I don’t put a ton of stock in their Week 10 loss on the road on a Thursday night. That is a tough spot for most teams. Detroit, on the other hand, have lost their last three games by a combined 41 points.

One of the tougher games of Week 11. This looks like a potential trap, as bettors may look at Tennessee’s win against her majesty in Week 10 and wonder why they’re underdogs against this Colts team. I’m going to take the bait though as I think the Titans are the better team here and they have the ability to slow down the Andrew Luck-led offense.

Pittsburgh was embarrassed by Jacksonville last year, and I think they keep that in the back of their mind heading into their matchup this week. These teams couldn’t be heading in more opposite directions. Pittsburgh is rolling and Jacksonville is reeling. Those trends will continue this week as the Steelers look to keep hold of the AFC’s 2nd seed after the Patriots loss last week.

Houston is coming off their bye after six straight wins and head into Washington to face a Redskins team with an offensive line in shambles. To win, the Redskins need to play ball control and limit turnovers. I’m not sure they can do that this week with their line in the shape that it’s in against a solid Texans defense.

The Chargers have been hot this year, but 7 points is a lot for me in a divisional game at a home stadium that gives no real home field advantage. On the road this season, Denver is averaging 24.5 points per game while giving up 25.3. The Chargers are scoring 26.6 at home while giving up 20.8. Those numbers are too close for me to give LA 7 points so I’ll take the Broncos to cover even though the ATS trends don’t point me in that direction.

The race for the top pick is on, but the Cardinals have not looked nearly as bad as Oaklavegas as looked this season. If David Johnson’s Week 10 performance wasn’t a mirage, the Cardinals may have a semi-formidable offense, at least against a terrible Raiders team. I will probably pick against Oaklavegas for the rest of the season because they’ve shown no life and no fight. They have veterans asking to leave and are simply imploding. Arizona should win and cover.

Both teams need wins here for different reasons. The Eagles need a win to stay relevant and the Saints need a win to stay atop the NFC. At first, I had the Eagles here to cover, but the more I looked at this game, the less I saw how the Eagles can keep this game close with a decimated secondary. Drew Brees should be able to have his way with Philly’s patchwork back end.

This is a big game for the Bears. A home, Sunday night game for the division lead will have Soldier field rocking. For better or for worse, I tend to put a lot of stock in teams coming off bye weeks and that’s what we have here. Minnesota won four of their last five coming into their bye week and the extra week to prepare is something that must be considered. I think this will be a very close game and because of that, I have to take the points Vegas is giving Minnesota in this crucial division matchup.

One of the most anticipated games of the NFL season has now been moved from Mexico back to LA. With that move, the spread jumped another point in favor of the Rams. That extra point is convincing me to stay away from this game, but ultimately, the total is telling us it’s going to be an entertaining game. Both teams possess high powered offenses and for me, the difference in this game is the Rams defense. They have been much maligned all season, but I think they get up for this game. They won’t completely stop the Chiefs, but I think you’ll see a different defense in Week 11, who will put up enough stops to get the win, and cover.

1-2-1 record last week with a few games that I was very confident in. There are a bunch of good matchups this week, especially in prime-time spots which should make for an entertaining week. Here are a few of my best bets:

Good luck to everyone!