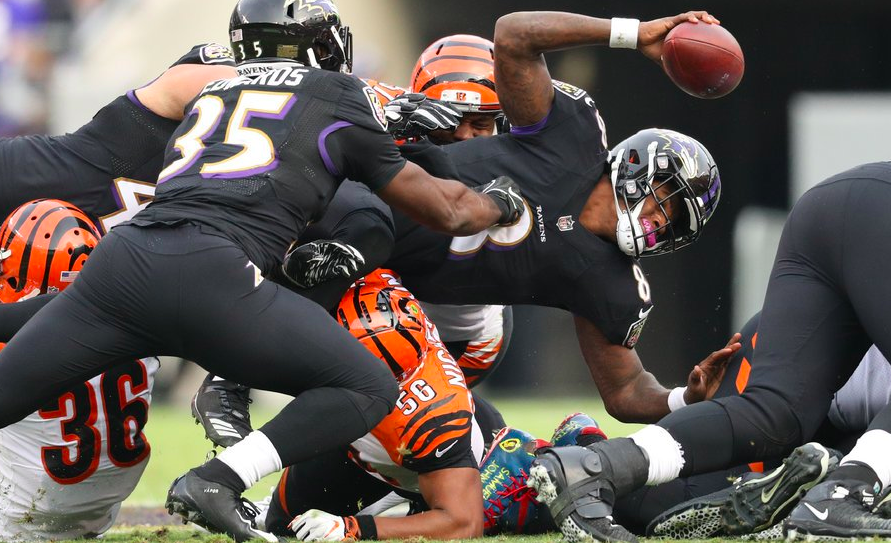 The Ravens kept their playoff hopes alive with a hard-fought 24-21 victory over the Cincinnati Bengals. Baltimore also avenged a 34-23 setback to Cincinnati in Week 2. The Ravens and Bengals are now tied for second in the AFC North at 5-5.

Rookie first-round pick Lamar Jackson made his first start and energized the offense. He set a franchise record with 117 yards rushing as a quarterback. Jackson also completed 13 of 19 passes for 150 yards with an interception. It wasn’t always pretty, but it certainly was effective.

The Ravens finally committed to the running game with 265 yards, a season-high. Rookie Gus Edwards had a breakout game, finishing with 115 yards on 17 carries with a touchdown. He etched his way into the starting lineup.

Left tackle Ronnie Stanley had to leave the game several times with an undisclosed injury. His absence disrupted the flow of the line. However, the Ravens played aggressively, and at times, pushed around the Bengals’ stout front seven. Jackson was sacked twice, but he did hold the ball too long in the pocket.

Jackson only attempted 19 passes so there wasn’t much work for the wideouts. Still, Willie Snead had a big game and brought an edge to the offense by extending drives. He finished with a team-high five receptions for 51 yards. Tight end Nick Boyle also caught all four of his targets for 36 yards.

The Bengals could not get any traction with their running attack, finishing with just 48 yards on 16 carries. Brandon Williams and Za’Darius Smith were effective shutting down lanes. Joe Mixon was held to 14 yards on 12 carries. Matt Judon and Chris Wormley combined for a sack.

C.J. Mosley and Kenny Young tied for the team lead with four tackles.  Patrick Onwuasor also had a strong game. However, this unit once again struggled to cover tight ends. That area is still a major work in progress

Cornerback Marlon Humphrey came up with one of the biggest plays of the game, breaking up a pass attempt from Dalton to Cody Core on a 4th and 3 that sealed the win, erasing memories of last year’s debacle in the regular-season finale.

Anthony Levine Sr. had several nice plays as the Dime. Dalton was 19 of 36 for 211 yards with a pair touchdowns. Tyler Boyd had four receptions for 71 yards.

No major mistakes by this unit. Justin Tucker converted field goals from 24, 28, and 56 yards.

Coach John Harbaugh quieted talk about his job security for at least a week. Don Martindale had a game plan that mostly contained the Bengals. However, Snead had a heated conversation on the sideline with offensive coordinator Marty Mornhinweg about being more aggressive.

In the end, the Ravens pulled off a huge win.