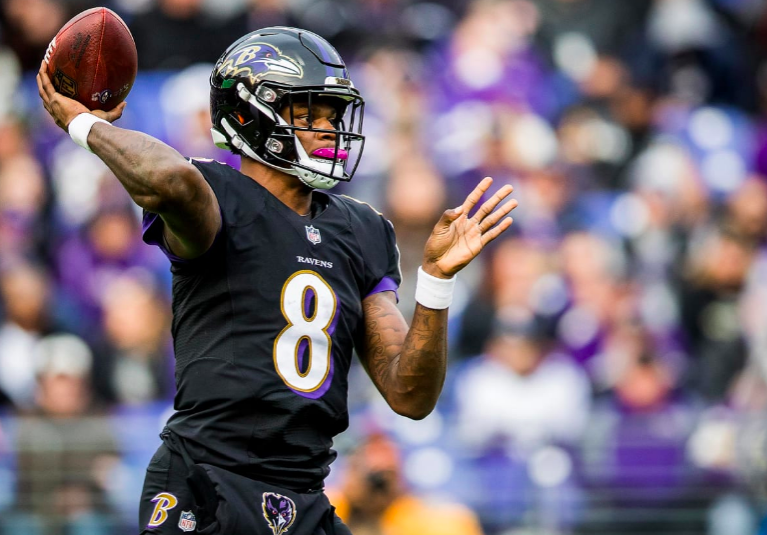 Maybe you should keep an eye out for draft-promo-codes.com for Sam as a backup fantasy QB.

You know who this week’s edition is going to be about: Lamar Jackson. But first, I want to acknowledge the performances of RB Gus Edwards, CB Marlon Humphrey, and the Ravens defense who stopped the Bengals on 4th & 3 to seal the game. Edwards was decisive and ran through contact all game long. The defense made the plays it needed to make, when they needed to be made.

Now back to Jackson. By now you know he carried the ball 27 times (including 3 kneel downs, so actually 24 competitive carries) for 117 yards, but I’m more interested in looking at what he did as a passer. Jackson is a QB but it’s his play from the pocket that critics point to when suggesting he’d be better off at another position.

You’ve probably heard it by now…

‘Jackson can’t read defenses…he’s always looking to run…he had a low completion percentage in college…he’s not accurate enough to play in the NFL.’

Believe what you want, I’m not in the conversion business. But I think if you objectively look at the things I illustrate in the following plays, you’ll see that those criticisms are flat out inaccurate.

The Ravens are in 10 personnel, 1 RB, no TE and 4 WRs. Jackson is in the gun, flanked by RB Ty Montgomery on his left. John Brown, Willie Snead and Chris Moore are in a trips bunch set on the left side of the formation. Michael Crabtree is the single receiver on the right side.

The Bengals are in a split field coverage, i.e. 2 deep safeties. CB Dre Kirkpatrick (27) appears to be in man coverage on Crabtree’s shallow dig route. Moore runs a seam route (in between the numbers & hash marks) that runs off MLB Hardy Nickerson Jr. (56) and occupies SS Shawn Williams. Snead fights through a jam at the line of scrimmage by SCB Darqueze Dennard (21) and takes an outside release into his fade route. CB William Jackson (22) plays a trail technique (slightly behind) on Snead’s route. Brown, like Snead, also initially takes an outside release, stemming his route vertically then breaking inside and across the middle of the field, gaining inside leverage on Dennard. WLB Jordan Evans (50) dropped to the hook/curl zone on the other side of the field and is in position to cover Brown’s crossing route.

Now that we have an idea of the receivers’ routes and the coverage, let’s take a look at this play from the end zone angle.

Jackson takes a very short, quick drop and starts his progression. He makes his 1st read towards the right to Crabtree’s shallow dig route, starts his throwing motion, but he sees the route is covered. So he goes to his next read, the routes on the left side. He resets his feet and is position to make a throw but again, sees the routes are covered. Next he feels pressure from DE Carlos Dunlap (96) so he spins, tucks the ball and prepares to scramble. He starts to scramble to his left, then cuts back to the right but once he feels open space, he gets his eyes back downfield and the gets the ball in position to make a throw.

Instead of continuing to run across the field and towards the right sideline, Brown uncovers by working back to the middle of the field. Jackson finds a passing lane and delivers an accurate ball to Brown’s upfield (inside) shoulder. This ball placement allowed Brown to turn upfield and gain some yards after catch.

This play put the Ravens in field goal range and Justin Tucker converted on a 56-yarder. A lot to like from Jackson on this play: hung in the pocket, went through his progression, extended the play when he felt pressure, kept his eyes downfield and got the ball to one of his playmakers in space.

The Ravens come out in 11 personnel (1 RB, 1 TE, 3 WRs) with Jackson in the gun flanked by Montgomery on his left. Brown, Snead and TE Mark Andrews are in a trips bunch set on the right side of the formation. Moore is the single receiver on the left side.

Let’s focus on the routes by Andrews and Snead. They use a ‘switch’ release off the line of scrimmage. Andrews was aligned inside Snead (closer to RT Brown Jr.) but releases outside him; Snead was aligned outside Andrews but releases inside him. They both stem their routes vertically in the seam, but MLB Nickerson Jr. relinquishes the inside leverage he had on Snead to bracket Andrews with SCB Dennard. Snead bends his route inside the hashes, in front of the FS Jessie Bates playing the deep middle ⅓ and inside of the weak-side SS (Williams) rotation.

From the end zone angle, you see how ‘quiet’ Jackson’s feet are in the pocket. He takes his drop smoothly and when he hits his last step, he subtly hitches up in the pocket to deliver an accurate ball to Snead. Again, I really like the ball placement. He doesn’t lead Snead across the field; instead he stops him with the ball by putting it right on him. This allowed Snead to protect the ball and protect himself against the hit coming from SS Williams.

This play is even more impressive when you put it in context. Jackson was sacked for a loss of 7 yards on the previous play. Now he faced a 2nd and long situation, with his team trailing by 8 points, backed up in his own territory. Despite that adversity, Jackson finds Snead for 17 yards and a first down. After this play, Jackson led the team on an 8-play scoring drive that tied the game (TD and two-point conversion).

Let’s set the stage a little more. The score is tied 21-21. RB Buck Allen gained 2 yards on 1st down and Edwards only 1 yard on 2nd down.

Jackson is in a 3×1 shotgun look, flanked by Montgomery on his right. Brown and Snead are split to the left of the formation, Andrews is in-line on the left and Crabtree is the single receiver on the right side. The Bengals have FS Bates in the deep middle ⅓. The outside CBs appear to be in man coverage, leaving 4 underneath defenders covering the hook, curl and flat zones. Again, let’s focus on the routes by Andrews and Snead.

They both initially stem their routes vertically. Andrews appears to be creating a rub/pick for Snead, who hitches under Andrews’ route in front of MLB Nickerson Jr., about 2 yards shy of the first down. Andrews continues to get depth, getting behind Nickerson Jr. SS Williams dropped down to cover the weak-side hook zone and was in position to take away a throw to Andrews. But Andrews continues to roll towards the right sideline as Jackson scrambles out of the pocket. Montgomery leaked out to the right flat and appears to draw SS Williams and WLB Evans towards him as Jackson continues scrambling to the right.

From the end zone, you can see Jackson read the route combination between Andrews and Snead. He sees it’s covered, gets pressure inside from DT Geno Atkins so he leaves the pocket. Jackson has his eyes downfield as he scrambles to his right and throws a beautiful ball to Andrews, hitting him in stride, but over the outstretched arm of ILB Evans. Again, notice the ball placement: over an underneath defender and away from a trailing defender (FS Bates). How often have we seen QBs make this throw on the run but throw the ball behind the receiver, bringing the trailing defender back into the play?

This was a key first down conversion. 8 plays later, the Ravens take the lead (24-21) on a 24-yard Tucker field goal.

The Question and the Answer

Lamar Jackson is a QB. He can play from the pocket and can throw the ball accurately. He reads defenses, has improved his mechanics and throws with a sense of timing and anticipation.

By no means am I saying that he’s a finished product. For however long he plays the rest of this season, I fully expect him to experience the ups & downs that all rookie QBs face. As impressed as I was with his 1st start, Jackson certainly has areas where he can improve and be more consistent.

I’ve heard it said that development isn’t always linear. Just because you see a negative play, it doesn’t mean the player isn’t growing.