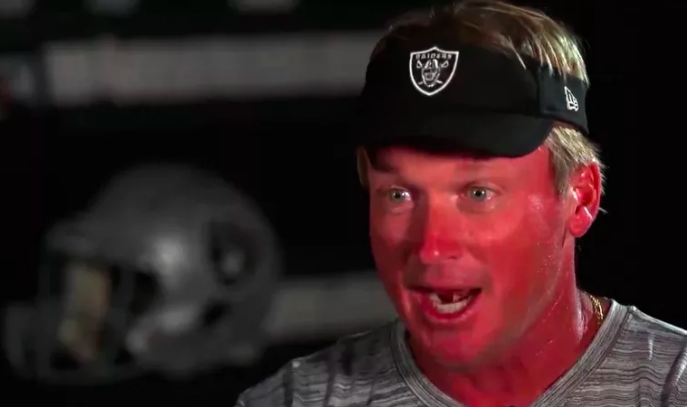 As #LamarJacksonSZN rolls on, let’s take a look at all the stats, notes, quotes, and more to get you ready for Ravens-Raiders. 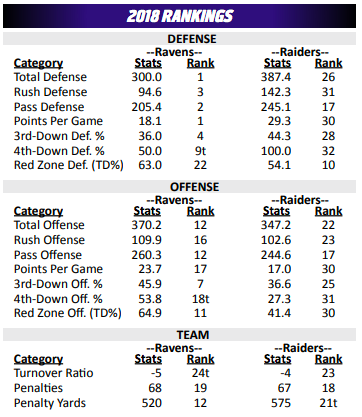 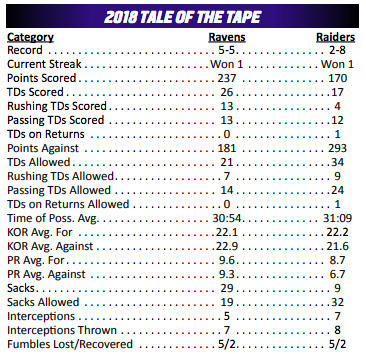 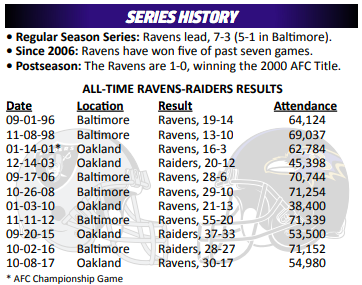 S Eric Weddle on QB Lamar Jackson after the rookie threw his first-career INT in the Week 11 win vs. Cincy:

“What did he do on the next drive? He went down and scored. It was like nothing happened. And you can’t teach that. … His physical ability, we see it every day. So I expected that. But to overcome adversity early on in his first start [is impressive]. I just think with his composure, we’re all excited about him.”

LB C.J. Mosley on QB Lamar Jackson in the win over Cincy:

“It’s crazy; he looked even faster in the game than he does when we practice against him every day. He’s just got a giddyup that no one sees every day. It was amazing seeing him out there playing and getting his first win. Hopefully we can start a good run now.”

CBS analyst and former NFL QB Trent Green on the Ravens’ defense in an offense-centered league:

“I think any time you can have a great defense like the Ravens have put together, that’s good football. You can win a lot of football games that way.”

CB Jimmy Smith on what makes him confident the Ravens can go on a playoff run:

“I’ve got a great coaching staff. I’ve got a great group of veteran running backs who told me to always be prepared. From Day One when I came in here, they told me what it was going to be like. This game, a lot of things played into it, and you’ve always just got to be ready.”

GETTING TO KNOW YOU ~ Q&A with Tony Jefferson

You’re not huge into Thanksgiving. Why is that?

“Yams, turkey, mac and cheese and some stuffing.”

“Christmas. Actually, my birthday. My birthday is a holiday.”

What’s the best birthday you’ve ever had?

“My best birthday was when I was 16, when I got my first car. It was a 1997 brown Toyota Camry, and my dad bought me some rims. I got some money and put a surround sound in the back. I think I drove that whole day.”

What is something people would be surprised to know about you?

“They’d be surprised to know that I know how to salsa dance. I went to a bunch of quinceañeras when I was in high school, so I got really good at Mexican dances.”

How long have you been able to speak Spanish?

“Ever since my parents moved to Chula Vista, which was a more predominantly-Mexican city, I started being around [the language] more, taking class. We were required to take a language, and I obviously took Spanish, because everybody else was speaking it.”

What benefits do you think knowing Spanish has now?

“Being bilingual helps you with job opportunities, so maybe after football that will help. And, just going places. In San Diego, Mexican shops are huge, so sometimes you want to be able to know what they’re saying, and you get a lot more ‘kudos’ points in San Diego when you know Spanish.”

You’re a big Phoenix Suns fan. How did that originate?

“I was eight years old, and my basketball team was the Suns, and we were purple. I guess just being young and being on the Suns, I just liked them. I started buying posters and Suns stuff, and I just stuck with them ever since.”

Who is your favorite Suns player of all time?

What’s the best meal that you’ve ever had?

You take a Twitter break during the season. What are your reasons?

“In the offseason, I find myself, sometimes, always on my phone and always on social media, and personally, I don’t like that. I don’t like being on my phone a lot. Also in the offseason, I work out, and I play with my son, but there’s not really that much else to do. Sometimes, I just find myself on social media too much. I think it can be a distraction, so I stop during the season. Sometimes people talk a lot of crap, and I don’t like to see it, because not that I can’t control that myself, I just don’t want to see it. I don’t like negative energy, and there are a lot of negative people in the world. Twitter, as well as Instagram, gives them a voice to kind of say what they want in a negative nature, and I’m just not about that. I’m about spreading positive energy, so I don’t like seeing that, and I don’t want to give them the opportunity to think they are affecting me with their fingers.”

Baltimore WR Michael Crabtree spent the 2015-17 seasons on Oakland’s roster, recording 232 receptions for 2,543 yards and 25 TDs during that span.

Oakland G/T Kelechi Osemele was Baltimore’s second-round pick of the 2012 NFL Draft. He started all 16 games as a rookie and helped the Super Bowl XLVII-winning Ravens score the second-most points (398) in franchise history.

Raiders CB Rashaan Melvin spent part of the 2014-15 seasons on the Ravens’ roster.