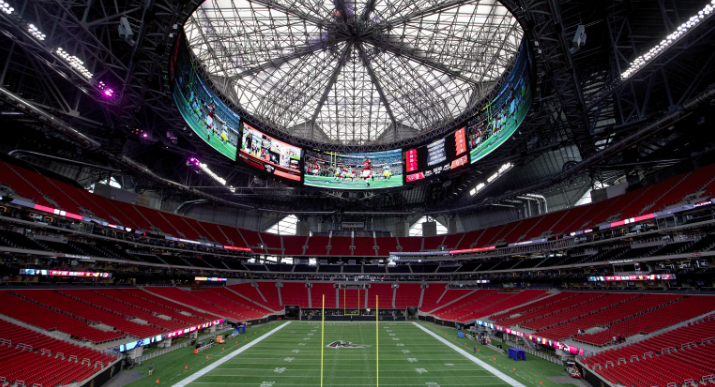 All the stats, quotes, notes, and more to get you ready for Ravens-Falcons, in our weekly Crab Bag! 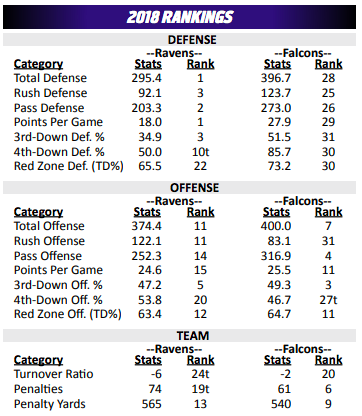 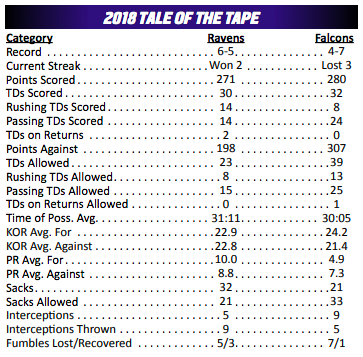 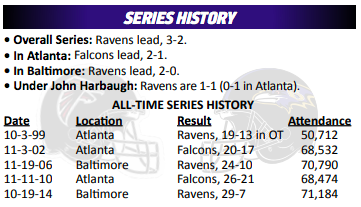 LB C.J. Mosley on if anything has changed in the last three weeks with the Ravens:

“Nope, [we have the] same mentality. [It was a] great game [on Sunday vs. Oakland], but Atlanta is a great challenge, and that’s just the way we’re looking at it. Week-to-week, game-by-game, we just move on to the next opponent. We know what they bring: great quarterback, great receivers, great offense. We’ve got a lot of work to do.”

“Obviously, Jackson’s athleticism is off the charts, and it makes him so much fun to watch, but the quality that still impresses me most about him is just his presence. You could tell from the first day of rookie minicamp that teammates gravitated toward him and wanted to be around him. He has swagger, but there’s also a humbleness about him that I think teammates, veterans and rookies alike, respect. As Marlon Humphrey noted, you would never know that Jackson won the Heisman Trophy with how he acts. Jackson doesn’t appear overwhelmed by the moment at all, and he competes like heck.”

“We just have to keep winning. We just have to keep going out there and preparing for the team and keep executing and keep going out there and having fun. We can’t ever get discouraged. It’s a tough league to win in, and we’ve played some good teams. Those teams [we lost to] weren’t slouches, and we’re still playing good teams. We’re just coming up with those plays that win games.”

G Marshal Yanda on the Ravens’ run attack the past two weeks, totaling over 225 yards each game:

“Obviously, we want to win the game any way possible, but getting to run the football and getting those carries, yeah, it’s awesome. We really enjoyed it. It’s fun. I enjoyed running the football, but I understand, too, that we’re going to have to pass a certain amount to get that done. But yeah, O-linemen love pounding the rock.”

GETTING TO KNOW YOU ~ Q&A with Matt Skura

Who is the toughest opponent you’ve had to block?

“In college, it was definitely Aaron Donald from Pitt. He was really good for obvious reasons. When I came into the league, it’s been guys like Cameron Heyward, Geno Atkins and Mike Daniels. You find out what real strength and power and speed is from those guys.”

What’s the most difficult part of defending the pass rush?

“With the defensive linemen, it’s trying to react to where they’re going to go. A lot of defenses do a really good job of disguising where guys are going to go before the snap. You try to have some anticipation of that. Also, just trying to defend guys who are really fast and powerful – that’s tough.”

You came into the league as an undrafted free agent. Do you think being undrafted has motivated you as you progress in your career?

“It’s humbling. Every guy who is in the draft process feels like they deserve to be drafted. I was All-ACC, All-American and had started for two to three years. I knew I might not be a first-round pick, but maybe a later-day pick. I think when [you’re not drafted], you have something to prove. You have to work twice as hard to get to the same level as the guys who were drafted. You have to work harder and do the little things even more right than everyone else. There are a lot of people that doubt you and ask, ‘Why were you undrafted?’ It makes you mentally tougher.”

Along those lines, the Baltimore coaching staff constantly reiterates, “The more you can do.” How has that mantra influenced you?

“At Duke, I only played center. I didn’t do special teams, and I played guard for half a game my redshirt freshman year. It changed my mindset, because in my rookie year, I was on kickoff return for a little bit – so that was brand new to me. Last year, starting at right guard for 12 games, that was different but a huge learning experience for me. It really helped my career. I always tell guys who are in college and have questions that if you’re a guard, you’re going to have to play at both guard positions, and you’re going to have to be able to snap. If you play tackle, you might have to play guard. If you’re a bigger guard, you might have to kick out and play tackle. But it helps you be a better football player.”

You and your wife welcomed a baby girl, Emerson, in the offseason. How has being a father changed you?

“It’s definitely changed my whole life and perspective. Before [children], you’re able to do everything on your terms. You have your own time to do whatever you want. Having a baby completely changes that. It’s all about the baby, because you’re taking care of another life. You’re their lifeline. It’s been an amazing experience so far. I wouldn’t trade it for anything. If there’s a bad day or a bad game, her smile when I come home makes everything better.”

Have you gotten advice from any other dads on the team?

“A little bit. A lot of the guys have older kids. It’s funny telling them about my teething daughter, and they laugh because it’s like, ‘Ah, I remember those days!’ They’re great to talk to about that kind of stuff, because they’ve been through it before.”

What’s one thing that fans don’t know about you?

“I took a fly fishing class at Duke that was really cool. I love fly fishing. I learned how to tie the flies and all the different fish and insects. My dad is from Canada, so we would go ice fishing, and he would tell us about fly fishing, but always said it was too hard to try to teach us.”

Is it true you gave yourself a black eye playing lacrosse once?

“It was in fifth grade, when I was really in to lacrosse. It was before school, and we had a concrete wall above our garage. I was just bouncing the ball. With lacrosse balls, usually the second bounce is when it goes a lot a faster. So it bounced – and I wasn’t very good at lacrosse – and I just whiffed. It hit me right in the eye. I had a huge black eye right before school. I was so embarrassed.”

Atlanta assistant GM Scott Pioli began his NFL career with the Cleveland Browns in 1992 as a scouting assistant and then a pro personnel assistant. Pioli served as pro personnel coordinator for one season when the team moved to Baltimore in 1996.

Falcons tight ends coach Wade Harman coached the Ravens’ tight ends for 15 seasons (1999-2013). In addition, he spent nine of those seasons as assistant offensive line coach (1999-2007). He was the only coach to be a part of both the Super Bowl XXXV and Super Bowl XLVII championship teams.