All the stats, quotes, notes and more you need to get ready for Ravens-Chiefs in Week 14! 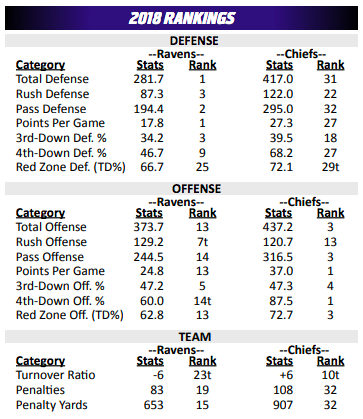 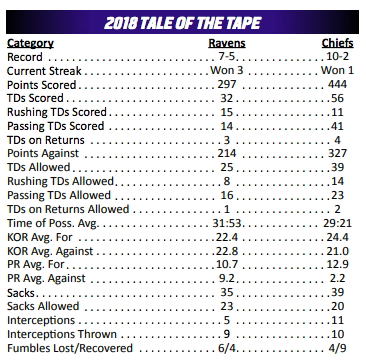 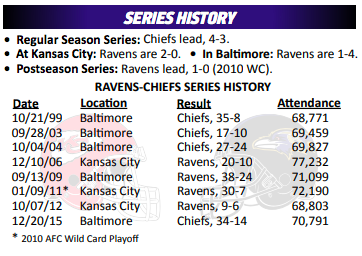 “We’ve played complementary football. The defense has played well. Special teams have been getting big plays. We were getting big plays on defense with those [two fumble recovery] scores. Defensive touchdowns are huge, and [we had] a special teams touchdown [in Week 12]. We’re clicking right now. We’ve just got to keep it going, keep our head down and keep grinding.”

“Stats speak volumes for what Martindale has done with a young and energetic “D.” In the Ravens’ three-game winning streak (all without Joe Flacco), the defense has allowed 255, 249 and 131 yards to Cincinnati, Oakland and Atlanta (and 21, 17 and 16 points). This might not quite be a Ray Lewis-led Super Bowl “D” in its brutality, but the quickness and speed of these young guys is being used wisely by Martindale.”

“He’s a unique young man. He’s very, very, very confident, yet very humble at the same time. I will tell you that Joe [Flacco] and Robert [Griffin III] have done a great job helping with some of the things. I suppose it might be difficult to understand what a rookie quarterback goes through – any quarterback. I think it’s one of the toughest positions to play and one of the most important positions to play in sports – what a quarterback goes through throughout the week and then leading up to the game, and then, certainly, in the game – so he’s done a great job of that. Joe and Robert have done a great job of prepping him for some of the things. He’s seeing a lot for the first time. A lot of things are happening for the first time, and so, they’ve done a great job of preparing him that way, along with James Urban [quarterbacks coach].”

RB Gus Edwards on his chemistry with QB Lamar Jackson on and off the field, and what a mobile QB does for him:

“He definitely takes pressure off of me. All defenses have to respect the read option. He’s not just pulling it in there for nothing. He could pull it out, and everything used he’s put on tape. He can make plays with his feet, so the defense has to respect it. Our relationship is great. On the field, he’s a motivator; he’s the leader in the huddle; he talks a lot; he’s telling us, ‘Guys, we need to score on this drive.’ He keeps us going out there. He’s a very smart football player, very talented. Off the field, he’s humble, and he’s fun to be around.”

“He’s a really good young man, and he’s a really hard worker – very, very serious-minded. And, he wants to be successful, and he’s kind of all-business. That’s how he approaches it. You get him to smile, you kind of feel good about that sometimes. It takes a really funny thing to get him to smile a little bit. I really appreciate his approach to the job.” 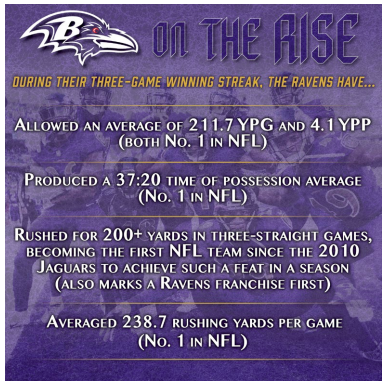 GETTING TO KNOW YOU ~ Q&A with Brandon Carr

Brandon Carr cites teammates, coaches and personal relationships for his longevity, success and focus on life balance. He specified a few special “teachers” from whom he’s learned over the years. Kansas City DBs coach

Emmitt Thomas: “Emmitt is a stellar DBs coach. I give him a big ‘thank you,’ because he was a guy in my career that gave me that extra assurance to ‘go be who you are.’ That’s coming from a Hall of Famer. First time I met him, he broke down my game to me and told me, ‘It’s OK to be who you are and not have to be this ‘Rambo,’ want-to-tackle-everybody corner or like running through walls. You are a big, long corner, so use your length, your speed, your physicality.’ I settled down with him and played some of my better ball under his coaching.”

Former Chiefs/Cowboys G Brian Waters: “Brian was a guy that even to this day, I have feelings of appreciation. I text him and say ‘thank you’ for whatever out of the blue. He was able to come to Dallas for a year or two with me, so I learned more from him there. That’s a guy that has taught me how to raise a family, how to be a professional, how to manage money, contract situations, just be a pro.”

Former Kansas City head coach Herm Edwards: “Herm Edwards was full of advice. He was a real players’ coach, and he played the game, so he understood what we’re going through in our life. He was the one who just said, ‘You just need one. One of everything, and you’ll be fine. You don’t need to get two. Go buy one chain. Go buy one car.’ And, he taught the importance of taking care of your body, because it’s a business. You are your own business, so you need to take care of yourself. Nobody is going to do it for you.”

Former Chiefs CB Travis Daniels: “Travis Daniels was a veteran defensive back who came over [to Kansas City], had a lot of information, a lot of wisdom. And, he helped me make the decision to come to Baltimore. He just kind of had a reality check with me, like, ‘Hey, you’re OK. You’re blessed. Things change, and you just have to go with the flow and still produce.’ So, he helped get me here.”

Former Dallas S Gerald Sensabaugh: “He was a guy that I learned a lot from both on and off the field. In Dallas, it’s like the real NFL offthe-field type stuff, where people know who you are, and you have [outgoing] fans around. Fans will come up to you and engage all the time, so that’s a different feel, and he helped me with that.”

Former Cowboys TE Jason Witten: “Each year, I’ve learned how to become more in-tune with my body and just listen to it, because it talks all the time. So, the yoga, I’ve always seen Jason Witten do it. This offseason, I started working with a trainer that’s pretty much like a DB guru, produces a lot of talent, elite talent in the Dallas area, and I started going to yoga with him and the crew. We were locked in.”

Baltimore head coach John Harbaugh: “He is unscripted to me. He wears his emotions on his sleeve. He does a great job of finding the balance of just keeping it real but also being that coach and delivering that message sometimes. But sometimes, he’s like, ‘Let’s just go. Let’s just go play.’ He keeps it where I’m like, ‘OK, I know you’re not just home writing stuff down.’ Everything serves its purpose, so he has a good balance. I like him. It’s a good place to play football.”

His family: “My mom drilled me about the grades, and my dad drilled me about just staying on top of [myself] as a person, as a man and an athlete. It was a good balance. Parenting, it’s a learning experience. I’ve learned something new every day. Learning how to raise my daughter … I’m trying to raise a pre-teen. My son acts like he’s a teenager already. He’s five. So, it’s a learning experience every day.”

Denise Pittman, fourth- & fifth-grade teacher: “She started reading Harry Potter, and that’s when I could really close my eyes and see the book come to life. She was my best teacher ever. She’s a catalyst to my education. She was the one who made school fun for me.”

Chiefs OLBs coach Mike Smith was a seventh-round pick of the Ravens in 2005 and spent 2005-08 on Baltimore’s roster.

Chiefs CB Kendall Fuller (Baltimore) and LB Dorian O’Daniel (Olney) prepped together at Our Lady of Good Counsel (Olney) HS. As seniors, Fuller was named Gatorade Player of the Year for the state of Maryland, and O’Daniel was awarded first-team All-State and All-Conference honors as a running back.

With BBQ, of course.