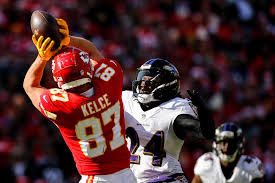 Lamar Jackson” was mostly solid until the final drive when he was strip-sacked. However, Chiefs kicker Harrison Butker bailed him out by pushing his potential game-winning field goal wide right. Jackson was 13 of 24 for 147 yards with two touchdowns for a 100.5 quarterback rating. He also managed 71 yards on 13 carries. Jackson took a hard hit in overtime and was forced to come out of the game. RGIII entered and could not move the ball the necessary 22 yards to extend the final drive and the Ravens lost 27-24.

Joe Flacco should be available this week, and there is uncertainty about the severity of Jackson’s injury. Jackson said he was okay after the game, but he is not the team doctor. So, it will be another interesting week in Owings Mills about the starter for Tampa Bay.

The Ravens managed 198 yards on 39 carries. Kenneth Dixon had one of his best games, finishing with 59 yards on eight carries with a touchdown. Gus Edwards was solid again, and had 67 yards on 16 carries. There were many doubts about the Ravens being able to keep pace with Kansas City in a ball-control offense. However, the Ravens running attack proved to be effective again.

This unit did not get many opportunities to make plays. Willie Snead IV made the most of his chances and had five receptions for 61 yards. Michael Crabtree was called for a questionable offensive pass-interference penalty. John Brown and Maxx Williams each caught touchdown passes. Ravens coach John Harbaugh admitted the Ravens need to be more explosive, but there are limitations with this new offense.

The group did a solid job run-blocking. Jackson was sacked twice and blind-sided on the fumble late in the fourth quarter. Alex Lewis was inactive with a shoulder injury, which hampered the line.  Left tackle Ronnie Stanley showed some fire and Marshal Yanda played tough. James Hurst had a costly holding penalty.

Defensive Line and Edge Rushers: B-

The Ravens allowed 94 yards on 27 carries. Chiefs running back Spencer Ware picked up several key first downs. However, Brandon Williams has been a disappointment all season and might be playing his way off the team. Michael Pierce has emerged as one of the top playmakers on defense. This group played hard in a hostile environment.

The Ravens kept Patrick Mahomes under pressure for much of the game. Terrell Suggs and Za’Darius Smith combined for a sack. However, this group began to tire near the end of the game. Suggs had a chance to recover a fumble in overtime but he could not grip the ball. This time, Butker was able to convert the game-winning field goal.

The Ravens were playing the most explosive offense in the league. However, the breakdowns in the secondary were costly and played a huge part in the loss. Safety Eric Weddle was especially poor in both coverage and tackling. The 48-yard pass from Patrick Mahomes to Tyreek Hill on a 4th and 9 was especially costly … almost inexcusable. Cornerback Marlon Humphrey had a couple of costly penalties.  Mahomes was 35 of 53 for 377 yards with two touchdowns and an interception that led to a Ravens touchdown. Chuck Clark had the Ravens first interception in seven games.

Cyrus Jones put the Ravens in position to win the game with a 55-yard return that set up a go-ahead touchdown. Justin Tucker converted a 28-yard field goal and was perfect on extra points. Sam Koch was mostly flawless.

Harbaugh had his team playing hard and the Ravens were in position to win the game. However, they fell short despite the solid effort. There are no moral victories in the NFL, hence the average grade. There were several questionable calls against the Ravens, prompting Harbaugh to tell the media to write honestly about the officials’ performance: “You guys don’t get fined for it.” The Ravens were penalized 11 times for 112 yards, compared to seven penalties for 53 yards by Kansas City.

Marty Mornhinweg called a good game until the final drive of the fourth quarter when he left Jackson susceptible to make a mistake in the pocket. Don Martindale had the defense playing at a high level. His players kept the league’s highest scoring offense to 10 points below their average. Marindale also did a good job making adjustments on Travis Kelce in the second half.  However, the secondary made too many mistakes.

Cyrus Jones has been a spark since being plucked from the New England Patriots. He appeared to put the Ravens in position to win the game before the Ravens faltered in the end.The Ravens snapped a three-game winning streak and the road to the playoffs just became more difficult … again.