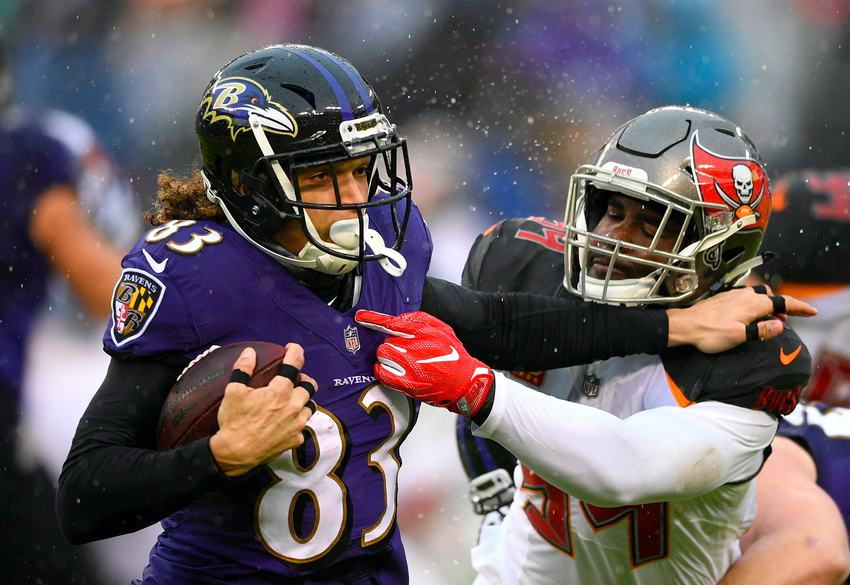 After an extended vacation, I have returned to the weekly grades. A big thank you to my colleagues at Russell Street Report for covering the weekly column for me.

This game made me think of one quote: “I’d rather win ugly than lose pretty.”

It’s hard to not find that timely after a ‘pretty loss’ to the Kansas City Chiefs last week. That being said, I think the expectations were quite high, and while I’ll take a win any day, it was still a little disappointing to not put up more points on offense.

If this was 1995, I’d be psyched right now. However, it’s not. I think the ground and pound, clock control approach is going to work against teams like the Bucs.

I am not convinced it will against playoff-caliber teams unless you’re jumping out to early leads.

The good part? We get to have some of these questions answer next week against the Chargers.

The Flacco Report has officially been retired. The rumors are swirling that the Ravens will be moving on from Flacco following the completion of the 2018 season.

Whether you like it or not, the Lamar Jackson era is upon us. All I’m thankful for is that we share a last night so that I can have a catchy grade title!

But on a serious note, Lamar is the most consistently inconsistent quarterback I have seen in quite some time.

He can go from missing Mark Andrews on a deep ball (9:49, Q2) to threading the needle in zone coverage with a completion to Willie Snead over the middle (7:48, Q2).

Ultimately, he needs to become more consistent as a passer and because of some of those throws lowered his grade, despite a respectable line of 14/23, 131 yards, 1 TD.

Lamar’s legs were invaluable today, as he set an NFL record for most consecutive games of 70+ yards rushing for a QB. You can’t argue with success as he tacked on 95 yards. That bumps the grade up, but another fumble that led to a Tampa Bay TD drops the grade to a B-, which is essentially an average performance, but got the win.

It’s hard not to love the running style of Gus Edwards. He has that old school hard running style that reminds me of many Ravens over the years. His quickness and decisive running is working well with Jackson. Gus Bus ran for 104 yards on 19 carries (5.5 avg) and a score, including a beautiful 26-yard run (2:18, Q4) that sealed the victory in the 4th quarter.

Kenneth Dixon adds a second punch of this 1-2 RB combination with a similar hard running style. He grabbed 48 yards on 11 carries.

You may not be happy with Lamar as a passer, but the way his presence in the backfield has pumped up the run game is truly impressive.

It becomes more and more difficult to judge these guys each week. They’re not making big plays, but they’re also not getting opportunities based on the run heavy approach.

An interesting argument is whether some of the “dropsies” are because of inconsistent work, inconsistently thrown balls or just poor catching technique.  To me, it’s a mixture of everything. I think they have a hard time getting into a groove, but I also see so many wasted opportunities. Today, a ball hit John Brown right in the gut before falling to ground.

Willie Snead has certainly impressed and it’s great that he’ll be around next year. He’s an ideal slot WR who can be a safety blanket. Lamar needs to develop as a passer and having guys like Snead that can make a big catch is going to go a long way in getting him comfortable as a passer.

Lamar’s presence hasn’t just helped the running backs find some space, but has also boosted the offensive line. Opposing teams’ front-sevens lose reaction time because they have to read the play more than they had to against a Flacco-led offense, and it’s helping these guys get leverage.

The guy that needs to be highlighted is Orlando Brown Jr. The rookie has emerged as a bookend for the future. He plays with more quickness than many were expecting and is a bulldozer. He combined for a double team with Marshal Yanda on Gus Edwards’ TD run that was a thing of beauty.

Pass protection was a little shaky today (a lot of Lamar scrambles that avoided sacks), but was not detrimental. Overall, a great performance for the group.

Anytime you hold a team to 12 points, you have to be awfully happy with the defense. The only thing holding back an A grade was the lack of turnovers. The Ravens have set the bar high in the last two years with some very dominant performances. This was a good one, but not a great one.

Defensive Line and Edge Rushers: B

Up and down game for this group. Payton Barber got the better of them in the 1st half, but the second half was tough sledding. Additionally, it should be noted that Brandon Williams apparently made his first play of his massive contract!

Most people know I’m not a fan of B-Will’s contract (love the player, hate the price), but credit goes where it’s due. He busted through the line on 3rd and 1 to drop Barber for -3 (7:52, 4Q) that led to a turnover on downs.

The pass rush was weak once again. A few plays flushed Winston out of the pocket., but ultimately the Ravens couldn’t take advantage and bring him down. The big one that stands out is 64-yard pass to Mike Evans on an extended play (3:15, Q2). Evans got lost in coverage, but you just have to come home on a sack opportunity like that.

The linebackers roll out much like the rest of their front seven. Another good, but not great performance.

They did a great job against Cameron Brate and provided the run support that, like that defensive line, improved in the second half.

Not much to report, which is good and bad. Good because it wasn’t detrimental, but bad because C.J. Mosley is due a big contract and I can’t remember the last time he forced a fumble or got an interception (note – that’s because it hasn’t happened once this year).

Teams will soon learn to stop throwing it at Marlon Humphrey. He is becoming a shutdown cornerback in the NFL and today he showed it. He picked off Winston (13:26, Q4) and sealed the deal with a 4th and 4 pass deflection that was intended for Chris Godwin.

These are the plays that are much-needed to seal games and ones that will be needed if this team wants to end up in the post season.

As mentioned earlier, I thought the pass rush was weak and some of the completions on the defensive back group were on extended plays.

Brandon Carr also should receive mention for having a quiet, but solid game (quiet is usually good with Carr).

Cyrus Jones’ muffed punt knocked this grade down, but overall it was a pretty average performance.

Sam Koch kicking the crap out of the ball and Justin Tucker not missing have become the expectations so it’s hard to be impressed, which is of course a good thing.

My gripes with this coaching staff have been detailed all year.

First off, I will credit them for getting a win. It’s very hard to complain when there’s success, so that’s noted.

However, this offensive approach is not going to work long term. Lamar needs to be able to drop back and pass. I thought he got more opportunities today, but the read option has to start showing a true RPO concept or defenses are going to figure it out. Additionally, the play design just seems to get too cute. Chris Moore’s -5 yard run is a great example. Just keep it simple and let Lamar throw.

Wink Martindale called a pretty solid game today. There’s not much to pick apart. The weakness of the pass rush can’t always be schemed to improve. Overall, a solid called game on defense.

Marlon Humphrey. He was a nightmare for the Bucs today and if he can do that consistently, we’re looking at the next shutdown CB in the NFL. Loved it.