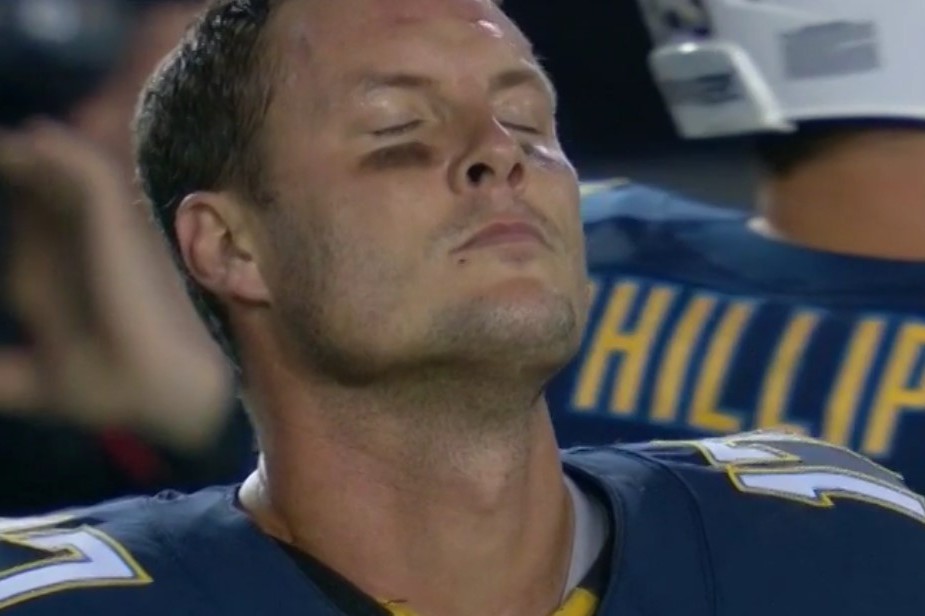 All the stats, quotes, notes, and more you need to get ready for Ravens-Chargers, in this week’s Crab Bag! 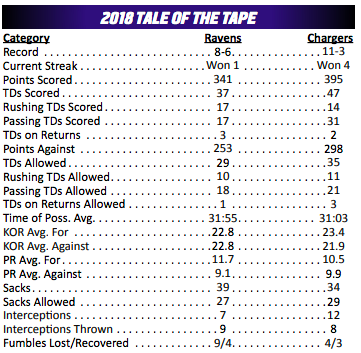 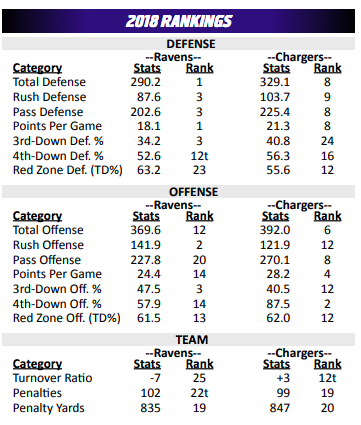 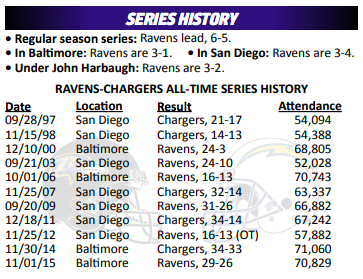 QB Lamar Jackson on if he’s able to call the Ravens “his team” at this point, now that he’s starting:

Rookie RB Gus Edwards on the combination of him and QB Lamar Jackson rushing the ball:

“I feel like Lamar [Jackson] brings a lot to the table. I feel like the offensive line was getting a great push for us and the running game got the momentum going for us. Every play felt like we just did what we needed to do. Right now, we have a good thing going. We’re trying to build on that each game and keep it working. We feel like the fourth quarter belongs to us. And we’ll run out the clock every time if we have to.”

“I’ve always envisioned us having a great team – a balanced team – offense, defense and special teams playing off of each other. We kind of got away from it. Defense didn’t play very well, offense didn’t play very well – we lost some games. We’ve gotten back to what we do best and historically what the Ravens are – running the ball, stopping the run and playing great special teams. As a team, we’re where we need to be. You prepare and fight for each other, knowing that’s the way the game is going to go. You play good football. We’re just playing together. Next week, it could be 40-to-30-something, you just never know. Everything’s right there in front of us. You just have to enjoy these moments; they don’t come often. We have another challenge ahead of us, and we’ll get right to it.”

“Our offense is amazing. We control the ball very well, and that really helps the defense. If the defense is fresh and rested in the fourth quarter, that makes all the difference in the game. Our offense is very versatile. We can run it inside and get the edge on the outside. If we keep playing like this, it’s going to be hard to stop us. … We feel like we are a dangerous team, and other teams don’t want to see us. We’re going to keep playing our Ravens Football and finish strong.”

“He’s young, and he’s an NFL-starting quarterback. That’s a lot of pressure. It can be tough when you’re young like that, and everyone’s in your ear, telling you what you should and shouldn’t do. He’s handling it well. He’s a playmaker. He can make something out of nothing. I think that’s what’s going to make him even greater as he progressively gets more snaps and more opportunities. I love Lamar. He just needs to keep doing what he’s doing.”

GETTING TO KNOW YOU ~ Q&A with Patrick Onwuasor

What are you most excited for about going back to L.A.?

“First, the weather. I’ll get to see some palm trees, see some family, just hang out and be back home.”

Which family lives in California?

Did you play basketball growing up?

“Yes, I did. I was too aggressive, so I had to play football.”

What was your role on the basketball team?

“Typically, usually, when we were going against somebody really good, my coach would put me on him, because I was the aggressive one, and I would be the one roughing him up. So, I guess that was my job.”

What’s your favorite place to eat in your hometown?

“I’d probably have to say Roscoe’s Chicken and Waffles. I get ‘Obama’s Special.’ I know it’s waffles and chicken, and I think that’s really it.”

What are your thoughts on In-N-Out?

You do a lot of community work. What have been some memorable moments that encourage you in that work?

“Just me interacting with the kids. The one I just did [Holiday Helpers] with Brandon Carr, I was just standing there, and a kid came over to me and was like, ‘I want to go with you.’ And then, right then and there, it was a bond we had. Those are things that make me want to do it. When we had an event at the facility, I was playing with a little boy. We were playing football, and he said something to me, and I’m like, ‘All right, this is going to be one of my guys, too.’ I just had those moments where I interacted with somebody and felt like that person is going to be a part of me.”

How do you let those experiences shape what you want to do in the community moving forward?

“The Chiefs’ quarterback, Patrick Mahomes. I’m still thinking about that [Week 14] game. I would love to see them in the playoffs.”

Who is the toughest player you’ve ever gone against?

“[Marshal] Yanda. In practice my rookie year, I tried to come on in the blitz; I got stoned. When I think a gap is open, I try to shoot it. He just comes out and stones me. But, I started to notice that he’s watching me the whole time. But to me, it looks like, ‘All right, that gap is open.’ So, he’s basically saying ‘It’s cheese. Just come up here.’ And then, he comes out and he gets me. So, I started to figure it out. I think that’s the reason I started paying attention to the guards, like ‘OK, this guard might be blocking down, and you think that gap is open; but, he has that gap, and that’s when he comes off and gets you.’”

What’s your advice to an undrafted rookie coming into the NFL?

You and your girlfriend, Nicole, are expecting a baby boy. What are you most excited for?

“Everything, really. Seeing my little man and just being a dad and just trying to learn the process of being a dad, and just raising him and just giving him things that I wanted that my parents couldn’t do for me, like a Christmas tree. I know I’m going to make sure that he’s going to have a Christmas tree every year.”

Chargers practice squad TE Vince Mayle played in all 16 games for Baltimore in 2017.