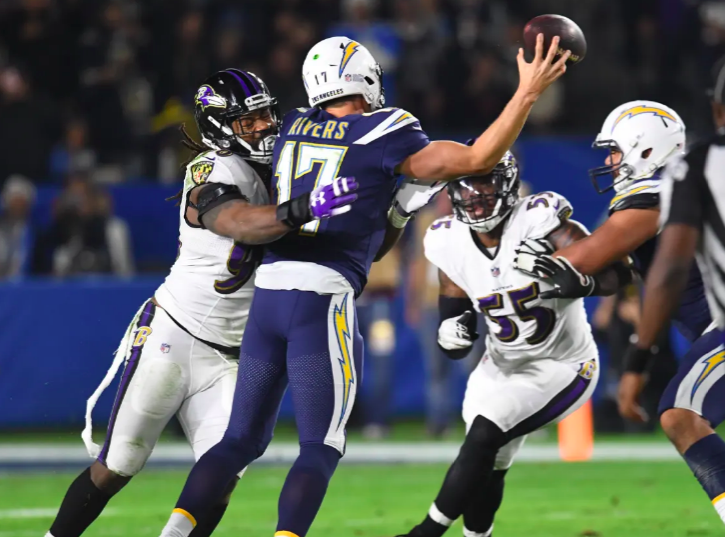 Oh man, who else was beginning to feel some déjà vu going into the Chargers’ last possession?

It was Kansas City and New Orleans all over again. The offense can’t move the ball to close out the game. The defense is left to step up the plate.

What was different tonight? The Ravens made the big play to force the turnover. Patrick Onwuasor…I see you.

My reaction to the offense tonight…meh.

The bad outweighed the good though, including the inability to end drives with points (missed FG and 4th down turnover on back-to-back drives).

As always, the Ravens left plays on the field and, while it didn’t come back to bite them, it’s going to become a problem if they clinch a playoff birth.

Lamar Jackson is a very difficult guy to grade. Some throws look so beautiful and then others look like turds. So what is being considered when the grade is given? Well, it’s important to remember that he’s a rookie and that is absolutely factored into the grade. And before this gets called an excuse, it’s not. It’s the reality.

I am going with a B- for Lamar’s passing performance of 12/22 for 204 yards 1 TD and 0 turnovers (though his fumble that he recovered stunted a drive).

Firstly, the RPO concepts on the first drive looked fantastic. We’ll take a look closer at the offensive play calling in the coaching section, but those looked great for the type of quarterback Lamar needs to become.

Second, his composure while under pressure is truly impressive. Warren Sharp pointed out a very interesting statistic tonight:

Surprise! Lamar Jackson has the #2 passer rating (121) when trailing, trailing only Patrick Mahomes.

For a rookie quarterback, that tells me he is a gamer and it’s an attribute you cannot teach. After opening the second half with a fumble that went for 7 points for the Chargers, Lamar comes back and throws his best pass as a Raven. Dropped right in a bucket.

Lastly, the things that Lamar needs to improve on are becoming very evident. For example, on 3rd and 6 (1:40, 3Q), Hayden Hurst was running a crossing route beyond the first down marker. Lamar stepped up in the pocket to make the throw and dragged his back foot putting all of his power into his arm rather than his throwing motion. The result was a ball beyond Hurst. These are the nuances that will be worked on in the offseason. It’s stuff that is fixable and that should make us all very hopeful.

Kenneth Dixon always seems to show us a flash before reminding us just why we can’t trust him. If it’s not an injury or a suspension, it’s a fumble at a crucial time. That fumble, which ended up costing seven points to open the second half, gave the grade a hit.

However, Gus Edwards continued to roll. He finished with 92 yards on 14 carries. Though losing his footing on the turf did cause him to have his first rush of the season for a loss, it’s been a darn nice breakout to see as a Raven fan.

Think about that for a second, 125 attempts this year and only 1 for a loss? That’s the type of guy you want in the backfield with Lamar.

Anyone else fed up with Michael Crabtree? Listen, I get the reasoning behind wide receivers needing to be in a groove and that this isn’t a good offense for that. However, if you’re going to publicly call out your lack of targets and get all upset on the sideline then you better make those catches when it comes your way.

Crabtree has been just awful this year in contested catches that were his bread and butter over the duration of his career.

He had two missed opportunities that were well defended, but still passes he should have come down with.

Mark Andrews is looking like a steal in the 3rd round and Hayden Hurst continues to show a few flashes here and there.

It’s no doubt the Ravens don’t get their pass catchers too involved, but it’s Crabtree that tore this grade down for his two bumbles.

This offensive line has done a true 180 since the beginning of the year. With Joe Flacco as the field general, they could pass block, but couldn’t run block.

Now it’s the opposite.

The line is getting good push with Lamar and Gus/Dixon in the backfield, but can’t pass block very well. We’re seeing Lamar get pressure and have to use his mobility to make a play way too often.

The Ravens gave up three sacks, but too many pressures are becoming a problem and a lot of that is coming from the interior offensive line.

It’s safe to say that Matt Skura and James Hurst/Bradley Bozeman/Alex Lewis will need to be upgraded.

Yup. A+ and let me explain.

As mentioned in the opening, the difference between this game and others is that the defense got the turnover to close it out.

Peanut stepped up and did what nobody could against Kansas City and New Orleans. Combine that with holding a darn good Chargers offense to just 198 yards and 10 points and you bet your bottom dollar that’s an A+ performance.

Defensive Line and Edge Rushers: B+

Someone is going to have to politely, yet firmly, ask Brandon Williams to E-Transfer some of his contract money over the Michael Pierce. When he gets those feet churning and pushing the pocket, it’s a thing of beauty. It’s something that B-Will just does not offer. Pierce was a stud tonight, even if it doesn’t show it in the stat sheet.

Additionally, the pass rush brought some noise tonight, coming home on four sacks and getting to Rivers early.

Melvin Gordon was held in check as well. Overall, a great performance from this group.

If you look back through my grade columns last year, I repeatedly expressed frustration with Peanut Onwuasor.

Well, Peanut turned that into a sandwich and shoved it right down my throat tonight. Finishing with two sacks, eight tackles and a timely forced fumble to close out the game, he turned in a beautiful performance. He has really shown some development this year and I give him nothing but props for that.

It’s been a long time since Philip Rivers went a game without a passing touchdown. 27 games to be exact.

Rivers was frustrated from the get go and the defensive back group was a big reason why.

Marlon Humphrey continued to do his thing and sealed the game with an interception after sealing last week with a pass deflection on 4th down.

Brandon Carr recovered very well on the first play of the game for the other interception.

Overall, the dangerous big-play abilities of the Chargers pass catchers was kept at bay and the DB group walked out of the stadium with some swagger. It was a thing of beauty.

That turf owes Justin Tucker an apology. It looks bad on the stat sheet to be 3/5 on field goals when you’re Justin Tucker, but a 64-yard attempt is no layup and the turf was being a wise guy so he gets some forgiveness.

Overall, not much to report on.

Let’s start with John Harbaugh. To say I was less than pleased with his extension announcement yesterday would be an understatement. I found it upsetting. Mostly because I’m not sure his style of football is working for this team. I think that was evidenced in the New Orleans and Kansas City losses. The conservative approach just has not worked.

Tonight, I think we saw some of that. However, what was the difference between tonight and those other two losses? The defense got the turnover to seal the game. So, while credit goes to the defense, the offense is still a concern and the conservative nature is hurting that.

As for Marty and the offense, there were some great things about tonight. The first drive in particular showed some RPO concepts that fans have been begging for.

When Lamar has that pass option he becomes so much more dangerous. However, I want to know why it was abandoned. It was working and then the RPO wasn’t seen much for the rest of the game. I think that’s going to be the difference between Lamar being successful or busting.

Don “Wink” Martindale called a game of beauty tonight. The Chargers have a lot of weapons and a top 10 offense. They found very little room tonight. The play calling was phenomenal.

Honest to god, who is in charge of that football field?

It was painful to watch guys slip and slide everywhere. I got up to go get another beer out of the fridge and almost sprained my own ankle after watching it. Or maybe that’s just my lack of athleticism, who knows.

Peanut Onwuasor. He was the difference between another one-point loss vs. a big win. What a performance by the young man!