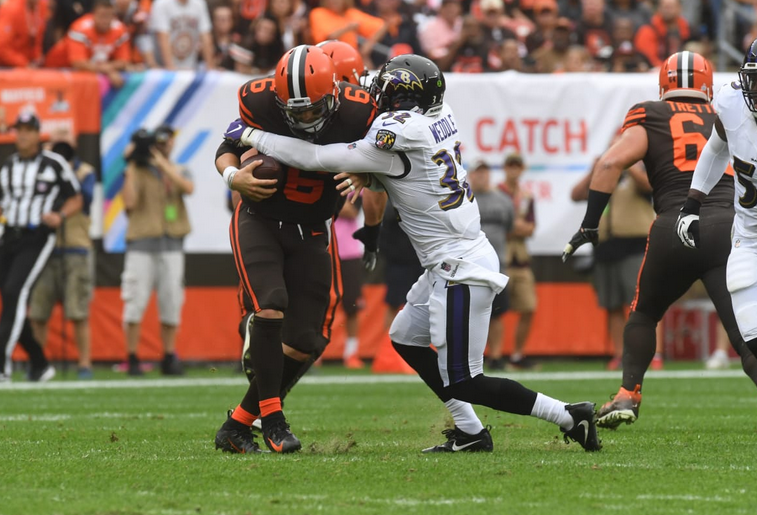 The Ravens will be AFC North champs with a win on Sunday. Will they take their first division crown since 2012? RSR Staff predict what we’ll see in Ravens-Browns here…

Cleveland’s Super Bowl Trophy case remains empty, but in the collective mind of Browns fans, the Ravens v. Browns game on Sunday is about as close as they’ve gotten to the big game since John Elway dashed their hopes in 1986, a year when “That’s What Friends Are For” topped the billboard charts. In other words, a long time ago!

Browns fans want this so bad so that they can metaphorically spit on Art Modell’s grave; grab their first winning season since 2007; sweep the hated Ravens; gain some measure of revenge for Breshad Perriman while dashing the Ravens playoff hopes. It’s a script straight out of Hollywood. The intrigue is immense. The suspense is riveting. Oh, and there’s a divisional title at stake as well.

So, how about some boldness?

— Baker Mayfield has demonstrated poise in the pocket and top-level escapability. On Sunday, he’ll be less Houdini-like. The Ravens sacked him 5 times back on October 7. This time around they’ll deliver a six-pack. One sack courtesy of Za’Darius Smith will bring back this bad memory for Mr. Mayfield. And it’s gonna hurt!

— Mayfield’s worst outing this season was against the Chargers on October 14. Then he posted a passer rating of 52.6. He won’t be quite as bad on Sunday but his passer rating will land somewhere between the 52.6 and his next worst mark of 70.7. Tavon Young got him the last time for a pick. He’ll do it again. Brandon Carr will get the other pick.

— Nick Chubb will be a bit of a problem for the Ravens. He’ll fall just shy of the 100 yard mark but Chubb’s first fumble of the season will kill a Browns drive deep in Ravens territory.

— Lamar Jackson cracks 100 yards again and throws for another 200. Favorite target Mark Andrews draws attention and that spells opportunity for Hayden Hurst who hauls in 4 passes for 60 yards and a score.

— Myles Garrett will bring trouble and he’ll get to Jackson for a strip sack that leads to one of the Browns 2 TD’s. David Njoku gets one, Chubb the other. But it won’t be enough.

— Fourth down rears its ugly head in the waning moments but this time Lady Luck falls the way of the Ravens after Perriman drops a drive-sustaining pass for a would-be first down. And THAT’S what friends are for!

— The Steelers are home for the playoffs while the Ravens are playing at home.

— The Ravens are determined to avoid a late-season collapse for the second straight year. The Browns want nothing more than to knock them out of the playoffs and finish with a winning record for the first time since 2007. As a result, expect an intense, hard-hitting game.

— The Browns won the first meeting 12-9 in overtime. However, both teams have significantly evolved since that game. The Browns have played better since Gregg Williams took over for Hue Jackson, who was fired on Oct. 29. Cleveland has won six of its last seven games. Baltimore rookie Lamar Jackson has gone 5-1 as the starting quarterback since taking over for Joe Flacco. In those six starts, Jackson has run for 466 yards, which ranks eighth overall in the NFL since Week 11.

— The Browns are ranked 29th in overall defense. The Ravens should be able to run on them and dominate time of possession, which will keep Baker Mayfield off the field. Baltimore needs to set the tone early and take Cleveland out of the game. The Ravens need to be aware of Browns defensive end Myles Garrett, who is tied for sixth in the NFL with 12.5 sacks.

— The Ravens have the league’s No. 1 defense and are tied for sixth with 43 sacks. One of the keys for Baltimore will be shutting down Browns running back Nick Chubb to make Mayfield win the game through the air. The Ravens secondary has been playing at a high level for the past few games.

— The stakes are a high for the Ravens, who have a chance to win the AFC North title for the first time since 2012 and end that three-year playoff drought. The Browns also want to head into the offseason with some momentum and make a push for the playoffs in 2019. Cleveland will have to settle for potentially better days ahead.

I watched the Browns’ last two games on GamePass last night, and I have some very amateurish observations…

First, the Broncos and Bengals are TERRIBLE. Take that 0.1% notion in your head that Cincy might do the Ravens any favors on Sunday and throw it out of your mind. 0.1% is far too high. (Of course, you only play who is on your schedule, so that’s a criticism that we Ravens fans have also heard a ton of lately).

Secondly, while Mayfield will undoubtedly terrorize the Ravens for the next decade, right now opposing defenses get their hands on a LOT of his passes, whether tips at the line or downfield. As far as the latter goes, Baker throws an incredible amount of 50/50 balls. And why wouldn’t he? Especially this coming week, the Browns have nothing to lose, so expect him to be slinging it. The Ravens need to (and will) haul in one or two of these early.

The Ravens’ biggest mistake in Week 17 last year (other than switching to zone at the last minute, of course), was letting Cincy build a lead in the first half. While Browns fans and some of their players would surely love to beat the Ravens, there are plenty of them who will also make the “business decision” to ease up as the game wears on if they are down double-digits. If it’s 14-3 good guys at halftime, plenty of Cleveland players will be mentally shining up their golf clubs coming out of the locker room.

I am pessimistic fan and observer. It hasn’t always been that way, but the last few years have made me a glass-is-half-empty kind of guy and this game absolutely terrifies me.

The Browns are motivated. They recognize their fan base wants this win. Sure, Art Modell moving his franchise to Baltimore seems like an eternity ago but many Browns fans haven’t forgotten. Baker Mayfield concerns me as well. He has nothing to lose by letting it rip in this game.

It’ll be clear early on this game will be a dogfight and will probably come down to the final possession. The Ravens just haven’t fared well in those games in recent years and I have to see it before I believe it.

The most anticipated home game that I can remember and yet another Week 17 game that the Ravens need to win to get into the playoffs. I do think they’ll win, but it’ll be much closer and come down to the wire.

There will be a game, and I hope it’s not this one, where Jackson really struggles. His running, while working now, scares the hell out of me. He’ll have to win this one through the air, in my opinion, which also scares me and is the reason I’m picking Cleveland to cover.

I feel the need to apologize to Ravens fans, as I did not expect this team to be in this position. I had the Ravens hovering around the 8-8 mark, and not making the playoffs. Now all of a sudden, we could not only win the AFC North but somehow get the second seed (is there anyone that predicted this?)

Nonetheless, this team has been incredibly fun to watch, and Lamar Jackson is the spark this city and franchise needs.

The Ravens are now the tam on everyone’s radar after physically abusing the Chargers on national T.V. We have all heard how this team is winning in ways which go against what the rest of the NFL does, and the timing couldn’t be better. The Ravens are getting hot at the right time, and are hitting opponents where it hurts. Teams that have relied heavily on their high-scoring offenses are tired, and they don’t have a defense to back them up if they stall on drives. It is not always pretty, but its working and Baltimore is now surging.

Baker Mayfield has struggled against two opponents this year, the Chargers and Texans. Both teams have excellent pass rushers, and opportunistic secondaries. The Ravens will have to figure out another creative way to pressure Mayfield like in their first game against him, as well as in the Titans game. Baker will have his fair share of big throws, but will still be around the 250-yard mark, with 1 TD and being sacked three times (very similar to the earlier matchup Week 5).

The secondary (specifically Brandon Carr and Marlon Humphrey) has played very well the last two weeks. That trend will continue, but Ravens linebackers will be beaten up by the tight end corps of Cleveland. David Njoku has improved vastly this year, and Freddie Kitchens will find a way to exploit one of Baltimore’s weaknesses on defense.

Lamar Jackson versus Gregg Williams will be a fun battle. Williams is known for his exotic, complex and heavy blitz packages. That wont work against this newfound scheme for Baltimore. The true hero of this team is Greg Roman and his influence with the running scheme, and that will always win versus the blitz. Gus Edwards, Jackson, and Kenneth Dixon will combined for 200+ yards and wear out the athletic defense of Cleveland, but they will stay strong in the red-zone and allow zero scores on the ground.

This game will come down to the wire once again. It will be tough on Ravens fans, but they will seize the day since the Browns wont be able to tie it late thanks to their atrocious kicking game.

The Ravens will stick with “The Jackson Formula” in this one.

— They will neutralize Myles Garrett with Jackson’s elusiveness.

— They will take advantage of missed tackles in level 2 for the Browns.

— Willie Snead will again be the leading receiver in terms of catches.

— This time, the Ravens hold the ball for the last 3 minutes and change, so the Browns never have a 4-down drive while within 1 score.

— The Browns will hold the Ravens to 1 sack, but the Ravens will still generate pressure.

— Michael Pierce will be effective winning 1-on-1 vs. JC Tretter (if he plays – if it’s his backup, even more so.)

— They will generate a turnover to set up a score among 3 total takeaways.

— The Ravens will rely on their corners to maintain coverage that will frustrate Mayfield and generate 4+ PDs in the secondary.

— Terrell Suggs will both draw a hold and diagnose a screen pass well.