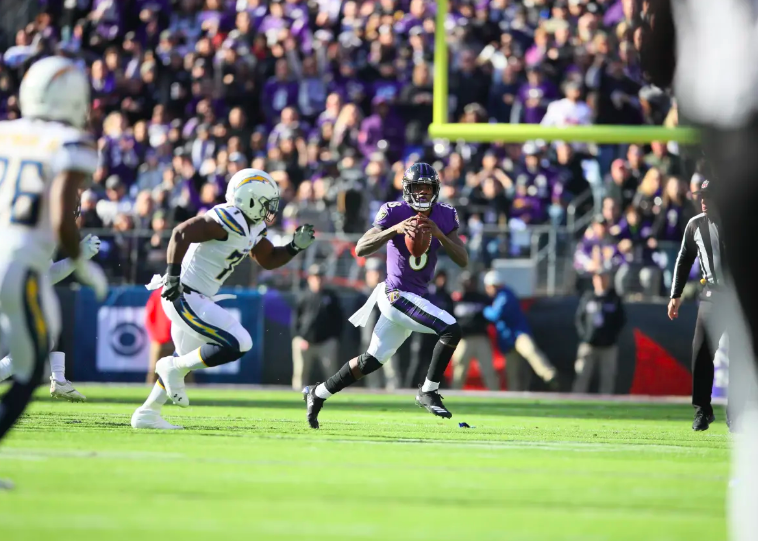 It’s natural when a loss happens that sports fans have to place blame on the responsible party. It’s just human nature and, you know what? It’s okay.

That’s what we’re going to do here today folks. We’re going to get to the bottom of who was responsible for the Ravens’ ugly performance in a 23-17 loss to the Chargers in the Wild Card round.

You failed the test offense.

Many people point out that this was a big test for the newly-formed Ravens offense. It was the first time that they would be seeing the same opponent twice. The big question was, how would they prepare? Would they adjust if the Chargers had schemed for the offense they saw in Week 16?

The answer to the second question was a big fat NO!

Yeah, that’s right. 100%. I have zero blame for the defense for the game. They did their job. The offense did not get it done and it cost the team.

In our first stop on the blame game tour, we have Lamar Jackson. Rookie quarterback playing in his first playoff game at the age of 21. Going into this season, I didn’t expect to see Lamar take any meaningful snaps. The plan looked obvious. Let Joe Flacco play, boost his trade value as much as possible, while Lamar developed and learned the offense in the background. Fate had other plans.

Lamar was not up to the test today. Two huge factors loomed over him with horrible play calling and ridiculously bad offensive line play.

However, Lamar is not blameless. He missed throws. Easy ones. His footwork stood out the most. Why? Because the offensive line was so bad that he had to scramble a lot. It is very clear that Lamar’s biggest issue is that he doesn’t have the ability to reset his feet before making a throw while scrambling. It cost him.

Going into the 4th quarter he had a net passing yardage of -2. -2! That should not happen, and CANNOT happen in a playoff game.

He gets full credit for finishing strong. The reality is that after playing so badly, he still put them within a touchdown drive of winning the game. You have to respect that and he also showed tremendous heart.

That being said, he’s 21, it was his first playoff game, and he did not get a full regular season to develop. Does he need to do a lot of work? You’re damn right he does, but when you hear him talk you know he’s going to put in the work and that is a lot to be excited about.

Bold prediction going into the game: Gus Edwards would rush for 120 yards and 2 touchdowns.

I apparently would have had better luck at winning the lottery.

Kenneth Dixon…just while I was starting to think you had turned it around and left the injuries, suspensions and bad news in the past…you go out there and you fumble the ball. 6 carries for 13 yards? Yuck.

Edwards didn’t find much else as he took the ball 8 times for 23 yards.

The reality is that the holes just weren’t there. It’s hard to blame the backs too much, but in an offense designed to pound the rock they just didn’t put in the performance to get it done. Don’t worry, I’m getting the offensive line.

Michael Crabtree and Willie Snead turned in solid performances and I think Crabtree, in particular, highlighted why he needed to be a bigger factor in the offense.

Now, you may be saying, “yeah right, he can’t catch!” You’re not wrong, but the reality is that the offense is low on firepower and with the way they struggled in the red zone, I think you have to still go to him because he’s the best chance.

Chris Moore shows flashes, but he also lays a lot of duds. He had two hands on that ball that was eventually intercepted and he just needs to make that play. He caused the grade to take a hit.

It was a quiet night for Hayden Hurst and Mark Andrews (three combined receptions on eight targets total), but it was a down night for the whole passing offense.

Pass blocking was atrocious all day. James Hurst, Ronnie Stanley and Orlando Brown Jr. looked terrible from start to finish. Hurst got beat several times in 1-on-1’s with Melvin Ingram and his play was inexcusable. Jackson ended up sacked 7 times and had pressure in his face on just about every drop back.

The most noticeable was in the first quarter, when he had Michael Crabtree streaking down the field, but as he was rolling out of the pocket he just couldn’t get himself set because he had someone right in his face. Despicable.

The run blocking was also quite bad, but this deserve a little context. Greg Roman has brilliantly implemented his power scheme that uses a lot of pulls to create mismatches and bust open holes. It had worked…until today.

The Chargers countered by using their safeties as pseudo-linebackers. The best way to beat that power scheme is either to win at the point of attack (which is very difficult), use speed to shoot the back-play holes created by the guys pulling, or shoot the other gaps.

So, while they looked bad, there was a coaching flaw there as well to consider. The lack of adjustment at half time was very disappointing. Some more straight man or zone blocking would have masked that and may have created some easy matchups in level two with a lineman climbing to those safeties. Consider it a missed opportunity.

Don “Wink” Martindale, you are excused from today’s grading. I have nothing but positive things to say to you.

John and Marty, please step into my office.

Look, it’s easy to just blame the coaching, but honestly, what in the world was that?

Here’s the scenario that played itself over and over again: Lamar Jackson would drop back. He would have pressure in his face within 3-4 seconds. Meanwhile if you look down at the routes they’re still developing. So, while we can yell that Lamar needs to get the ball out quicker, he needs someone running something shorter to get it out to!

There was absolutely zero adjustment to make up for this. The line couldn’t stop basic four-man rushes. It’s not like the Chargers were sending 6-7 guys and leaving in cover-0 the way the Browns did. They would send four-man rushes, and the defenders would just beat their man.

There was a total of ONE attempt to roll Lamar out and create some time. There was one quick slant that resulted in Chris Moore dropping the ball into Adrian Phillips’ hands.

It was just a god awful coaching performance. Now, the execution wasn’t there either, don’t get me wrong, but you just have to adjust and they did not. That falls on Marty and John Harbaugh.

You will get zero complaints from me if John Harbaugh is fired tomorrow. They did not do enough to get Lamar going and help the offensive line.

Every player on the offense should be charged to find a defensive player and take them out for a dinner of their choice.

This defense kept them in the game when they did not deserve to be hanging around. Short fields from the offense and special teams and they still held the Chargers to only one rushing touchdown that came after a very suspect ‘fumble’.

Defensive Line and Edge Rushers: B

The line did a great job of holding Melvin Gordon in check as he had a hard time, once again, finding room against a stout point of attack. The Chargers rushing attack finished with 33 carriess for 89 yards.

However, the pass rush was underwhelming again and only managed one sack. It has to be at the top of the “draft needs” list. Tim Williams was inactive again and one player that stood out for all the wrong reasons was 2017 2nd round draft choice Tyus Bowser.

While my expectations weren’t high for him, he’s just proven to be not very good. It looks like the trend of failed 2nd round picks will continue with him.

C.J. Mosley is going to get paid. His play to end the season has been very solid and he continued to be a playmaker by picking up the fumble forced by Patrick ‘Peanut’ Onwuasor. The question is, will he be paid by Baltimore?

Peanut has also been another emerging force. He was all over the field today and may be the next solid Ravens UDFA linebacker to make an impact.

His play has really added to the debate of whether they should pay Mosley or move forward with Kenny Young and Peanut with Young replacing Mosley. It’s going to be an interesting offseason.

The defensive back group was one unit I was very concerned with after the Browns game. They showed some flaws with their deep zone coverage. However, that did not materialize today.

They held Philip Rivers to just 160 yards with most of his completions being made on short routes (Maybe something the Ravens offense could have tried?).

The only flaw of the game was Marlon Humphrey showing off his ‘DB hands’ when he made a play on the ball in the second half but couldn’t reel it in.

Oh god, that was bad. Justin Tucker missed his first postseason field goal on a 50-yarder. It was just bad.

They also gave up a 72-yard kick return to Desmond King, and King also had a 33-yard punt return.

Just bad, bad all around.

Don’t get me wrong, I’m all for a guy that plays with his heart on his sleeve, but Rivers just looks like a jerk.

He complains to the refs after every play and at the first sign of a mistake by a teammate he’s hooting and hollering like a middle aged soccer mom at the supermarket who wants to speak to your manager.

I really don’t want to see Tom Brady win another playoff game, but I can’t cheer for this guy.

I have to go to Peanut for the game ball. He had seven tackles, a sack, two tackles for a loss, two QB hits and a forced fumble to turn the momentum.

Big players make plays and today, he was a big player.