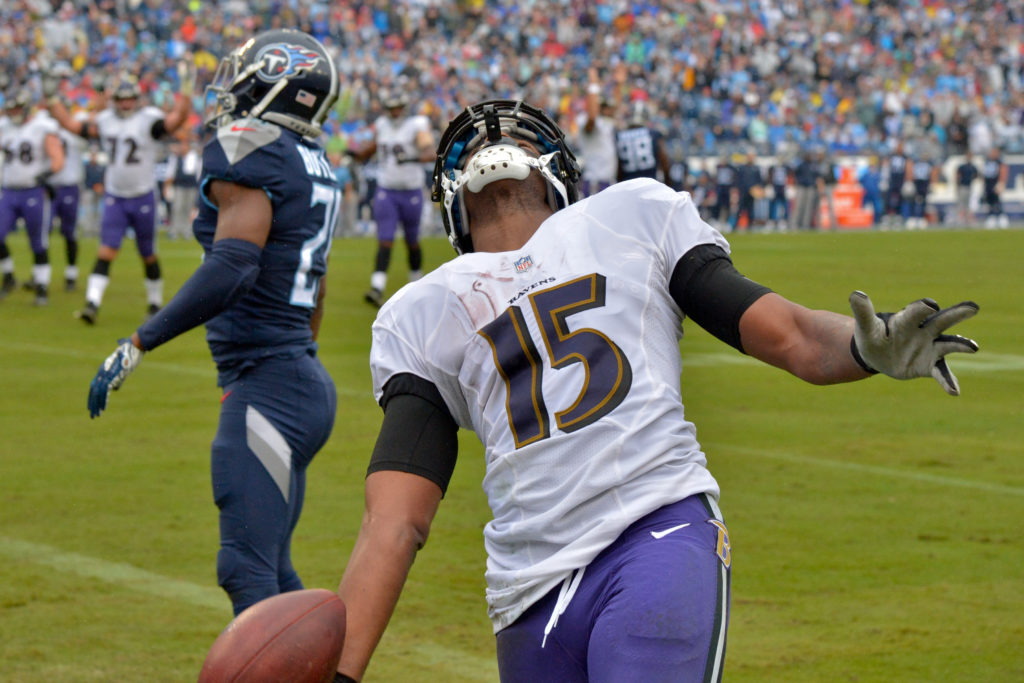 It’s about that time of year when the Baltimore Ravens start looking at their current rosters in a concerted effort to make plans for the 2019 offseason. Among those plans are free agent targets, big board formation for the NFL draft, handling of their own free agents, and of course the inevitable roster trim-downs via cuts.

Looking strictly at the latter – cutting loose the dead weight – the name Michael Crabtree continues to be the heaviest of names being circulated around Baltimore, with many suggesting he be one of the first to make his way out of town.

I gotta tell ya folks: I simply don’t see that happening.

Let’s start the conversation with the main reason fans want to move on from Crabs: DROPS.

Without question, the biggest knock on Crabtree has been, and will continue to be, his issues with drops. The slippery hands are a long-documented issue, and a completely justifiable concern, but it’s not as if it’s earth-shattering new information. Last I checked, the Ravens made an active pitch to bring Crabtree to Baltimore last offseason despite his long history of drops, and having just led the league in drops in 2017. If they weren’t an issue when they opted to sign him, why would it suddenly become one now? And yes, I understand his nine drops (according to Fox Sports) were good for third most in the NFL, but guess who first and second place went to?

The irony. It’s there.

Drops are surely an issue – I won’t dispute that – but is it the end-all be-all? Is it total justification for cutting Crabtree loose? I can’t see Atlanta fans screaming to cut Julio Jones loose (nine drops in 2018), or Pats fans doing the same with Julian Edelman (eight drops in four fewer games than Crabtree). I also can’t see Indianapolis looking at Eric Ebron‘s nine drops versus his 13 receiving touchdowns and deciding to part ways on a relatively inexpensive deal.

Which brings me to a pair of points in favor of retaining Crabtree – production versus contract.

Comparatively, Crabtree’s stat line in 2018 – 54 receptions/607 yards/3 TDs – falls right in line with this bunch, and I’m not sure how much more you should expect from this contract bracket for a veteran wideout. 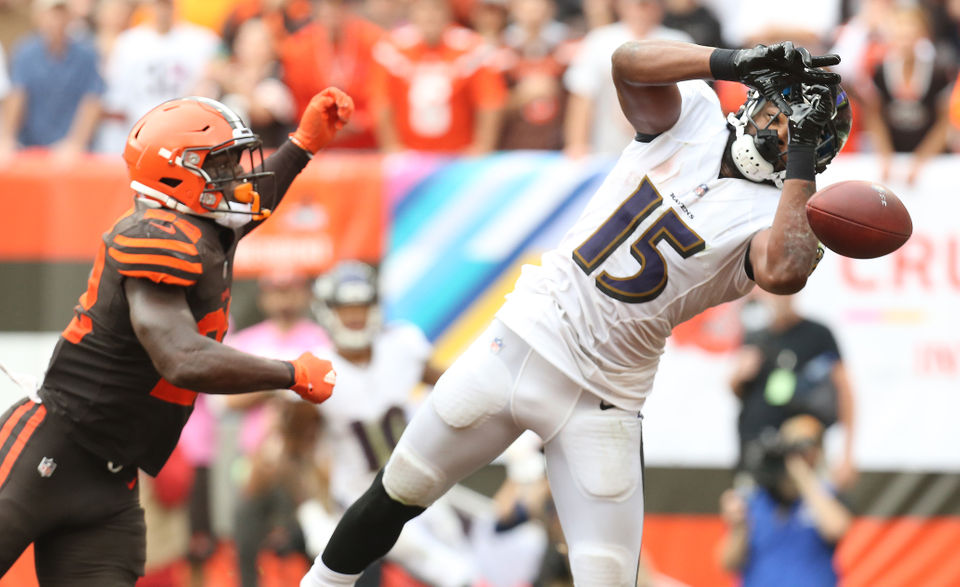 Of course his 54% catch rate is less than ideal in this group (still 9% higher than John Brown but Ravens fans want him back badly), but depending on which side of the Baltimore QB Controversy fence you reside? Just blame that on Joe Flacco or Lamar Jackson. Besides, if you put Crabtree with Matt Stafford like Marvin Jones, or Carson Wentz/Nick Foles like Agholor, I’d be willing to bet these numbers for Crabs would be a bit higher too.

Another point worth noting is production within the team. Crabtree had the second most receptions (54), third most yards (607) and second most TD receptions (three in the regular season) for Baltimore. Breaking off the time from the official Lamar Era commencement, Crabs’ 15 catches for 142 yards and three TD (including playoffs) was second most in catches and yards behind Willie Snead (20 for 193 yards), and he had two more TDs than Snead and Smoke combined. Not bad.

Assume you do cut Crabtree loose and plan to fill the void in free agency… have you looked at it? Like actually looked at the available wideouts?

Assume 3/30/20 is the starting point for those negotiations with a Cobb/Moncrief/Tate/Humphries. Now imagine there’s multiple bidders and suddenly we’re looking at 3/36/25, and if we’re being blatantly honest with ourselves, do we really think any free agent wideouts want to come play in Baltimore with a young QB who struggles with accuracy? And under a coaching staff that just this week said they’ll be committed to a run-first offense?

Should the Ravens bring Crabtree back?

In reality, the Ravens would be forced to pay a premium for a marginal improvement in free agency, and I don’t see any of these wideouts as worthy of a $4-6M increase, and that’s not including the $4.6M in dead money the Ravens would incur by cutting Crabtree.

Of course, there’s always the draft…

I don’t love it. Or should I say, I don’t love the belief that the Ravens can find either an immediate replacement of production, or anything more than a WR2 in this draft, nor do I believe they should stray from BPA and force a pick in Round 1 for a wide receiver.

Personally, I’m not seeing any sure-shot receivers this year in the draft, although I do see a few with plenty of upside in DK Metcalf, N’Keal Harry and Kelvin Harmon… but they’ll all come with risk. Metcalf has medicals that may be risky and an injury history to go with it, while Harry lacks polished route running and separation (sounds just like Crabtree!), while Harmon has some concerns with his body catching and lack of burst/quickness to create separation. I’ve also seen the name Jaylen Smith tossed around a ton because of what he did with Lamar Jackson in Louisville in 2017, but he’s at best a Day 3 receiver, and haven’t Ravens fans spent the past decade-plus griping about late wideout picks never panning out?

I’m not suggesting the entire class is bad – I do believe the top seven or eight wideouts on this board will all be viable in the NFL – but I simply don’t see any guaranteed guys, and honestly? When is the last time the Ravens drafted and developed a wide receiver successfully? Even guys we thought could be good for Baltimore have been atrocious (Breshad Perriman), and I don’t see how we can blindly trust that the franchise suddenly gets it right.

Ultimately, I see a roster that right now has five receivers: Willie Snead, Michael Crabtree, Chris Moore, Jordan Lasley, and Jaleel Scott. Lasley and Scott aren’t ready to start and replace Crabtree’s production at any capacity. Free agency isn’t filling that void without paying a premium. There’s no sure-shot draftable wideout to fill the shoes either. And ultimately, if the Ravens want Jackson to continue to grow and develop, having a few veteran wideouts on the team – especially ones with good rapport coming from the 2018 season – is what they truly need.

Expect to see Michael Crabtree back in purple and black next season.