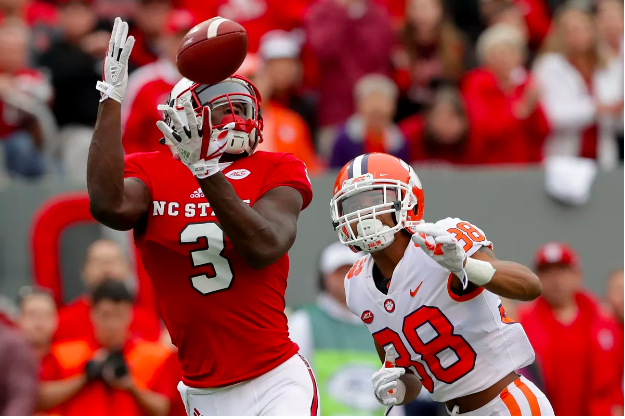 Draft season is officially here, now that Thanos Brady officially has six Infinity Sto… err.. Super Bowl rings. Every so often (honestly, as quickly as I can pump them out), I’ll be doing a quick breakdown of a prospect that would be a good fit for the Ravens, to give the fans/followers/readers a better idea of who is good at what. Hopefully it helps those who don’t watch tape, or don’t have time to do their own breakdowns. Don’t expect a full in-depth breakdown (I don’t work for The Draft Network, but if you want more information, they’re absolutely stellar), I just want to give some insight to the common man…or fan.

With that being said, my first prospect is my WR1 (for Baltimore), Kelvin Harmon, out of North Carolina State.

Everybody remembers wanting Juju Smith-Schuster, right? How about Michael Thomas? Stefon Diggs? If you wanted them, you’ll want Kelvin Harmon.

I’m not alone in this.

Before I tell you this, I want you to think about how the Ravens’ offense operated after Lamar Jackson took the reins. Are you thinking about it? Good.

Harmon is a phenomenal blocker. He wants to hit you. He takes pride in it. He sustains his blocks well, uses his hips correctly, and shows strength in his punches. You want second-level blocks? Harmon can do that. You want to open up a lane? Harmon can help with that as well. I know this isn’t the first thing that people think of when they think ‘wide receiver,’ but believe me when I say that it’s a necessary attribute for a Ravens WR.

You often hear the term ‘man among boys’ in football, and it applies here, cliche though it may be. Harmon has the strength to absolutely goon bigger corners, and like his blocking, will seek out the hit instead of shying from it. It plays well to his strengths (pun intended) when fighting for a contested catch, as well as physicality within his routes. Harmon has insanely strong hands. He can high-point the ball, snatch it away from defenders, and make catches outside of his frame, due to his large catch radius.

This is not the burner you are looking for. However, he does well with switching up his speed during route-running, and has a sneaky speed when breaking. Don’t expect him to be seen behind the secondary very much unless he’s schemed open – he’s a true X receiver, not a speedy threat.

Fluid. That’s how I would describe Harmon’s movement. A lot of receivers have a jerky playing style that can make them look shifty, but Harmon seems like a natural mover, and it helps him create separation within his routes. He has a great first step, and a decent push to get open on short and intermediate routes.

As I stated before, he will win with physicality, and can bully corners. His YAC ability has been hampered by quarterbacks that were half-a-beat behind on their passes, but he’s wiggly enough to get in some work with the ball in his hands. You may be tired of me saying he’s aggressive, or physical, but he will aggressively attack/come back to the ball to secure the catch.

Harmon was a two-year starter, and in that time, he had 150 catches for 2,203 yards, and 11 scores (again, this was with shoddy QB play). His drop rate was low – a few concentration drops in year one, where he only played 10 games and had 27 receptions – which should be comforting to fans of the Ravens, who have unfortunately become used to drops.

I’m going to clear a few things up about Kelvin Harmon.

Look, I know the interior OL is a huge need. I know that Delaware’s Nasir Adderley is a great prospect (more on him later). I know there’s talk of LSU’s Devin White falling. However, if you want Lamar Jackson to succeed, you’re going to want Kelvin Harmon. A bully-ball receiver with a large catch radius who will not only help hide Lamar’s ‘general accuracy,’ but can also knock a defender on their ass while LJ scampers for 20 yards and a first down.

Ravens fans have longed screamed for a first-round wide receiver that had tremendous upside, and Kelvin Harmon projects to be a true No. 1 ‘X’ wideout at the next level in the upcoming years.