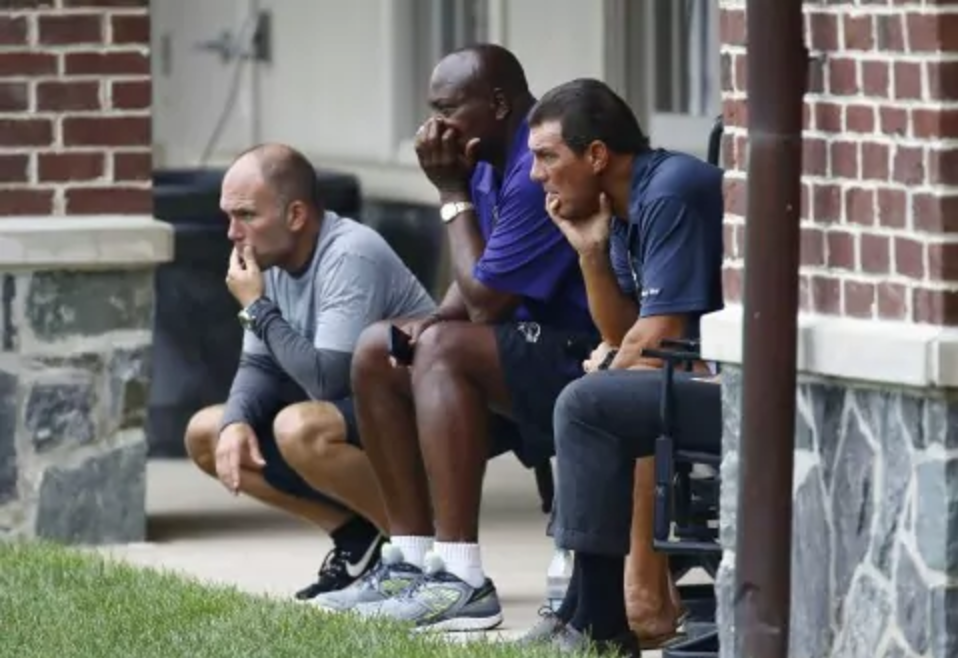 With the 2018 NFL season officially in the rearview mirror, it’s time for Ravens fans to start looking ahead to the 2019 season.

Yea, I know free agency is a ‘thing’ but I’m not focusing on that right now – and neither are you. We’re all knee deep in #DraftSZN and looking forward to the 2019 NFL draft in a few months while currently burying ourselves in mock drafts, player evaluations, etc.

Unfortunately for Baltimore fans, the Ravens are currently without a 2nd round pick, and will have a sizeable gap between their first pick (Round 1, 22nd overall) and their second pick (Round 3, 86th overall). Beyond that? They’ll receive a compensatory pick for Ryan Jensen (either last of the 3rd round, or first comp pick of the 4th round), along with their own 4th, 5th and 6th round picks, and a 6th rounder from the Tennessee Titans.

As far as holes in the roster go, the Ravens should be looking to add the following positions: RB, LG, C, WR, MLB, FS, CB…

I’ll stop there – wide receiver is the one position that stood out to you, isn’t it?

Typically it does for Ravens fans – after all, it’s the ‘sexy pick,’ and what’s that other reason again… ah, that’s right.

The Ravens cannot successfully draft and develop a wide receiver if their season depended on it!

Despite previous failure after failure, it seems the majority of the Flock continue to gravitate towards the wideout position in mock drafts and who they want at pick 22… I fail to see the justification, nor do I see it as the top need for this franchise and where they are today.

There it is folks: I don’t want a wide receiver in Round One.

BOOM goes the dynamite, and I can already see some of you gearing up your keyboard warrior hate replies…

Let me take a step back and try to make sense of it all.

Let’s start with what we already have, and look at the Ravens’ rostered wideouts as of this moment: Willie Snead, Michael Crabtree, Chris Moore, Jordan Lasley and Jaleel Scott.

I think it’s safe to say four of those five will not be moved, and I’m in the camp of keeping Crabs as well. Of these five, Snead and Crabs proved themselves as starting to establish a rapport with Lamar Jackson last year (#1 and #2 in receptions, yards and TDs, respectively, with LJ under center) and I see no reason to limit their snaps. Moore has long been undervalued, with many believing he should have seen more snaps over the past two years. Then there’s Lasley and Scott, neither of whom have seen a regular season snap, making 2019 effectively a rookie year for them both. Adding a Day 1 wideout does one of three things:

None of those situations are truly ideal for Baltimore, nor are they reflective of how the Ravens typically operate.

Let’s take things a step further and discuss the rest of the offense. It’s great to give Lamar more weapons – after all, one of the biggest knocks for Ravens fans has long been that the front office never supported Joe Flacco with weapons (sans Perriman, Smitty, Boldin…), and it should help Lamar’s growth…

But will it, actually?

This is very ‘chicken or the egg’ sort of argument here, but I think the best way to support Lamar’s growth is fixing the offensive line before adding weapons. They may be able to add a center (Mitch Morse) or a guard (Roger Saffold) in free agency, but it’s unlikely they grab both. If you use that top pick on an offensive lineman and suddenly LJ doesn’t have three guys in his lap almost instantly? Perhaps he’ll have more time to survey the field and find his open man as opposed to running for his life. This isn’t shoveling blame for pass game inefficiencies entirely in Lamar’s lap – more focused on the need to protect your first round asset in LJ, as I think the game is won in the trenches.

What position should the Ravens target in Round 1?

I’ll make an entirely erroneous and likely-to-get-panned comparison but I’ll preface and say I am not comparing these two QBs… but look at what Tom Brady has done with lesser weapons because the scheme and line play were phenomenal. Look what Nick Foles was able to do in relief of Carson Wentz. Look at Andrew Luck this past year – he had T.Y. Hilton then not a damn receiver after him.

All had great offensive line play that allowed them time to find their man, and in Lamar’s case, the added abilities being able to take off down field would make him that much more dangerous in the event nobody can get open (there’s always an open man).

The counter to this, of course, is that giving LJ better weapons is just as helpful to improving the passing game… but with pressure in his face, Lamar’s accuracy decreased last season (as would any QB at any level).

Then there’s the matter of Lamar’s accuracy concerns. I know it’s not something folks want to talk about because it tends to fall back into the Flacco vs Lamar debate, but we’re well beyond that now. Joe is all but gone. Lamar is our guy for the foreseeable future, and we must build around his game, but the current iteration of his game consists of subpar passing, and 2018 was no anomaly – in his three years at Louisville and his first year in Baltimore, Lamar Jackson has never been a >60% completion QB. Do I believe he can improve? You betcha! But I think protection is a bigger key to that improvement than a singular receiver in a draft class where the top wideout likely falls into the 20’s anyway (not reassuring!).

Why are we suddenly believing a rookie wideout helps his accuracy issues any more than the weapons he has now? And why do we believe without fixing the line that the current iteration of the front five can now hold up long enough to let routes fully develop without Jackson being forced into a rushed throw, or taking off because there’s no better options?

One last note here – the Ravens’ success rate on offensive lineman in the first round is a full 180 from their failures at wideout in the first: Jonathan Ogden (4th overall), Ben Grubbs (29th), Michael Oher (23rd- say what you want, he started four years here and earned two more contracts), Ronnie Stanley (6th). That’s it. Four picks that all went on to have successful NFL careers as starters at their respective positions. Compare that to Breshad Perriman, Mark Clayton and Travis Taylor.

I know it’s not fun to think about, nor is it the big splashy name in the draft, but I’m taking the protection for Lamar Jackson over the shiny new toy every damn time.