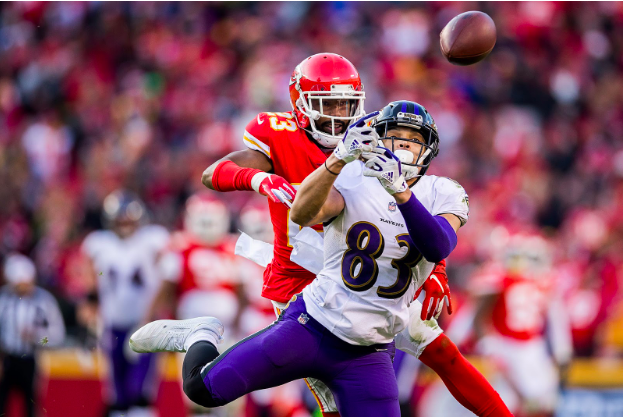 The sky is blue, water is wet, the best chicken wings are flats, and the Ravens need talent at wide receiver. We can set our watch to it at this point. Baltimore again enters an offseason with more questions than answers at the position. Should Michael Crabtree stay or go? Is there more to Chris Moore? Are Jordan Lasley and Jaleel Scott NFL receivers? The Ravens need to figure out a way to finally solve this Rubik’s cube in order to reach true contention.

March 17th is a date to keep an eye on. If Crabtree is still on the roster, he’ll be owed a 2-million-dollar bonus. Crabtree had an up and down (mostly down) first season in Baltimore. He had increasing difficulty separating from man coverage and his trademark contested-catch prowess took a hit. The Ravens could bring Crabtree back with hopes that his drop issues were an anomaly or they could use that five-day window from the start of the legal tampering window to his bonus date to shop for a replacement at a number they feel comfortable.

[Related: Why Crab WILL Be Back in Baltimore]

A potential replacement option for Crabtree could come via a John Brown contract extension. I don’t see a scenario where the team locks in financially on a mediocre group, even if just for a year. Brown started off the season on fire, a fire that fizzled once Lamar Jackson took over as starting QB. Question 1 here is would he even want to come back? The Ravens played it extremely conservative with Jackson as a passer, opting to leverage his athleticism to spearhead a potent running game. While I expect the Ravens to keep a run-heavy approach, I’d also expect them to loosen the reins a bit for Jackson which would create more opportunities for Brown.

Snead had a rock-solid first season in Baltimore. He was a tough, reliable presence in the slot who caught the ball cleanly and found soft spots in zone coverage. While his $7.2 million cap number is probably a bit on the high side for his contributions, I’d expect him back in a similar role next season unless the Ravens are able to find an expensive upgrade that requires some salary slashing.

Moore is always good for a least a few plays a season that makes you wonder what he could do with more opportunities. He enters his contract year likely in the same role he’s frequented the last couple, 4th receiver/kick returner and gunner. Most times I feel like that’s appropriate but sometimes I feel like he’s being undersold. I guess we’ll get the right answer on that at some point. Maybe.

Lasley spent his whole rookie season as a healthy scratch with no real buzz. Jordan is a solid sized vertical receiver with some intriguing natural separation ability but has had issues with drops. I think there is enough there to keep him on the WR5/WR6 radar in 2019, provided he makes the necessary jump.

Scott didn’t even make it to healthy scratch land, being placed on IR in August with a hamstring injury. By all accounts, he wasn’t doing much to separate himself in training camp and will likely wind up on that WR5/WR6 bubble as well.

The Ravens will need to get savvy and creative to escape the perpetual cycle of mediocre talent at the position. The most necessary (and daunting) avenue would be the draft. They HAVE to hit there at some point soon, almost by accident by now considering their history. This year free agency class has been scrubbed of its star power but still offers a few interesting options on the fringes.

Tyrell Williams – “The Gazelle” has #1 receiver size and ability and will be looking for the opportunity to prove that in free agency. The tricky part here is he’ll be looking to be paid like one too. Williams’ calling card is his vertical ability, but he’s also a smooth open-field accelerator. He’s never played in a higher volume role and whether he can handle that is probably one of the biggest questions in all of free agency for me. That makes a big money deal for him risky but if they hit, the upside could be well worth it.

Phillip Dorsett – Big, boundary, blocking…just a few of the buzzwords I’ve heard describe the Ravens needs at wide receiver under new OC Greg Roman. While all those things are important, maybe just as important is a field stretcher to keep safeties from creeping into the box. If John Brown’s asking price leads him elsewhere, Dorsett could be a reasonable facsimile. He didn’t get a ton of opportunities in New England but showed up when his number was called.

Dontrelle Inman – One of the biggest arguments for keeping Crabtree on the roster is the perceived risk of handing over the starting X position to an inexperienced player. If the Ravens decide to part ways with Crabtree and opted to replace him high in the draft, Inman could be a cost-effective bridge. He played very well in the 2nd half of last season for the Colts showing some separation, hands and catch-point ability.

De’Anthony Thomas – The Ravens have a need for players who can make plays in space and Thomas could really give them a boost. Whether it be via jet sweeps, screens, off tackle runs or routes out of the backfield, he can make things happen.

His freakish height-weight-speed combination gives him the highest upside of the class. He looks like Tarzan and plays like him too. Super physical route runner and box-out guy but has some open field fluidity and vertical speed. If he kills the combine to the level some expect it may be wishful thinking drafting him at 22nd overall, but if he makes it there, he could be the answer to the team’s star receiver ills.

Harmon is a day 1 starting X receiver. [See our Big Board Breakdown of Harmon here] He has really strong, consistent hands. Skilled back shoulder player who makes plays on the boundary due to great awareness. Great feel as a player has enough lateral quicks to uncover versus man coverage in the short and intermediate areas. His ceiling isn’t that of Metcalf’s, but Harmon would be a solid “double,” and we know the Ravens like those in the first round.

My personal favorite in this class. Very explosive player. Sudden, nuanced route runner who will be able to get off the line despite his size because of his quick feet. True joystick open field player who lines up all over the formation. He’s being typecast into a deep threat role but he’s shown ability at all levels of the field. I have my doubts on just how much the Ravens will evolve schematically, specifically scheming people open. “Hollywood” won’t need the help. He and Lamar could be Mahomes-Tyreek East.

Ridley is a sharp and smooth player with legitimate upside to be a great route runner. His body control is particularly impressive. He’s got good hands and has shown glimpses as a vertical player, after the catch, in the short game, and at the catch point. People will be concerned about his production, but Georgia had a lot of talent and didn’t lean on one particular player for high volume. Ridley is one of the more complete prospects in this class and has a chance to put up much bigger numbers in the NFL.

Projection: Early to mid-2nd round

His lateral movement for his size stood out from the moment I started watching. Has a quick, good-looking release. Probably the best box-out receiver in the class. He’s another guy I think will be better vertically than people think due to his ability to stack and underrated long speed. Gives great effort as a blocker as well. A very impressive prospect whom I could see being a starter very early on and growing with Lamar.

Projection: 2nd to 3rd round

Watching Johnson feels like you’re watching a pro already. He’s a clean route runner with excellent feet and feel for the position. He has really good hands, solid size and experience all across the formation. He may not have the athletic profile that excites people but time and time again we’ve seen players with his skill set get into the right situation and be very productive.

Projection: 3rd to 4th round

Zaccheaus is an explosive schemed touch player with the potential to be more. Used in a variety of roles as a playmaker at UVA that will serve him well as the NFL evolves. His change of direction and clean feet lend credence to his ability to develop into a good route runner once exposed to more of the route tree. He’s one of the real late-round sleepers in this class, regardless of position.