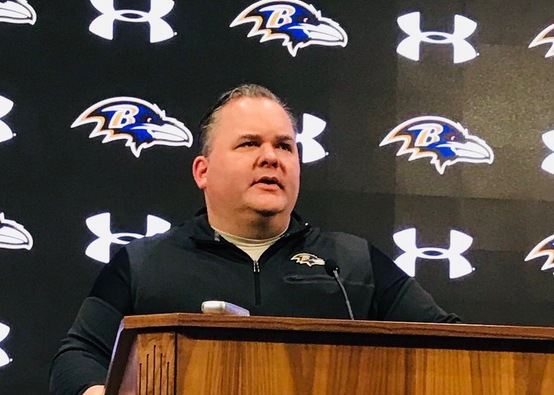 The Ravens’ new offensive coordinator believes Jackson also has intangibles that can’t be taught at quarterback.

As a result, Roman has few concerns that Jackson can take a huge step with his development and evolve into a complete player this offseason.

“Lamar Jackson is a unique, special player,” Roman said at his offseason news conference. “I think we noticed that the moment he got here on campus, and with any quarterback, there’s a curve to excel in the NFL game. And, we saw him do that this year, leading us to many victories and a playoff berth.”

Jackson effectively ran the offense when he took over the starting role for Joe Flacco, who suffered a right hip injury in Week 9.

The Ravens won six of their last seven games with Jackson as the starter and earned their first AFC North Division title since 2012. Jackson amassed 556 rushing yards over that stretch, which ranked seventh in the NFL.

The key for the young quarterback this offseason is to work on his fundamentals. After that, everything else will fall into place as far as throwing the ball, according to Roman.

Jackson, however, must do a better job holding onto the football, which is another point of emphasis.

“I think he knows, we know, and we all collectively know that we can’t do that,” Roman said about the fumbles. “That’s No. 1, and that’s going to be a big emphasis. I feel very strongly that that’s going to get taken care of without question. That is first and foremost.”

Jackson is independently putting in extensive offseason work, but Roman declined to get into specifics. He is only allowed to have minimal contact with players in the offseason, per league rules.

“I think Lamar, there’s a plan in place, and Lamar is working, and I think it’s a really good plan,” Roman said. “We feel great about it, and we’ll say ‘hi’ and whatnot, but that’s really the extent of it this time of year. So, I think before he left, there was a good plan put in place. He’s a young man[…], but he loves to win, and I think he has a great perspective on the NFL and what it takes to be successful.”

Another goal this offseason will be to provide Jackson with a few more weapons. Roman said a key focus will be improving the offensive line. The Ravens developed a power running game when Jackson took over as the starter. While Roman would like more balance, this ground attack was effective keeping the Ravens defense fresh as the offense controlled the clock.

“I definitely think the more we move into this offense with Lamar, we’ll be able to do a little bit more and present more problems for people to have to worry about,” Roman said. “I think it comes down to our plan and how that plan was executed.”

Expectations will be high for Jackson in 2019. Roman says he already has many of the core skills in place to lead the Ravens. This offseason will crucial for his development.

“He has a great feel for the game, and he can do things you can’t coach in the passing game,” Roman said. “He has really, really good field vision, and that’s something we noticed last spring. You could put a progression to a passing route, like, ‘Hey, I’m going one to two to three.’

“You could have him read the coverage and figure out where to throw it. But often times, he’ll just see guys open. He’ll see leverage take place. Not all guys are like that, so that is a great starting point.”