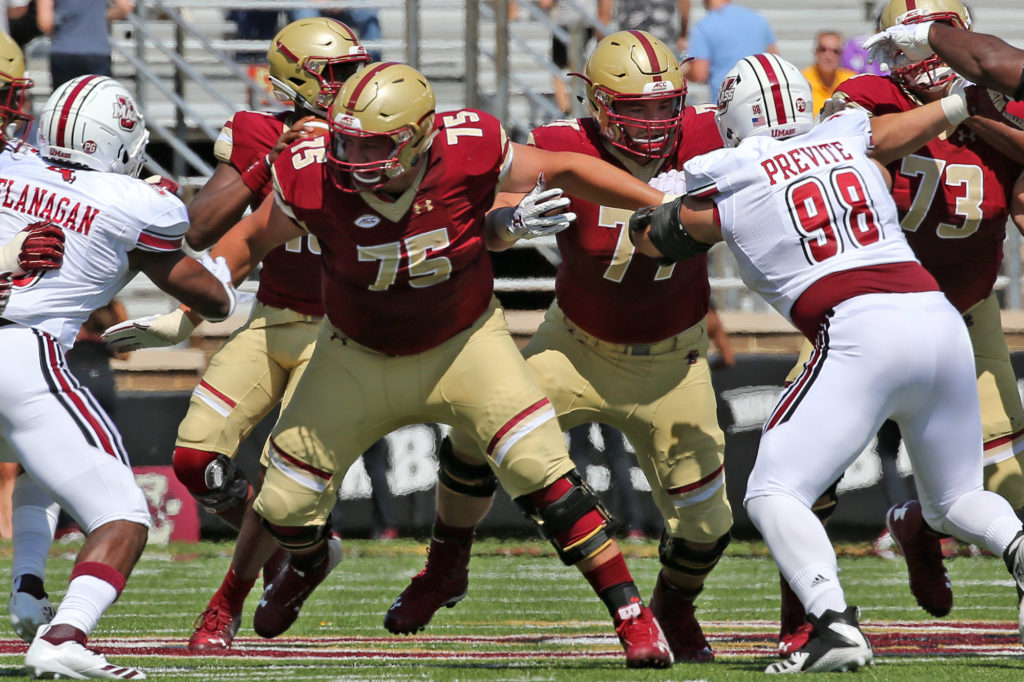 A look at another potential target for the Ravens in the upcoming NFL Draft.

— Scouting Report: Lindstrom has been a mover and shaker on Boston College’s offensive line. He moved back and forward between right guard and right tackle over his four seasons at the ACC school. Lindstrom projects as an OG in the NFL, but does provide some flexibility to be kicked out to RT in a pinch.

The big standout from watching Lindstrom is his versatility. He has enough strength and drive to win 1-on-1 drive blocks, but also has the athleticism to get out in space. The next thing you will notice is how he fires off the ball. His explosiveness, paired with great technique (low out of his stance with good posture) projects very well in a scheme like Greg Roman’s that will use a variety of powers and traps. He is unbelievably consistent in his run blocking. He may not maul his guy, but he wins the block on a very high percentage of plays using strong technique and a good understanding of steering his guy to open a hole.

BC was a run heavy offense and when they did pass there was a lot of play-action, so it isn’t the easiest trait to evaluate. However, from what can be seen, Lindstrom has a solid anchor and, again, very good technique to absorb his man. He has good posture and uses his feet to maintain his balance. Solid combination of athleticism to mirror in pass protection and strength to withstand bull rushes. On the inside, he should be able to handle most iDL pass rushers.

His strength progression from his 2017 tape to his 2018 tape was very noticeable. In 2018 he was rarely beat in 1-on-1 situations. It appears he got a lot stronger in that offseason and paired that with his strong technique. While he gets good push in the run game, it is mostly from his explosiveness off the block, paired with that technique to engage his assignment early. He does look to drive his guy, but he maintains his technique through the block. Wouldn’t classify Lindstrom as a mauler.

Lindstrom isn’t a very long player, but he appears to understand this and focuses on his strike placement to mask his lack of length. Much like his power, he uses quick hands and quick feet to his advantage. For example, if his hands are knocked in a pass rep, he fires his hands back to maintain his control.

Feet are very quick in both the run and pass game and shows a good understanding of maintaining his base through the rep.

Lindstrom is a true student of the game. His technique speaks volumes to this trait. Pre-snap he reads the defense well and post-snap he reacts well to different looks from the front 7. During the senior bowl he showed a great understanding of where the ball was going. For example, he would seal his defender away from the play to win the block.

Lindstrom would be an ideal LG in Baltimore’s scheme. His explosiveness and quick feet will make him a +puller in Roman’s power runs and he possesses the anchor in the pass game to hold his own. He would be an absolute upgrade and could be an ideal trade back target.

Lindstrom is one of the most consistent prospects at their position in this draft. He has a very high floor and should be an immediate starter who can provide solid play in any scheme. He will need to continue developing his strength to get to a high ceiling, but I don’t think it’s a reach to predict that.

If you want a day one starter who can come in and start 16 games a year for many years, Lindstrom is your guy.