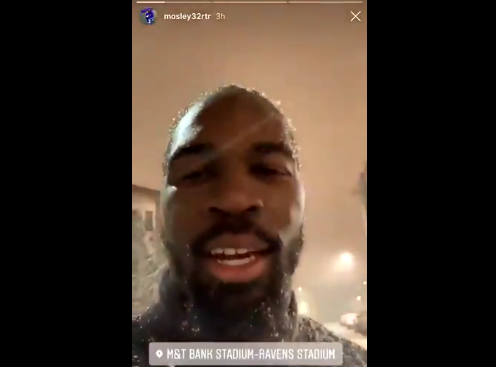 It was there on Instagram in the middle of the night…

I’m not really sure what to make of this but I think CJ Mosley wants to stay in Baltimore? pic.twitter.com/9mStgJC0QX

Then it was gone.

Unfortunately for C.J. Mosley, dirty deleting videos in 2019 does no good since people can record from their phones and it’s’ officially on the interwebs forever.

I’m going to treat this like an All-22 (as in all 22 of his teeth are up close and personal at the end of the video), and breakdown the tape.

“So… ya wanna know how much I love Baltimore, right? (audible laughter in the background) This is bullsh*t… don’t franchise me, sign me. See what happens… I’m in this motherf***er still! I’m not in Alabama, I’m not in… Atlanta, or LA, or Florida… I’m in this b*tch. Snow snow. But I ain’t loyal… alright, bet. Try me…. Try me… (whispers) try me.”

A few things to take away here.

First and foremost, there’s a joke in here somewhere about the symbolic snowflakes falling around a player up in his feels posting a video about contract negotiations on social media…

Going back to the video, I think it’s pretty obvious that this is a drunken Instagram video, and I’d go as far as betting that this was following an evening in Fed Hill (when everybody in Baltimore says “oh yea, I see C.J. in Fed Hill all the time!” I’m willing to play the odds). Some might say the booze angle is enough to take his words with a grain of salt, but as far as I’m concerned? A little liquid truth serum gets the words out we wouldn’t otherwise hear.

I’d say the main ‘theme’ of this video seems to be questioning loyalty, as Mosley asks “you know how much I love Baltimore?” and ends with “But I ain’t loyal” (in a sarcastic manner).

I have to ask… who the hell is questioning C.J.’s loyalty to this team or city? Has he been misconstruing recent ‘Manny’ comments as ‘Mosley’ comments on social media?

By my count, the questions about C.J.’s pass coverage have always been the top criticism, followed by how much money he’ll demand in free agency in contrast to what Baltimore should be willing to pay , and rounding out the top-three criticisms of Mosley is his not being a 3-down player.

His hairline is a close #4 on this list, but I don’t think I’ve ever heard anybody question his loyalty…

Could it be that the front office questions his loyalty?

The other standout phrase in the drunken ramblings- “Don’t franchise me, sign me!”

I don’t think this is C.J. suggesting that the tag has been discussed at all between the Ravens brass and Mosley’s camp; however, I think Mosley overheard or saw on the Twitters that Eric DeCosta mentioned the franchise tag in regards to Mosley’s name and scoffed at the idea of it.

DeCosta didn’t completely dismiss using franchise tag on C.J. Mosley. But he made it clear that team would like to avoid doing it.

Not a good look!

And one more noteworthy item here: did you catch the places he mentioned? Yes, Alabama is home for C.J., but Atlanta? Los Angeles? Florida? Are these potential suitors that he is indirectly saying “hey, I could be scoping out the scene in these cities but I’m not!” or did he just pick places based on warmth over cold?

Because I gotta tell ya, Atlanta would not have crossed my mind as an offseason getaway destination.

And yet..despite everything…what Mosley says in this video rings true with the sentiment we’ve been hearing for some time now:

C.J. wants to be in Baltimore.

Now, whether or not you believe the fact that he’s still in Baltimore during a dusting of snow (literally an overnight inch of snow at best) is telling of how much he wants to be here can be debated. After all, I think it’s safe to say after five seasons in Baltimore, Mosley had a permanent residence somewhere nearby, right? And I can’t imagine 52 other Ravens have ditched Baltimore since January and won’t be back until OTAs, but again, his insistence that he loves Baltimore is telling, and assuming all things (money) are equal? It appears he wants to be a Raven for the long haul.