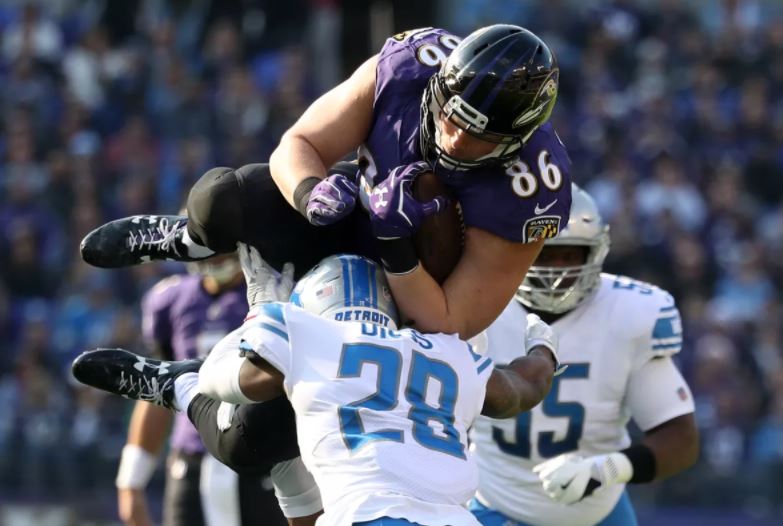 On Wednesday night, the Ravens announced a Thursday press conference (11 AM) to talk about re-signing a player. Turns out, that player is to be tight end Nick Boyle.

The #Ravens and TE Nick Boyle agreed to terms on a 3-year extension worth $18M, source said. He gets $10M in guarantees. The former fifth round pick sticks in Baltimore with a nice payday.

— The Ravens get solid value signing Boyle to a reported three-year, $18 million deal. There were some reports that at least 10 teams might have targeted him because he is regarded as one the best blocking tight ends in the league.

— The move also shows the Ravens want to keep their key players on the roster. The team also signed Tavon Young to an extension earlier this year.

— Fellow tight end Maxx Williams will likely be allowed to hit the free-agent market. This means the Ravens are still in the market for a tight end and might target safety Tyrann Mathieu in free agency.

— The Ravens now must decide if they will keep Pro-Bowl linebacker C.J. Mosley, who appears ready to get a better gauge of his value in the free-agent market.

— Next up, possible extensions for Michael Pierce or Matthew Judon.

This might not be a flashy signing like a Mosley or Za’Darius Smith but it is a rather important signing. With Greg Roman as the OC and in a Lamar Jackson-led offense, having a solid blocking tight end like Boyle is essential. It’s reported that it’s 18 million which might seem a little high but, I think it’s reasonable.

I also like the three-year deal which doesn’t make for a lot of dead money as in a five-year back-loaded contract. If it came down to landing Maxx Williams or Nick Boyle they made the right decision. Another great job by Eric DeCosta.

Boyle was rumored to be getting a ton of interest leading up to free agency, so much do that I thought he’d walk, but the two sides were able to find common ground before he it the market. Boyle is not just a good blocking TE, he’s a dominant one. At times he looks like another tackle out there.

Six mill per is a little on the high side, but the market is the market. With two other guys on rookie scale contracts at TE for the life of their deals, this number is more than manageable.

3/$18M? WOW. That’s a LOT for a blocking TE. Curious to see the numbers, hoping it is a fictitious contract, with incentives and little cap hit. But I guess you can pay him that since the other two TEs are on rookie deals, making peanuts basically. Obviously, with the way this offense is being constructed, a blocking TE is huge in Roman’s system.

Also a ton of money for a guy who has been suspended TWICE for PED’s. Kind of a risk from that standpoint, but the Ravens and DeCosta must feel confident that is in the past. But giving what EDC has done so far this offseason (all of which I am on board with), I won’t start to question his outlook now.

On the field, I like Nick Boyle at 3 years for $18M.  He’s a fine blocker who can play in line or line up in the backfield and his importance to the run game is evident from the TE snap counts for Lamar Jackson’s 8 starts:

Boyle caught 9 passes for just 77 yards with Jackson at QB, but unlike most of the other receivers, he caught a higher percentage of his targets (9 of 10) during Jackson’s starts than during Flacco’s (14 of 27).

Given Boyle’s suspension history, structure of the deal is a significant concern.  I hope the Ravens have protected the investment with deferred guaranteed money (roster bonuses) that allows for a reasonably-priced contract exit, but his market as a player would have dictated if this was possible.

The big winner in this deal may have been Maxx Williams.  Given the investment in Boyle, I don’t think it’s likely Maxx will be re-signed, but he moves up a spot among options for all of Boyle’s suitors as a TE who can both block and catch.

more knee-jerk reactions as they roll in…