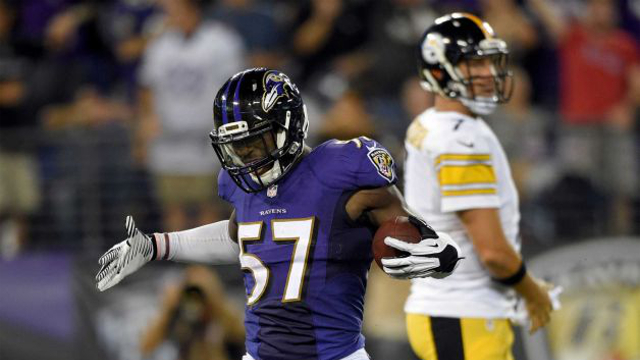 Another Ravens linebacker who wears number 57 is headed to the New York Jets.

— The Jets made Mosley an offer he couldn’t refuse — five years, $85 million with $51 million guaranteed. That is the most money for an inside linebacker in the league. The Jets’ offer was well out of the Ravens’ price range. They just shedded $18 million by trading Joe Flacco and were not going to invest $17 million in a linebacker.

— While Mosley had some detractors, the Ravens are going to sorely miss his production. He made four Pro Bowls in five years.

— Mosley was also the leader of the Baltimore defense and kept that unit organized, relaying plays. He also registered 100 tackles in four of five seasons. Mosley had 92 tackles in 2016 despite missing two games. In short, he will be difficult to replace.

— The Ravens are looking at a rebuild on defense with Terrell Suggs, Eric Weddle and Mosley out the door and Za’Darius Smith and Brent Urban likely about to follow them.

A very good player & no doubt a key cog for the Ravens for his ability to make the calls, but I pretty much agree with Jon Ledyard’s assessment below. Hard to see so much talent leave the Castle but you can’t pay someone this much & expect to fix other holes elsewhere. Mosley is not that type of difference-maker.

He’s really not that great. He’s a solid player but zero chance I’m paying a LB this unathletic that kind of money. Too many limitations. He’ll help New York, but not at this expectation level https://t.co/FcXDsUcVia

Eric DeCosta said recently that he wanted to be more responsible with the salary cap and keep young talent. Sometimes you have to choose one or the other. C.J Mosley is a talented player, just not worth $17 million a year in my opinion. I’d rather have the money invested into pass rushers and the secondary on the defensive side of the ball. In today’s passing NFL Mosley is not the ideal linebacker to make the highest paid player on defense. He may have been the signal caller but he was far from the primary playmaker of the defense.

While he made a spectacular play to seal the Ravens’ playoff birth he was also a liability in coverage most of the time due to his lack of speed. DeCosta is continuing to make decisions that I agree with 100% so far.

The Ravens are doing something they should have done five years ago. They aren’t restructuring deals, patching holes with 30-year-old-plus free agents and aren’t overpaying for free agents, regardless of whether or not it’s homegrown talent. C.J. is a good player, not a great one, and he’s being paid like an elite one.

I’m in the minority but l love what EDC is doing (and more importantly not doing) so far in free agency. Let the purge continue. It’s not about only next year; it’s about building a solid foundation for the future.

Good for C.J. for cashing in. But it was even a better move for the Ravens not to pay that kind of price. As it has been said numerous times, this is a passing league and Mosley just can’t cover.

Mosley was a good, not a great player who made most of his tackles well past the line of scrimmage.

This is clearly another move that puts DeCosta’s stamp on this team. He would not give in and overpay just to keep a player because he was a first-round pick, like Ozzie would have done. Another move I think DeCosta got right. I was also in favor of this move because I like what I saw from Peanut and Kenny Young last year. Both are way cheaper options and Young is much better in coverage.

Now having lost four starters and with Za’darius Smith all but gone, I will be curious to see what moves the Ravens make over the next few days in free agency.

This is why DeCosta has said he wants to sign the Ravens young talent before they reach free agency (and started to do so w/ Tavon Young). The numbers just get crazier every year. Last year, the Ravens probably could have signed C.J. for $11-12M. Some would have said that was too much at the time, but that would look like a bargain now.

This one hurts in terms of on-field value and the loss of a young player, but I can’t fault either side given the reported AAV of the contract.

For the record, the knock on Mosley’s coverage skills is complete BS.  Mosley has often been forced into coverage roles the last 2 seasons which have been 1) necessitated by worse coverage skills by the player next to him, and 2) exploited by opponents who target C.J. as having the weakest man cover skills in a very strong dime unit.

This release means the Ravens need a signal caller.  As of right now, the odds-on favorite is Tony Jefferson, who is the only every-down defender the Ravens have.  One of the big questions will be how DeCosta addresses this gaping hole at ILB.  Ideally, I think they’ll need to find a stopgap MLB who can play either 2 downs (with reliance on a quarter defense) or 3 (so he can call signals).  I don’t believe either of the 2 WLB alternatives are ready for an every-down role and to spread their snaps into the Mike would degrade their platoon production significantly.  As of this moment, I’d like to see Levine and Clark on the inside to play quarter on obvious passing downs.

The purge of 2002 was of similar scope, including the loss of Siragusa, Adams, Burnett, Woodson, and Starks, but it also created opportunity for Anthony Weaver, Kelly Gregg, Ed Reed, Ma’ake Kemoeatu, Gary Baxter, Bart Scott, and Adalius Thomas.  This will likely be a painful season of defensive growth in Baltimore, but there will be another set of good young players getting more playing time.

Insane amount of money for a non-pass rushing front-7 player. Good for C.J. getting life-changing money but it’s for the best that the Ravens didn’t match this deal. Already saddled with Brandon Williams’ deal the next 2 seasons, this would have been a lot of cap allocated to non-special defenders who don’t contribute enough versus the pass.

The trio of Peanut Onwuasor, Kenny Young and Bam Bradley will be given their opportunity to ascend. I also think they’ll add a veteran as insurance.