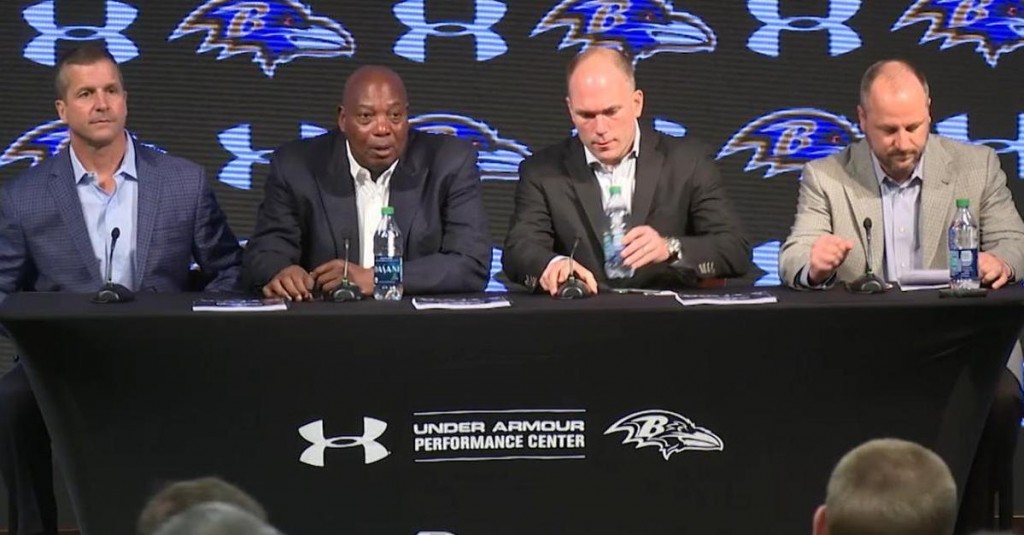 The press conference carries that dubious title because the Ravens are obviously not going to unveil their plans for the upcoming NFL Draft. The more skeptical reporters imply the team actually uses the setting as subterfuge for the opposition.

In one instance, DeCosta will say the Ravens could look to move down in the draft to acquire more selections.

Moments later, he might say the team would consider moving up to take a playmaker high on their draft board.

DeCosta has learned from the master — former GM Ozzie Newsome.

“You might be surprised at who we pick at 16 this year – if we pick at 16,” Newsome said at last year’s press conference.

The Ravens, however, will keep their cards close to their chest until the actual draft begins on Thursday, April 25.

Over the past several years, DeCosta and Newsome have been asked about the team’s inability to draft a playmaking wide receiver. That topic will surely arise again even though DeCosta already addressed that issue in his introductory press conference.

The Ravens selected two wide receivers — Jaleel Scott (fourth round)  and Jordan Lasley (fifth round) — last year, but neither player made an impact.

“That’s a challenging position, I think, to draft and to scout and to develop for a lot of reasons,” DeCosta said. “But in the end, I’ve learned from Ozzie that the guy has to catch the football – first and foremost. You’d like the guy to have some toughness and some speed, some route ability, there’s a lot of different things you look for.

“Now, for instance, blocking as a wide receiver for us is important. It’s really important. Again, we’ll hash these guys out in the draft meetings and free agency and try to find the guys that fit us best, fit our identity that we like, our skillset – again, working under the structure of the salary cap.”

Sometimes, there are some premonitions that work out.

Last year, the Ravens were asked about possibly selecting Lamar Jackson, and Hortiz lauded the playmaking quarterback, whom the team eventually selected with the 32nd overall pick.

“Lamar, obviously, set the college landscape on fire his freshman year,” Hortiz said. “He’s just a dynamic athlete, unbelievable speed when he gets out in the open as a runner, but he’s got a really strong arm, with the ability to drive the ball into tight windows.”

Jackson is now viewed as the team’s franchise quarterback after taking over the starting job this past season.

The 2018 draft was the swan song for Newsome.

This year’s event is the first for DeCosta as the full-time GM.

There’s perfect symmetry for the Ravens to grab some players that can help the long-term health of the franchise.

But only the front office knows how they will carry out that plan.