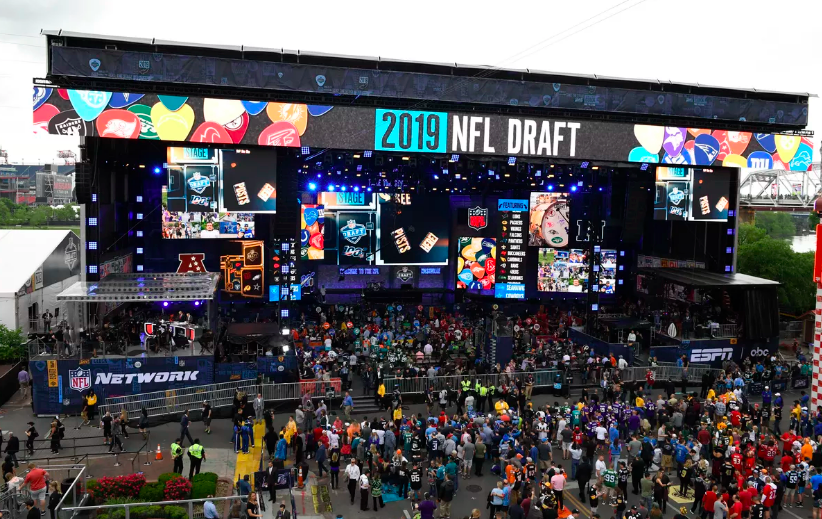 In the first round of the 2019 NFL Draft, the Ravens selected Marquise “Don’t Call Me Hollywood” Brown, WR from Oklahoma. Read our knee-jerk reactions to that pick here.

How will Eric DeCosta follow up that selection as the draft goes on? Read on for our predictions for the rest of the 2019 draft…

Many think that the Ravens will move back into the second round. But such a move is costly. For example, using the chart below, if the Ravens wanted to move to the middle of the second (Mia @ 48), it would cost them picks 85, 102, 113, 123 and 127. That’s not happening. The Ravens will sit back and wait for the draft to come to them. 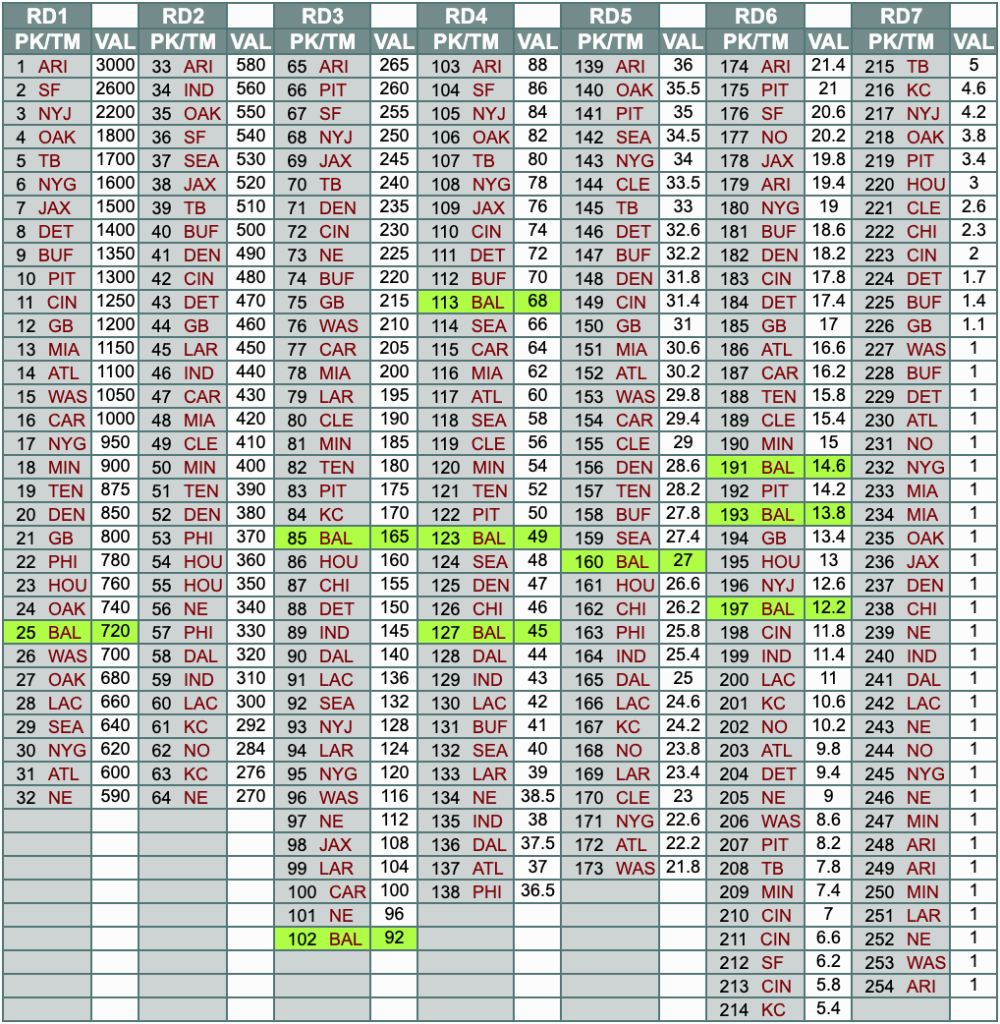 The Ravens spent 55% of their total draft capital on Marquise Brown, so they won’t be moving up before round 3 or 4 and even then probably just a few spots.

The rest of this draft will about being patient, identifying value where others miss it, and perhaps manufacturing another pick or 2 by trading down. Their 9 remaining picks are neither too many nor too few given the current holes on the roster, but the value of the remaining selections is quite low. The best thing I can say is that I trust DeCosta to find small-school value (and value in general) with picks in the 6th round. Overdrafting a player in R6 has minimal cost and provides a realistic alternative to risking a UDFA signing.

WR: 7 (Now that’s bad when you still have a big need at WR after using your 1st round pick there)

OT: 2 (Need a reliable swingman who can play RT—Ford was ideal for this role, but won’t be available when the Ravens next pick)

DT/NT: 4 (Cheap replacement for Williams would be a viable move)

DE: 4 (Urban remains unsigned, Sieler is on the roster)

CB: 4 (despite depth, the Ravens are old at CB and it makes sense to keep grooming young players)

S: 4 (like CB, the Ravens are good and fairly deep, but very old at S)

The Ravens added some ammunition in the form of draft picks by trading back from 22 to 25 in round one; however, I don’t see them using it to move into round two. My “bold” prediction is the ravens will trade back from their first third-round pick in an effort to add another pick or two. They will still pick twice in day two, while adding another 5th. Saturday will end up being a busy day.

Ultimately, the Ravens will add an edge rusher, an interior OL and another receiver with all these picks they acquire.

Plenty of really good players are still on the draft board that could have been first-round picks. Sadly it would be too costly to move up (see above) and there’s still so much value in the third and fourth rounds. It’s best DeCosta stays patient and loads up there. I expect an interior offensive lineman tonight and possibly a pass rusher. Depending on how far the next crop of receivers fall another one could also be selected tonight. Trayveon Williams is the running back I’m hoping for in the 3rd or 4th round. I’m very happy about the Ravens having 10 total picks now.

Eric DeCosta is on fire this offseason. I expect more brilliance the rest of this draft.

Baltimore added two more picks, which are extremely valuable in this year’s draft. So much first-round talent fell, such as guys like Will Grier, Greedy Williams, Byron Murphy, and Dalton Risner. Those players will push other talent further down the board, and Baltimore will be in prime position to snag it.

I expect DeCosta to trade one of his thirds and a fourth to move back into the second if Chase Winovich continues to fall. He has been a fan favorite, and his value might never be higher considering his teammate was selected earlier then anticipated.

Other guys I would move up for include Te’Von Coney or Juan Thornhill.

If Baltimore doesn’t want to move, I anticipate players like Jaylon Ferguson, JJ Arcega-Whiteside and Ben Burr-Kiver to fall and provide tremendous value for the round.

Day 2 will be a day for Baltimore to load up on pass rushers, take a falling wideout, and/or add an impact offensive lineman, all of which will be welcomed additions.

Even with the Ravens using their first-round pick on a WR,it doesn’t end there. With two picks tonight, the first one is another WR pick. JJ Arcega-Whiteside, Andy Isabella and Miles Boykin are names to keep an eye on. With the second pick O-line is an option. Connor McGovern is a plug and play guy who should be there when the Ravens are on the clock. But if you want a bold prediction, they use a pick tonight on a RB. Miles Sanders has blazing speed and would fit this offense perfectly. Devin Singletary is another name to keep an eye on.

As for Day 3, the Ravens package their 5th rounder and a 6th rounder to gain a fourth 4th-round selection. Those picks  are used on an: edge rusher, O-line , CB and MLB. That would leave them with 2 6th rounders, in which they close the draft with another WR selection (Jazz Ferguson?) and a DT.

So the Ravens ended up going with a wideout in the first round, falling in line with what GM Eric DeCosta said about taking more chances at that position.

Now, there are still plenty of needs to attempt and fill in the later rounds, like edge rusher and offensive line, and with receiving the extra draft capital by trading back yesterday, they have more of a chance to hit.

The team is still without a second-round pick, though some have speculated that they could make their way back into it if the situation presented itself.

For day two, I’d love to see the Ravens move up in the second round to nab Delaware safety Nasir Adderley, and take Old Dominion edge rusher Oshane Ximines in the third.

I’m not keen on moving into round 2 necessarily, but three recent trades from the middle of round 3 into the back end of round 2 show that it would likely cost the Ravens round 3 (85 overall) and round 4 (113 overall). Maybe throw in a 6th, but the delta from the original draft class would be a wash since you have a 3rd Round comp (albeit 15 picks lower), then a 4/6 from Philly in a trade.

Ideally, I’d be on board moving up 5-10 spots in round 3 though for the right player, where the cost would be a 5th or a 6th, pending on how far you go. If a player like Jachai Polite is lingering or JJ Arcega-Whiteside I’m pulling that trigger 100%.

Ultimately,  think we’ll see EDGE and WR with the next two picks, as I believe recency bias has been a bigger factor in fan clamoring for interior O-Line bodies.