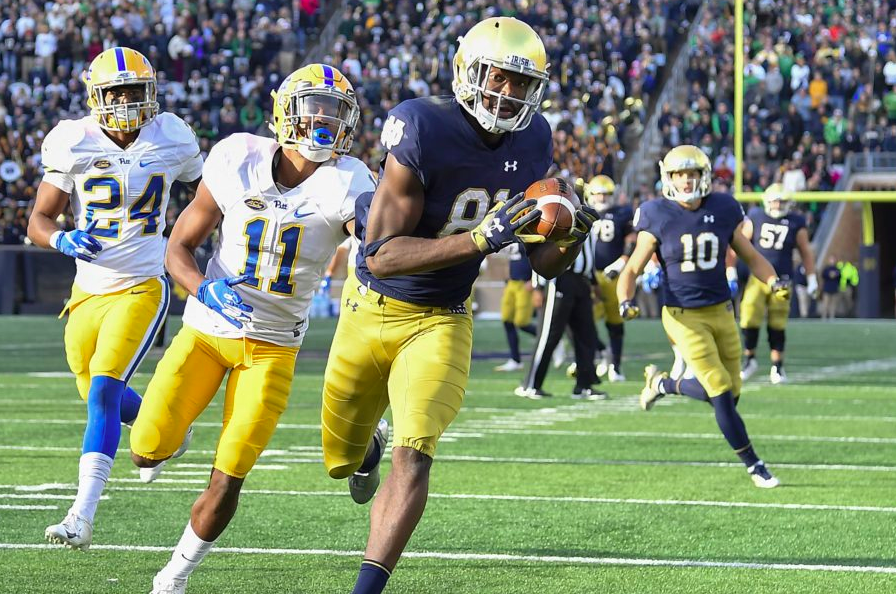 The Baltimore Ravens traded the 102nd, 191st, and 193rd overall picks to the Minnesota Vikings for the 93rd overall pick, using it to choose Notre Dame WR Miles Boykin. RSR staff react to the trade and pick here…

Love the complementary skill sets of Hollywood Brown and Miles Boykin. Greg Roman must be champing at the bit to put this offense together now. Next chore is to shore up the interior offensive line and with three of the next 25 picks available to them, I expect Eric DeCosta to get one and an inside linebacker to boot. Jaylon Ferguson at pick No. 85 is a steal and fills a need. Will be interesting to see if the Ravens still have interest in Zeke Ansah. It was a long Day 2, but a very productive one.

For the second year in a row, I’m loving what the Ravens are doing. Boykin is good value, and exactly what the Ravens need. Eric DeCosta isn’t messing around: he’s going to throw as many weapons around Lamar Jackson as possible. It’s refreshing to see.

If DeCosta can go out there and get an iOL and grab some good depth pieces in day 3, this is a home run draft to continue building for the future.

He does need to work on his routes, and his releases, and I’d like to see him be more physical at the point of attack.

But he was DeCosta’s guy, and DeCosta went to get him.

Really a quality pick. Tons of untapped potential here. Could be special at the catch point and a load to bring down in the open field. If he gets more urgent off the line, the sky really is the limit for this guy. Ravens now have an interesting group of weapons.

Boykin is a huge outside receiver to add to the Ravens stable of slot ponies. His average catch at ND was 11.8 yards from the LoS, which is a legitimate deep threat.  He has 33.5 inch arms which would be typical for an NFL guard and his run blocking must have been a factor in the decision to trade away the spare change to move up.

From a draft capital perspective, I don’t like the Ravens giving up 2 of their 6th-round selections with their ability to identify talent there. While they got a small gain in JJ value 128 for 120.4, the flatter valuations in this draft mean they probably lost some value. There will be a lot of pressure on the UDFA process late this weekend to make good on those 2 lost selections.

If they don’t trade again, the Ravens will have spent 69.8% of their draft capital by the JJ chart on WRs Brown and Boykin. Those 2 will define the success of this draft, even if Ferguson produces at a high level.