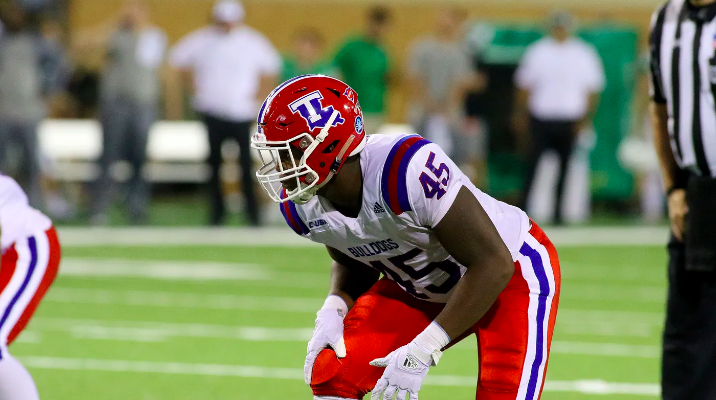 In the third round of the 2019 NFL Draft, the Ravens selected Louisiana Tech EDGE Jaylon Ferguson. RSR staff react to the pick here…

The Ravens replace Suggs with the guy who broke his sack record. He averages essentially a sack a game, even against bigger schools. His push-pull is second to none, and his hand work is insane. What he lacks in athleticism, he makes up for in speed/power. If production and sacks really do translate to the NFL, those 45 career sacks look especially nice.

Coachability will be the question – but this is a guy who, on draft night, was helping tornado survivors.

The Ravens just got a huge steal. I mentioned on Twitter that the reason Ferguson fell was because of testing. Put in the game tape and this guy is an absolute beast. He can put his hand in the dirt, stand up, go inside for pass rush. The versatility is a real plus for Wink Martindale. Fans will absolutely love this pick now and in the future.

Quality player at a quality price. Jaylon is an extremely productive pass rusher who needs work in the run game, but is an absolute freak against offensive tackles.

Don Martindale is extremely creative when it comes to generating a pass rush, and I am excited to see how he will use Ferguson in a limited set of snaps.

Such a Ravens pick. Ferguson is a power edge in the mold the teams likes and give them an edge-setter who can create pressure with strong hands and just enough burst to get home. Very good pick and a good complement to the current depth chart on the edge.

Another year, another great 3rd round for the Ravens.

Ferguson will be the next great Ravens pass rusher. I don’t want to hear “he takes plays off.” That won’t happen in this defense. He could be a 6-8 sack guy this year in this defense. Here’s the ultimate knee jerk: he will make a strong run as Defensive ROY.

I said this morning WR was a possibility in the third. EDC said he would take more swings at WR and in a very un-Raven like move he took two in the first three rounds. Boykin is the big receiver this offense needs who can win jump balls and be a threat in the red zone.

Excited for tomorrow, really like what DeCosta has done so far.

Ferguson is the triumph of tape over measurables, the Anti-Metcalf.  He’s a terrifically productive pass rusher at a lower level.  After the selection of Zeus in 2018, I love the selection of Ferguson.  He reportedly made 3 visits to the Ravens, which makes clear the Ravens really liked him, but had a personal issue to overcome.  I trust the Ravens are satisfied with his coachability given there were other pass rushers available as alternatives at 85.

Wink must be salivating at the possibility to use his strengths in fewer snaps to improve his explosiveness as a fresh pass rusher.

He gives the Ravens the young pass rusher they need and does not preclude them from picking up a veteran like Ziggy Ansah on a 1-year deal.