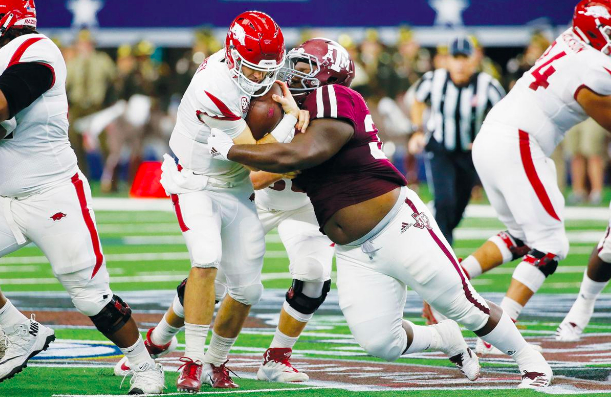 The Baltimore Ravens drafted Texas A&M DT Daylon Mack in the fifth round of the 2019 NFL Draft. RSR staff react to the pick here.

Daylon Mack is a big, low center of gravity NT who’s a former 5-star recruit. Mack didn’t test well but moves well for a player with his level of power. This pick is depth based but also could be viewed as insurance on Michael Pierce, who’s a free agent at the end of the season.

Daylon Mack is a guy i really liked coming into this draft. While he can be viewed as an insurance policy for Michael Pierce, who is set to become a free agent next offseason, this also allows for a deep rotation for the defensive line next season and beyond.

Mack is a strong powerful force on the interior. This is great value for the Ravens.

Death, taxes and the Ravens taking a defensive lineman in the draft. This is a typical Ravens draft pick, a rotational player who provides depth. 5.5 sacks last year at A&M shows he can get to the QB and be disruptive in the backfield.

This was a deep DT class and Mack is a pure DT/NT, but not a 5-tech. In college, he showed some ability to compress the pocket, particularly as a senior, but I think it’s unlikely he’ll be able to convert that to the NFL. In the best case, he’s a rotational run defender who gives the Ravens another option inside on 3rd down with Za’Darius Smith gone.