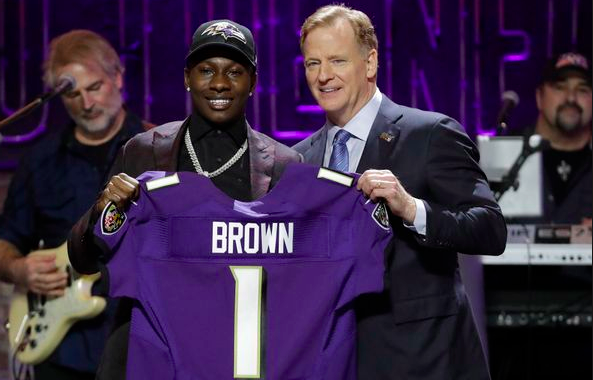 Well, it’s that time of year where we, as NFL fans, have little to look forward to, and only slightly more to write about. I won’t let that stop me, though. As such, I’ve decided to take some time to think about the aftermath of the Ravens draft. Who won, with the players drafted? Who lost, because of the players drafted?

Strap in, folks. There’s going to be at least one of these takes with which you take exception.

The Winners of the 2019 Ravens Draft

Lamar Jackson: First and foremost, Lamar has to be close to ecstatic about Eric DeCosta selecting not one, but two wide receivers, as well as a running back (and a guard!) early in the draft – especially when Joe Flacco never got weapons, amirite?!

Remain calm. That was a joke.

Anyway, Marquise ‘Fetus’ Brown provides a speedy (and undersized) threat for LJ, while third-round pick out of Notre Dame, Miles Boykin, provides a speedy (and big) outside presence. Add in the speed of RB Justice Hill, plus Lamar’s own legs, and this offense is fast. It’s so fast, it makes fast offenses look… not fast.

If you truly believe that Jackson is the quarterback of the future, then the Ravens need to provide him with the weapons and offensive scheme to flourish with his skillset. This is their first shot at doing so, and I think LJ recognizes that fact.

Gus Edwards/Mark Ingram: Look, man. Running 60% of the time will wear your running backs down, even if you have a stable of powerful runners. Justice Hill gives a nice change-of-pace, home run threat behind Edwards & Ingram, which will keep the tread on the tires for the power runners. They also got what could be a very good LG (or RG…Yanda to LG isn’t a bad idea, actually) in Ben Powers, the Dream Crusher.

Mark Andrews/Hayden Hurst/Nick Boyle: This one is easy. The Ravens didn’t take any tight ends. These guys will be a focal point of the offense. Plus, the addition of the wide receivers (all 76 of them) means that Andrews won’t be doubled downfield.

Matthew Judon: Judon probably watched Winovich go off the board and winced with the rest of us. He needed a running partner in a bad way (no disrespect to Tim Williams and Tyus Bowser, but they haven’t really impressed me, sans some flashes). The Ravens gave him Jaylon Smi.. FERGUSON. With a bit of athleticism training, and if he can build his pass rush counter repertoire that doesn’t currently exist so stop saying it does, then he will be a monster force, and a very good replacement for the HoFer Terrell Suggs (maybe he breaks his franchise sack record too, just spitballing here).

[Related: Ferguson Mirrors Great Ravens Rushers of the Past]

Greg Roman: The man is the new offensive coordinator, and he got two drafted wideouts, 8,437 UDFA wideouts, a drafted running back, and very underrated UDFA running back, and a handful of ‘test em’ OL to go along with Powers. Not only does this give him a good amount to work with, it also secures his job through at least 2020 – because allowing rookies to develop is a thing.

David Culley: Bobby Ingram gets a bad rap, I feel like. It’s not like the Ravens gave him a lot to work with. The Ravens didn’t make that same mistake with Culley, who has a decent resume when it comes to developing wideouts. They gave him a high-ceiling guy in Brown, and a high-upside guy in Boykin. Not to mention having Willie Snead, Chris Moore, and two unproven guys in Jaleel Scott and Jordan Lasley. (Don’t even say the name Jaylen Smith to me.)

Matt Skura: Well, he really only has Bradley Bozeman to compete against for the starting position, so that’s a win. Also, assuming Powers is an upgrade at left guard – where most of Skura’s allowed pressures came from – he should have less trouble overall at the center position.

The Fans: The Ravens have a… wait for it… exciting offense. Finally! It’s only been, what, damn near 25 years? Actually, caveat here – they have the pieces to make an exciting offense. It doesn’t mean it will be. Either way, the fans have (kinda) gotten what they’ve been screaming for since 2012.

The Entire Offense: Trace McSorley. Thanks.

The Losers of the 2019 Ravens Draft

Jaylen Smith: B-but he has chemistry with Lamar! Stop it. Right now. Jaylen’s hands are bad, his routes aren’t great, his blocking isn’t great. The fact that the Ravens drafted two wideouts, signed Antoine Wesley after the draft, and have Snead/Moore/Lasley/Scott/Roberts on the team means Smith is likely a practice squad candidate with WR3-4 upside.. If you can call that upside.

Alex Lewis/James Hurst: With the addition of Ben Powers, assuming he’s as good as his tape shows, I’d say that Lewis and Hurst are relegated to backup roles – or at least they should be. There’s a solid chance that Harbaugh is Harbaugh, and doesn’t let Powers start regardless of clear skill gap, a la Orlando Brown, Jr. in 2018.

Kenneth Dixon: Come at me, Dixonstans (looking at you, Mitch). The oft-injured, or suspended, or injured-and-suspended running back has some talent. That’s not up for debate. However, the additions of Justice Hill and L.J. Scott (can we talk about how frustrating it’s going to be, with that name?) make it hard for me to see an avenue in which Dixon makes the team, let alone finds meaningful snaps. (In other words, trade him to Oakland for a 3rd round pick, where he can replace Isaiah Crowell, who just tore his ACL. Gruden is dumb enough to make the trade.)

John Harbaugh: I’d think Harbs is kind of out of excuses, given the influx of talent at skill positions, and proven coaches. Barring a rash of inj…. Nope, not saying that, I’m sure there are expectations at the position that are higher than normal.

The Fans: Wait, what? But didn’t I say…. Yes, I did. This will be a very boom/bust team, the way it’s set up right now. The fans could be in for a huuuuuuge letdown.

But until then, I’m off to do the most average podcast on the planet. Make sure you check out Neutral Zone Infraction, which I host, along with Adam Bonawhateverthehell, and Colenadian Jackson (Spotify, iTunes, etc). You won’t regret it. Maybe.