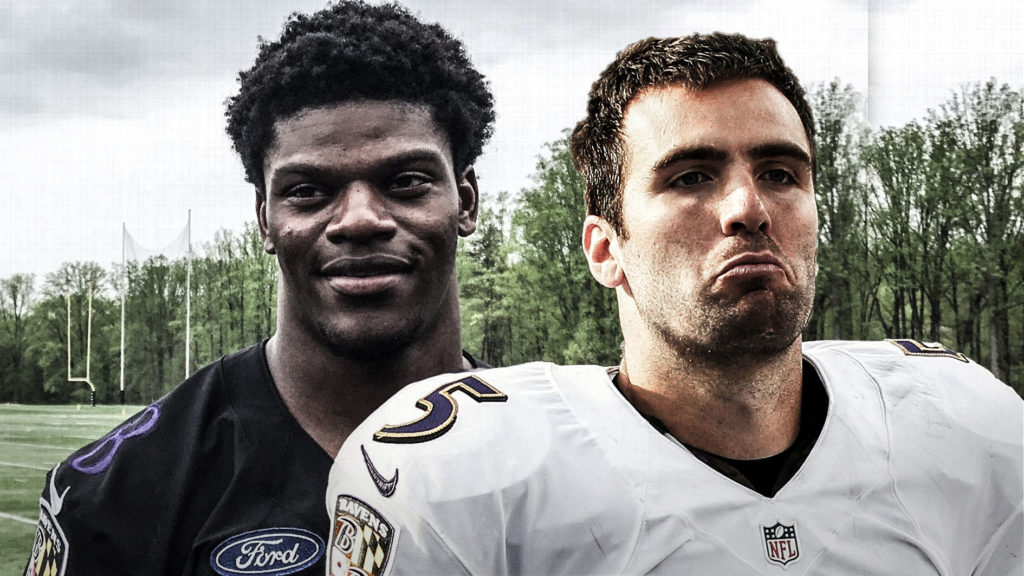 I know, I know… it’s post-draft and we need to be focused on the roster, draft grades, and the like. But as an extension of this 2019 Ravens draft class, I’m seeing a widespread fallacy that… well, it’s time to kill the narrative.

What am I talking about?

“The Ravens are giving Lamar Jackson weapons – imagine if they would’ve ever done this for Joe Flacco!”

Disclosure: this was upwards of 1,500 words in my initial go at it because I get heated over stupid. Which means a lot coming from yours truly. But I’ve dumbed it down, so no complaints. Let’s just quickly rattle off the list so we can all go back to being intelligent fans, mkay?

LEAVE THE PAST ALONE

Folks, we don’t have a reality stone to change the fact that Joe Flacco is a Denver Bronco. We don’t have a time stone to go back and change the results of last year’s draft. We need to focus on the here and now. The only time you should give a crap about the past is if you’re watching EndGame (this is not a spoiler by any means) or if you’re a Steelers fan shouting unnecessarily loud about rings your team won eons ago.

“SIX! DURRRRRRR”….Don’t be this guy

Let’s stop comparing players in different eras (micro-eras?) of the NFL. The NFL that Joe Flacco was thrust into in 2008 was a more run-heavy league compared to the aerial assault that is the game today. Having one great, one good, and one meh/journeyman wide receiver was once the norm for most teams, and that’s exactly what Flacco had early in his career.

DIFFERENT VERSION OF THE RAVENS

The Ravens have also undergone a transformation since 2008. A team that was once so unbelievably awesome at drafting defensive talent found themselves going back to the well time after time with all but guaranteed success in doing so. As a result, building the offense turned to more of a free agent approach.

Fast forward 10ish years and the Ravens miss drafting defenders as often as they hit (I’m specifically talking about the days of Matt Elam, Terrence Cody, Sergio Kinde, etc.) and as a result begin to dish out free agent contracts to defenders in order to stay afloat (top-10 D is staying afloat for Baltimore). Suddenly the cash-strapped Ravens can’t afford another Derrick Mason or Anquan Boldin or Smitty. They took a shot on Breshad Perriman – he disappeared like a ghost, and four years later they’re trying again.

That is actually on par with the rest of the league!

The 2019 draft class in Baltimore featured a pair of wideouts in the first three picks, and it very well may be a direct ramification of the limited cap space Ozzie left behind for Eric DeCosta, paired with a piss poor free agency crop at wideout. I mean it was real bad.

When Golden Tate is the best out there, why bother? Just look to the draft, like the Ravens did.

Mull this over: During Joe Flacco’s first two years in the NFL, he had a wideout trio of Derrick Mason, Mark Clayton, and Demetrius Williams. Today that sounds uninspiring as you think about their lowest of lows, but at that particular time? The Ravens had Mason with back-to-back 1K+ yard seasons, 1st round pick Clayton in the 4th and 5th year of his rookie deal (players typically shine in contract years), and Williams as a 4th round pick who showed flashes at times (COMPLETRIUS!). Flacco also had a stellar pass-catching trio of backs in McGahee/Rice/McClain (76 receptions in ’08, 114 receptions in ’09).

Also, Todd Heap reeling in 88 catches for a shade under 1,000 yards and 9 TD over those two years.

Back to Rice for a moment…he was a consensus top-3 fantasy pick for several years running. Because of the way his career ended, we tend to forget how incredible he was from 2009-12.

If that’s not considered ‘weapons,’ I’m confused as hell…

Years 2011-on don’t matter in this particular argument. They simply don’t, because you need to compare apples to apples and stop trying to predict the future. Humor me – if Hollywood’s Lisfranc never fully heals and he becomes another Ravens prototypical Round 1 wideout bust, and Miles Boykin never outperforms his floor, causing the Ravens to revert to the veteran route and shy away from drafting wideouts, then the narrative is dead, right?

You just can’t predict the future, so base your gripes on years one & two only – no matter how inaccurate of a gripe it is. And if you still want to argue that late-career Flacco got screwed in regards to WR, blame the Ravens for the failed drafts causing a free agency frenzy to fill voids and putting the Ravens up against the cap, making them unable to afford a big splashy name at the position, as well as a spattering of piss poor draft attempts at wideout when they didn’t try to address equally pressing needs brought forth by the aforementioned piss poor drafts.

In short – don’t be stupid. Flacco had weapons early in his career, much like Lamar has right now. Hell, I’d say Mason in 2008-09 was easily better than anybody the Ravens have rostered at the position during the LJ Era thus far (of course we won’t know until we see what the rookies bring). Yes, the Ravens may have gone more of a veteran route than via the draft, but weapons are weapons, and the numbers don’t lie.

Just stop lamenting the past and hope/be happy the Ravens now have weapons on offense to help push them back to another playoff run.