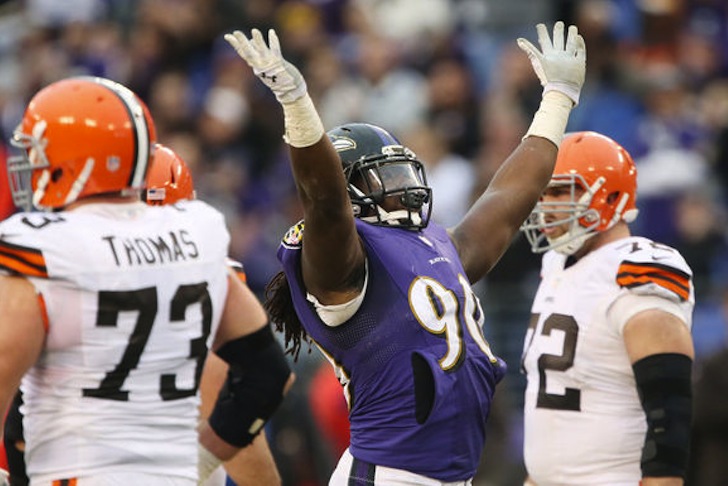 The Baltimore Ravens are bringing back an old friend.

Former Ravens’ LB Pernell McPhee, who left to go play in Chicago and Washington, is returning to Baltimore on a one-year deal, per league source. McPhee has 31 career sacks and six forced fumbles, and Ravens looking for some more.

When he was drafted, Za’Darius Smith was said to be the next Pernell McPhee. It took awhile but eventually Smith did effectively play the role of a versatile defender capable of pressuring inside or out. And just like McPhee in 2015, he cashed in during free agency. Who could blame him really?

Ironically, McPhee now replaces Smith. On paper it seems like a reasonable move but the devil is in the details. Given McPhee’s history of injury, let’s hope that there is next to no guaranteed money in his 1-year deal. That way if McPhee gets to camp and misses time or spends most of it in the trainer’s room, the Ravens can just move on, particularly if Tyus Bowser and/or Tim Williams ever play to their draft status.

— The Ravens hope McPhee can regain some of his production from when he was in Baltimore. He had a breakout season with the Ravens in 2014 with 7.5 sacks.

— That performance led to a lucrative deal in Chicago where the production began to tail off. He had six sacks in 2015, four in both 2016 and 2017 and none last year for the Redskins.

— This is a low-risk, high-reward type of signing. The one-year deal won’t hamper the Ravens and McPhee has an opportunity to show he has something left in the tank.

— It will certainly be interesting how this pass-rush comes together this season.

This is not a deal to get real excited about but it makes too much sense right now. McPhee has been on the decline the last couple of years and battling injuries. I was sad to see McPhee go after the 2014 season. Let’s hope he can closely resemble how he looked that season instead of the last few.

I love the signing of Pernell McPhee for the #Ravens – I dont think it eats into EDGE snaps. I think we'll see him in the JOKER role vacated by Za Smith. 4 man line:
DE – Judon
JOKER – McPhee
DT – Henry
RUSH – Ferguson

This isn’t the type of splash move fans we’re hoping for, but this is the perfect signing for the Ravens. McPhee will mostly be used in the JOKER role, vacated by Za’Darius Smith so it’s unlikely he eats into and edge snaps for the young guys.

For a no-risk deal, this makes absolute sense for the Ravens.

Low-risk/high-reward deal bringing P-Mac back to Baltimore assuming his 1-year deal falls in line with what we typically see this time of year (low guarantee/incentive based). While his role in the Ravens defense will mimic what we had in ZD (who ironically filled the void McPhee left), the injury concerns and dwindling production can’t be ignored.

It’s a solid move. I don’t hate it. I’m also not excited about an injury-riddled, rotational 30-year-old with his better days behind him.

McPhee had a monster year in 2014 when he drove the pass rush with inside pressure that helped Dumervil and Suggs rack up big sack totals. In that contract year he had 26 QHs to go with 7.5 sacks in 424 pass rush snaps (excludes penalties). That priced him out of Baltimore and he had 4 years of slowly declining productivity with the Bears and Redskins.

Despite having approximately 25% of the pass rush snaps he had in 2014, he still registered 8 PDs (0 sacks). From my way of thinking, that’s not a guy who’s completely done as a pass rusher. However, he will likely play a purely situational role in 2019 assuming he makes the team. McPhee was always a player who benefited from rest and Dean Pees did a good job of managing his consecutive snaps in 2014, particularly those rushing from the inside. If anything, Martindale is a better manager of snap count and making use of player strengths. While I don’t see Pernell returning to productivity levels from his prime, I hope he is able to play 200-275 total snaps for the Ravens this season (approximately 15 per game).

Qualitatively, this seems like a reasonable insurance policy for the Ravens, but I’ll need contract details to value it.

McPhee fits the power edge profile I figured the Ravens would be looking for. He was Za’Darius before Za’Darius. He still has his trademark heavy hands and the ability to win on the interior versus guards and centers and convert speed to power on the edge. Good signing.