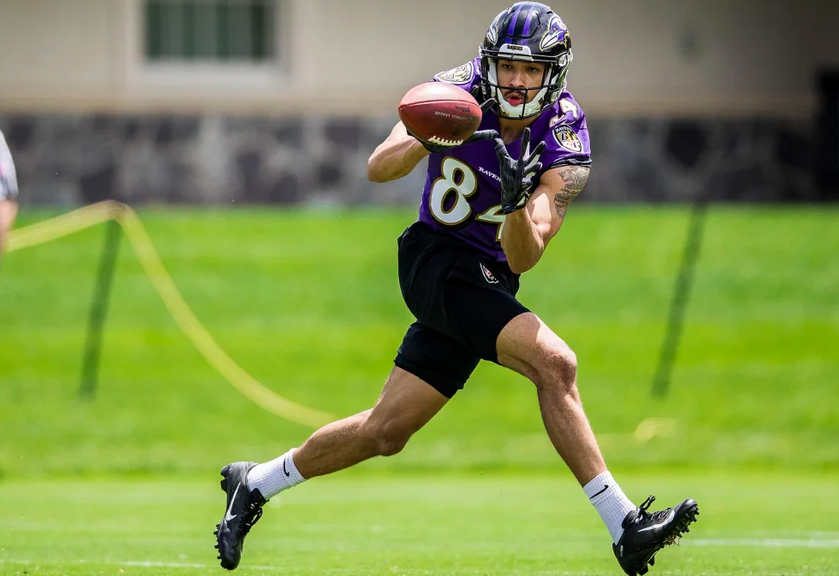 Training camp for the Baltimore Ravens remains a couple of months away, with roster spots to be had by many players on the 90-man roster. One of the key battles fans will be keeping an eye on is for the wide receiver spots available. It is a widely shared belief that the first four spots are a lock for Marquise “Hollywood” Brown, Miles Boykin, Chris Moore and Willie Snead IV. However, there are still two or three spots to be had, with a laundry list of names competing for those coveted spots.

There is a handful of criteria that goes into picking players to fill these spots, including receiving ability, upside, special teams contribution, and much more. While it is still early, we will go through the options to fill these spots with a probability rating for each to crack the opening day roster.

Seth Roberts is another player some may consider to be a lock, given the guaranteed $1 million given by the Ravens. I do not count myself in that group. In the grand scheme of things, that commitment doesn’t guarantee anything. Look back a couple seasons ago to Justin Forsett, who had quite a bit of money guaranteed only to be cut, signed again, and cut once more a few weeks into the season.

With that being said, there are plenty of reasons to like Roberts’ odds to crack the opening day roster. Roberts possesses solid speed and has played a few seasons in the NFL with modest production. He has shown an ability to get open and make big plays when given the chance. He also brings special teams ability, which the Ravens covet in these roster spots.

The biggest knock on Roberts are his hands, which have been suspect at best. While his drop rate has decreased over the last couple of seasons, the issue still remains and with this being such a focal point, that is a big strike against him.

Lasley is the prototypical high-ceiling type of wide receiver, but the red flags are there. The UCLA product possesses great size and speed combination, and runs fantastic routes. His ability to get open is one of the best on the roster, and he has developed a rapport with Lamar Jackson in their time together in Baltimore. All of which are great traits to have.

Still, Lasley has serious drop issues. While he can separate and get open, if he struggles to hold onto the ball, the former is a moot point. Lasley will need to prove the drops are behind him in training camp and the preseason to lock down a roster spot moving forward.

The biggest thing working against Lasley is his lack of special teams ability. In the 17 games the Ravens played last season, Lasley was inactive for all 17.

With the infusion of young talent on roster, the odds have shifted against Lasley, but he still has some of the higher odds here of cracking the final roster.

Which WR(s) make the roster?

Scott was drafted as a bit of a project, and that showed in training camp and the preseason. While the former New Mexico State product possesses ideal size and strength, he is facing an uphill battle to make the cut here. Scott is raw with his routes and, at least from appearances, isn’t much of a factor on special teams.

The hardest thing for fans about judging Scott is the fact he was stashed away on injured reserve last season, so nobody knows what to expect. Training camp and preseason will be pivotal here to see how far the Aggie product has come.

Former Texas Tech Red Raider Antoine Wesley is one of the most intriguing prospects coming into camp. Wesley possesses the ideal frame and is about as polished a receiver as can be had for an undrafted free agent. I had a round four grade on Wesley, so getting him undrafted feels like incredible value.

Wesley has the ability to play special teams, possesses strong hands, and is a willing blocker on the outside. While his route running needs a little work, everything that can’t be taught, Wesley possesses.

The former Ole Miss receiver has had injury issues the last couple of seasons that has kept him from being able to show what he can do. Now, entering a fresh year with what seems to be a clean bill of health, Quincy Adeboyejo has a chance to show what he’s got and contend for a roster spot.

The Rebel product possesses great speed and size combination, with strong hands. Similar to others on this list, his routes are a little sloppy and in need of working, but that is a fixable issue. Another question is how up-to-speed he will be having been away for so long with injuries. Will there be a catch-up period for him to get his feet under him? From the looks of Organized Team Activities, he seems to be ready to go and hungry to make this roster.

Special teams is another added bonus with Adeboyejo, having played them in college and in a couple of preseasons with the Ravens. That alone gives him a better chance at cracking the roster.