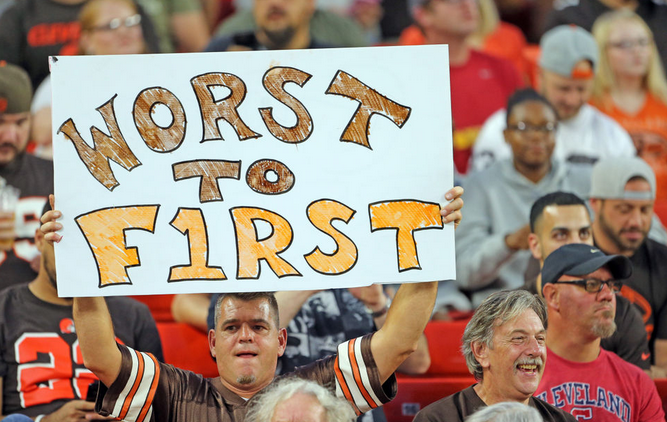 We need to have chat about this newfound, inexplicable, and childish arrogance you’ve displayed toward not only Ravens fans, but NFL fans as a whole.

We understand it’s been a long time since you’ve known what it’s like to be a winner after suffering decade upon decade as a perennial loser, and being the paper-bag laden fan base that calls The Factory of Sadness home. We understand that you still can’t remember what it’s like to sniff the playoffs (it’s been 17 years) let alone win a division title (30 years) or accomplish something as simple as a winning season (12 years) – but none of that excuses this erratic behavior and spouting off at the mouth any chance you get, saying asinine things like ‘We’re the number one defense’ or ‘we’re Super Bowl bound.’

Back in the day, when Browns fans started getting arrogant in the offseason I would think it was adorable, like a little chihuahua yapping at the big dogs thinking he can hold his own; but that yapping has gotten louder, growing into a pestering nuisance, and with the Browns fans’ loud bark still not matching their team’s heretofore weak bite?

It’s easy to say the Browns fans have become the most obnoxious fan base in the NFL.

Ya see, Brownies, you simply can’t raise your voice until you win something. Right now, you’re still the lowly Browns that finished 3rd in the AFC North last year, and even worse? Finished dead last in the AFC North in 13 of the last 16 seasons.

All of that failure and yet, you think one good offseason gives you reason to puff your chest?

Yes, Baker looks like a promising talent at QB – your first after a long (long, long) line of failed QB’s – but crowning him a top-tier QB after a half season is just foolish, especially for a fan base that loves to yap at Ravens fans with the same negativity towards Lamar Jackson, who also played just a half season (except, yanno, actually won the division).

Yes, the Browns have some great pieces around which to build…but can we talk about how that came to be?

Simply put, your franchise has been laughable (Cleveland Clowns) for all of recent memory, thanks to an inability to hit in the draft at any level or attract big name free agents for eons. In turn, those failures left a plethora of open cap space to carry over year after year. They used all of that cap space and those useless draft picks to acquire expensive talent from teams that can actually draft and develop players (see Jarvis Landry – they knew he wouldn’t actually go to Cleveland as a free agent, so they traded picks to Miami, then grossly overpaid to keep Landry around).

Couple that with finally hitting on a few high picks? And here we are.

Before we move forward, this brings up a big point:

The Cleveland fan refrain of “guys want to play for the Browns now” is a complete joke statement.

Jamie Collins was traded to Cleveland.

Jarvis Landry was traded to Cleveland.

Demarious Randall was traded to Cleveland.

Olivier Vernon was traded to Cleveland.

I guess you can hang your hat on Sheldon Richardson choosing Cleveland? The same player going on his 4th team in four years? Or maybe Kareem ‘kicks chicks’ Hunt, who had no other offers so he settled for a one-year deal in Cleveland (where he’ll be suspended for half of it) based solely on having former Chiefs GM John Dorsey there and knowing he’s always down to sign guys regardless of their being trash humans off the field (see Hill, Tyreek)?

Is it still too soon to talk about Tony Jefferson turning down more money from the Browns to sign with Baltimore? Or just stick with the general theme that players don’t actually want to go to Cleveland, they’re just shipped there?

So let’s’ take all of those moves the Browns made between last offseason and this one, and I’ll be fair here – the Browns have a good team on paper.

One more time: the Browns have a good team on paper.

Did you catch it, Brownies? Good. Team. ON. PAPER.

I know you’re not used to the word ‘champs’ in any capacity, so let me explain what ‘Paper Champs’ means: it means you added good players that should improve your team, but they’ve proven nothing whatsoever, and you’re still the 7-8-1 Browns from 2018 until proven otherwise.

But of course not! Those chihuahuas keep on yapping louder and louder to the point where Greedy Williams – a once promising first-round prospect that fell to Round 2 and CB5 for a myriad of reasons – decides he’s gonna go off thanks to all of the unwarranted Browns fan hype:

“I know one thing. The Browns are going to the Super Bowl this year. That’s a fact.”

Upon saying this, Roger Goodell immediately issues a drug test for Greedy. Same for Beckham, who stated that he wanted to turn the Browns into the Patriots… I think maybe he meant the 90’s Pats when they finished 4th or 5th in their division eight out of 10 years?

Well that’s just it. There’s nothing to puff your chest about and we, the other 31 fan bases, can’t even take you seriously when you act like you’re above us all right now as if it didn’t take eternally shitting the bed to get to this point.

Until those heinous brown and orange uniforms show us on the field that they can succeed and are no longer the dumpster fire with which they’ve become synonymous?

Maybe try humility with a side of confidence, as opposed to brazen, unwarranted hubris that’s likely to smack you in the face like a Gerald McCoy sack of Baker Mayfield in Week 4 when the Ravens once again put those yapping chihuahua’s down…

See? You win the division and you can talk smack all you want!

Cheers Brownies, and enjoy your last few months as 2019 Offseason Paper Champs before reality kicks back in!