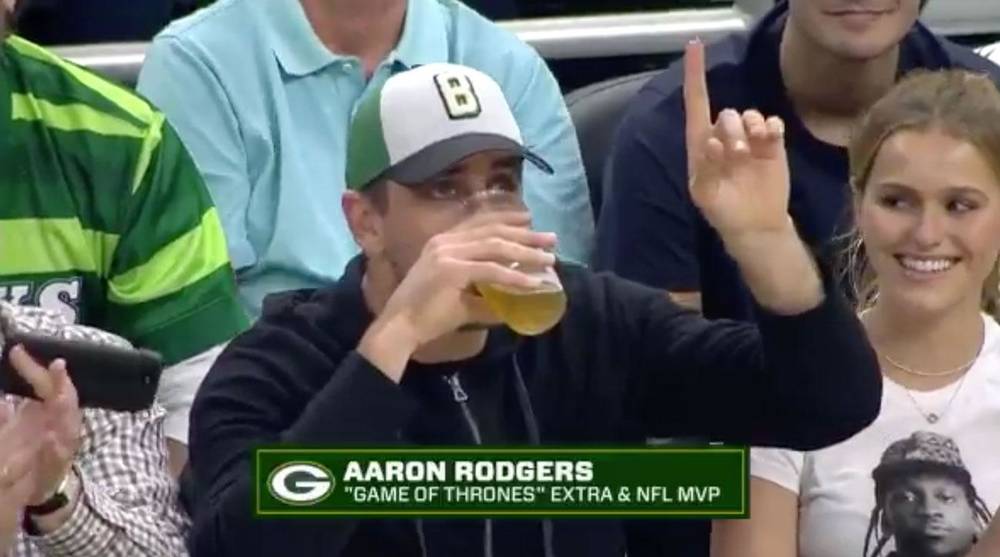 Just because we’re in the thick of the #NFLDeadSzn doesn’t mean there’s nothing to talk about relating to our Ravens, and the league as a whole. In fact, I cherish these offseason storylines, simply because they’re so irrelevant and silly, but with nothing else to discuss, we turn mole hills into mountains.

Aaron Rodgers chugs beer like a high school kid at his first party. Tom Brady kinda chugged beer on The Colbert show last year (but left some in the cup so ***), and suddenly every QB at a public event is being spotted with the cameras, in hopes they’ll slug back 12 ounces of golden perfection (or watered down light beer aka piss water). I, for one, love this. We, the fans, have been doing this at tailgates for decades. It’s nice to see the QBs get down to our level and slug back some cold ones.

#QBChugChallenge is real, and I hope it’s here to stay.

I know, it would need a catchier name, but I can’t put 2 & 2 together right now for my typical punny self. Regardless, there’s this:

My biggest takeaway? Clearly means we’re bringing back Darren Waller, who played under Paul Johnson at Georgia Tech in 2013-14.

Seriously though, try not to overreact. This doesn’t mean the Ravens are switching systems (remember that whole playbook that they already have and aren’t suddenly changing in June?), but could look to Johnson for advice on his system to incorporate into the Ravens current playbook, possibly discussing pre-snap motions, or just a general meeting of the minds.

So this Spidey meme, except one is Baker Mayfield, and the other is Big Ben.

This week, Brownies RB Duke Johnson reiterated that he wants to be traded – this on the heels of the Browns putting him on the trade block in April, then pulling him back off and acting like they want him now. When asked about the situation, Baker Mayfield decided to opt out of the professional commentary like “hey that’s Duke’s deal I don’t want to comment on I’m just wishing him the best,” and instead take the a-hole route and say “You’re either on this team or you’re not… it’s self inflicted… it’s not awkward for anybody else in this building.”

Talking about another players contract situation – a player that devoted himself to the pathetic Brownies years – and calling it self-inflicted (when it’s not) is such a punk move by Mayfield. He’s basically just Big Ben from the standpoint they talk trash about their teammates in the public and create a more toxic environment, instead of handling things behind closed doors in a respectful manner.

Kid, ya got 3/4 of a single season in the books. Duke has hung tough through years of misery in Cleveland and deserves a chance to find more reps elsewhere without your crap 2 cents on the matter… and also it’s not your battle, it’s between Duke, the coaches and the front office.

Don’t be such a jackass.

One-time-almost-Raven-legend Gerald McCoy claims he chose the Panthers because… hell, I don’t know the reason keeps changing, but this note by Ian Rappaport, in regards to Baltimore and Cleveland, stirred speculation:

“Loved both teams, wasn’t sure about both cities.”

Was it Baltimore’s crime concerns that made McCoy unsure and eventually steer clear of Baltimore???

Of course not, you fool! Because the full quote that nobody wants to actually dish out starts with “Gerald McCoy wanted to stay in the south, where it’s familiar, rather than Baltimore or Cleveland.” And there it is – he didn’t worry about crime in Baltimore, he worried about familiarity, and thus, another speculative mountain made straight from a mole hill.

Also, also worth noting- “Crabcakes & Football” is what Maryland does best, not “Vegan Tofurkey Burgers & Football.”

This can’t be serious. The Cardinals are putting a five-year starting QB with a single playoff win in their Ring of Honor.

That’s it. I want to say more about it but what can you really say? The Ravens RoH is chock full of Hall of Famers and Super Bowl winners… Cards got a terrible Carson Palmer from the Raiders to play okay-ish for five years, and that’s plenty for their liking!

Up next in Arizona? Todd Heap gets the RoH call…

Here is one throw from Lamar Jackson during Thursday’s OTA … pic.twitter.com/4nUyt2pRcu

I love all of the Flockers. You are all very passionate about our boys in purple and black (one way or another), but seriously?

Every time a video is posted showing a throw or two from Lamar, everyone becomes a professional QB coach and critiques the hell out of his footwork, throwing motion, spiral, target… take the above for example and just see how many people say he threw his guy out of bounds or it would’ve been a pick (which isn’t true – this ball is perfectly placed when only the receiver can get it). Other clips get critiqued for a great throw if the spiral isn’t perfect…

IT’S JUST ONE CLIP! You’ve seen maybe 10 total throws from a weeks worth of OTAs, and you’re bashing the hell out of the kid? For me, I see progress, and shows he’s putting the work in. That’s all I can ask for. I suggest you pump the brakes on the criticism too and just enjoy the ride…