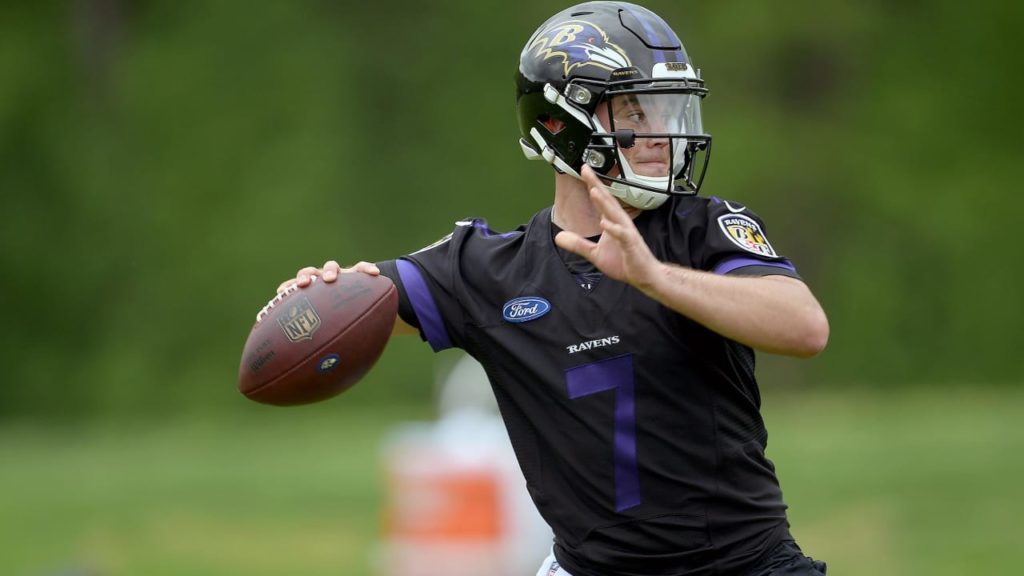 Trace McSorley was quietly impressive in his first workouts for the Ravens.

He kept his head down and made plays, especially inside the red zone.

There was not much pressure on the rookie sixth-round pick from Penn State because he will not be competing for a starting role at quarterback.

Nonetheless, McSorley will be one of the most intriguing players in training camp because of his versatility.

He has already drawn comparisons to Saints quarterback Taysom Hill, who was also used as a tight end, wide receiver and running back. Hill also made a mark on special teams, an area where McSorley also got reps in the offseason workouts.

While the Ravens view McSorley primarily as a quarterback, they plan to use his wide range of skills to their advantage.

“We see him fitting in as a quarterback, first of all, and that’s what we told him,” coach John Harbaugh said.

“I told him this weeks ago: ‘You’re going to be a quarterback.’ That’s where it begins, but it shouldn’t be limited to that. I think he can go out there and line up and do some other things possibly, just like RGIII will be able to do at times.

McSorley ran a 4.57-second 40-yard dash at the NFL Combine. He also has a skillset similar to starting quarterback Lamar Jackson, so he is essentially a seamless fit into the new offense as long as he continues to develop.

In the meantime, Robert Griffin III will serve as the Ravens primary backup to Jackson this season.

So, where will McSorley fit in during game days?

The Ravens would run the risk of losing McSorley to another team if he is placed on the practice squad. As a result, he could make the final 53-man roster and play on special teams or find a minor role on the offense.

New Orleans certainly found a role for Hill, who appeared in 16 games last season, including four starts. He completed three of seven passes for 64 yards. Hill also had 13 carries for 196 yards with two touchdowns. He returned 14 kicks and one punt, made six special teams tackles and managed to block a punt on special teams.

Ravens general manager Eric DeCosta is fully confident McSorley will have a role with this team. DeCosta was most impressed with McSorley’s passing skills.

“We brought him in, and he had a workout for us,” DeCosta said. “It was a very intensive workout, and he was really, really impressive. He threw the ball well in the pocket, on the move. He competed. He was in phenomenal shape. He was accurate, and he showed a live arm. I think that’s really important.”

McSorley already turned a few heads in the offseason workouts. He threw a 10-yard touchdown pass between two defenders to Jaleel Scott. He also showed nice touch in the red-zone drills.

Now, the Ravens will closely watch his progress throughout training camp.

“He looked good. He gets the ball out, for the most part, on time,” Harbaugh said.

“It’s not like a live practice at all, so you don’t get to see a lot of the other skills, scrambling and stuff, but he operated. How many mistakes did we have, guys jumping offsides or formations not right, or cadence issues? Really, I don’t know if we had one this afternoon. We had a couple yesterday.

Will Trace McSorley be part of the Ravens 53-man squad come September 8?