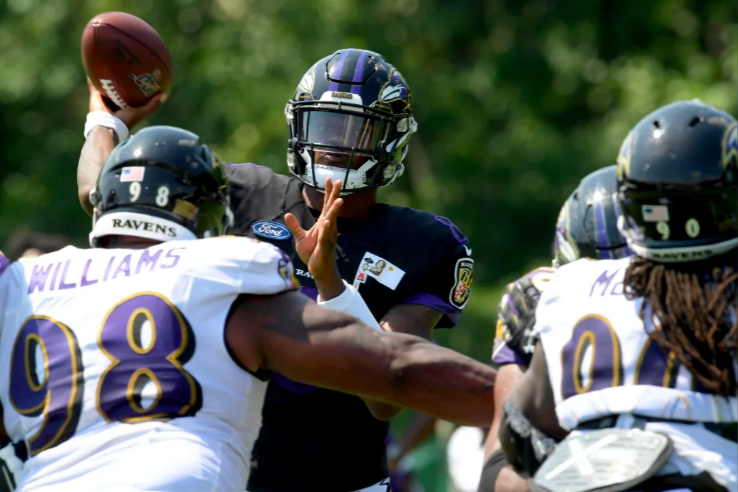 There’s no doubt the Ravens players and coaches have a chip on their shoulder.

They entered 2019 training camp with a slew of questions surrounding the team.

Can an offense centered around the running game succeed in the NFL?

Will Lamar Jackson take the next step in his development to make plays downfield when necessary?

How will the Ravens respond to the loss of several veteran leaders, mainly Terrell Suggs, C.J. Mosley, Za’Darius Smith and Eric Weddle?

The coaches like the potential but they are preaching patience because of the amount of work still involved.

Offensive coordinator Greg Roman had perhaps the toughest job this offseason when he was tasked with retooling the offense. So far, the players are making some strides and picking up the nuances of the play-calling and terminology, but it’s not close to being a finished product.

Roman has a clear schedule for the ongoing development.

“Every day is a new challenge,” Roman said. “The way I’m looking at it, I think it’s starting to come into picture for me. The first nine days, we’re throwing a lot at them. During that period, we’re getting a feel for what we want to lean on more or less, different ways to do things. Maybe, ‘We like this, we’re good at it, so let’s find a few more ways to do it,’ through that first week-and-a-half.

“Once that period is over, then we’ll start honing in on some more specific things that we’re working on. Right now, we still have the flexibility of having all this. Then, once we get through that process, which is a grind – we’re paying homage to the football gods – then we’ll start to narrow down our focus and dial in on specific things. At the end, it’s going to make us more flexible and adaptable.”

Roman was instrumental in revamping the offenses in both San Francisco and Buffalo. However, there was much more heavy lifting with the Ravens because of so many different packages and schemes.

“It’s definitely a next-level type of thing compared to what has been done in the past,” Roman said. “A lot of it, too, is watching your players practice and saying, ‘Wow, let’s try him on this. Let’s put him over here, because I think he’d be really good at that.’ So, a lot of it is how you’re using your personnel, as well.”

On the other side of the ball, coordinator Don “Wink” Martindale had the league’s No. 1 overall defense in 2018. However, he is also dealing with some challenges, especially with the pass rush.

Suggs and Smith combined for 15.5 sacks last season. The Ravens hope to fill that void with returning playmakers Matthew Judon and Patrick Onwuasor. The team drafted Jaylon Ferguson in the third round of the 2019 NFL Draft. He finished his career at Louisiana Tech as the all-time sacks leader in the NCAA Division I Football Bowl Subdivision with 45 sacks, but has yet to flash in training camp. The Ravens also brought back linebacker Pernell McPhee, who had 7.5 sacks for the team in 2014, for a potential added boost.

“I think we have some different body types, and some younger guys have a year under their belt, and you’re seeing some improvement there,” Martindale said. “A big addition, a guy who stood out to me last night is Pernell McPhee. He’s the old guard, or the ‘OG,’ as the players say it, and you can see that power and that old Raven rough, tough mentality, and he’ll help bring that along with that group. We’re excited about our potential pass-rushing.”

Much of the hype surrounds the secondary. The addition of Earl Thomas paired with Tony Jefferson gives the Ravens one of the top safety tandems in the league. The Ravens are also deep at cornerback with Marlon Humphrey, Jimmy Smith, Brandon Carr and Tavon Young.

Martindale is also preaching patience with that unit despite the obvious talent.

“I think with the whole thing, let’s not start pushing this boat too forward with our secondary right now,” Martindale said. “I think, like I said, we have a lot of practice to go, and it was the same thing that I talked about last year. Let’s start talking about how good they are come September, October, November – more October and November than anything else. But, we do have a lot of depth, and we have a lot of skill at that position. Yes, we do.”