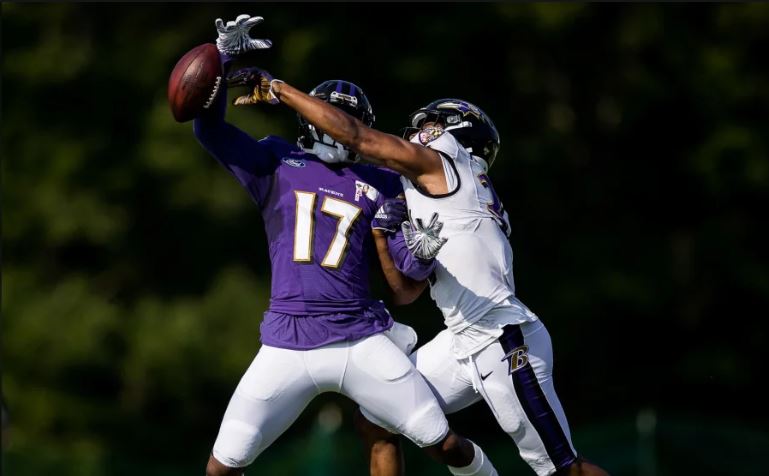 Monday morning’s practice marked the 5th straight day of training camp for the Ravens, and the last practice before a day off Tuesday.

The most notable player on the offense happened to be Jordan Lasley, although his day drew mixed reviews. Lasley was shut down by rookie CB Iman ‘Biggie’ Marshall, then locked down by CB Cyrus Jones, who got into a bit of a spat with Lasley, resulting in some punches being thrown before CB Bennett Jackson stepped in to break it up (and put Lasley on his back). Of course Lasley recovered soon after with a touchdown catch… after which he launched the ball into the adjacent sanitation pond.

Some called it immature. Others called it confidence. You make your own judgement here.

The offense as a whole remained flat, with flashes of what they showed the first few days.

Lamar Jackson turned in another uneven performance, with a handful of incompletions that he’d like to have back. Of course I cannot place blame for the shortage of completed passes strictly on Lamar, as his receivers delivered four dropped passes today – they came from the likes of Mark Andrews, Willie Snead and Mark Ingram. One of those drops led to the first pick of the day, as Marlon Humphrey cut off his receiver, nearly intercepted the ball as he knocked it up in the air, and Peanut Onwausor came down with it. Humphrey did manage to pick off Jackson later in the practice, as Lamar turned it over twice today after only one pick through the first four days of camp.

QB Trace McSorely didn’t fare much better, either, although his timing behind the line was much shorter with the offensive line getting bullied most of the day, and McSorely also watched his fair share of passes smack the hands of receivers and fall to the ground.

While the offense faltered today, the secondary flourished.

Cornerback Maurice Canady had himself a day, locking down at times Miles Boykin, Michael Floyd and Antone Wesley (stripped a pass clean out of his hands) and nearly picking off Jackson as well. Also receiving plenty of ‘attaboys’ today was the aforementioned Humphrey, who reeled in a Jackson interception, and tipped up another LJ pass that ended up being picked off by Peanut, as mentioned above.

Why not throw one more DB into the mix for a great day?

With Earl Thomas out, Chuck Clark jumped up to the starting unit alongside Tony Jefferson, and while Clark didn’t necessarily make the ‘ooh ahh’ sort of plays, he did contribute a seamless effort, including a solid effort locking down Seth Roberts in coverage.

Alright I’ll throw in one more – Anthony Averett was one of the only corners successful in locking down rookie phenom Miles Boykin, riding him out of bounds downfield on one play, and a leaping pass break up on another.

The defensive efforts didn’t stop at the CB level either on Tuesday. Contributions came at all levels, including a Chris Wormley deflection at the line of scrimmage, Peanut with his pick, a deflection and finding the QB in the backfield on a few occasions, and Shane Ray again making his presence known in the backfield with the 2nd unit.

Player of the Day: Peanut Onwausor

No practice Tuesday, so we’ll be back Wednesday with hopes of seeing Hollywood Brown make his Ravens debut, along with the return of several players out of practice on Monday!