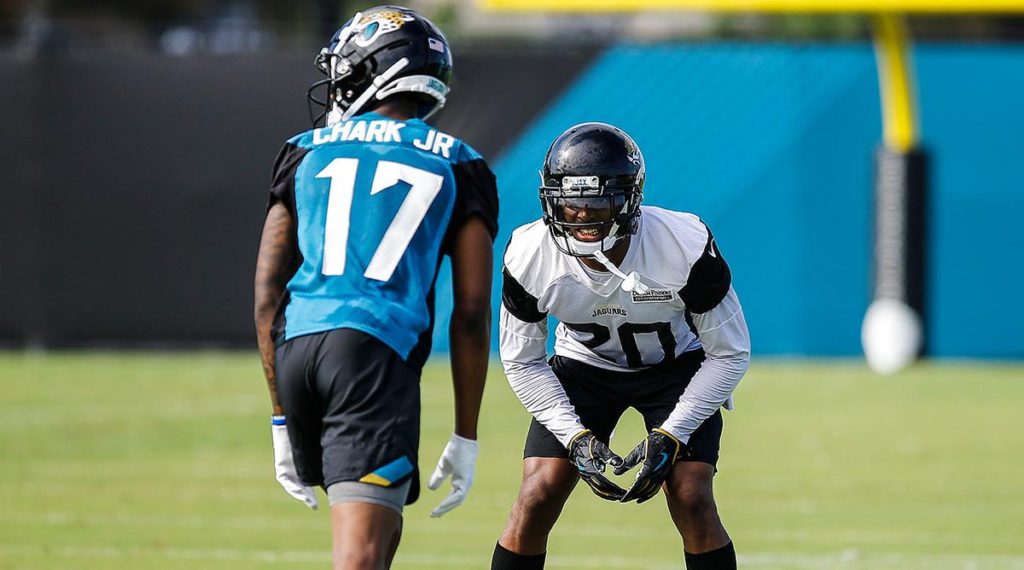 Lamar Jackson threw an 18-yard touchdown pass to tight end Mark Andrews, who leapt and made a one-handed grab in the back of the end zone between Jaguars safety Jarrod Wilson and linebacker Myles Jack.

That was easily the highlight of the second dual practice with Jacksonville on Day 11 of training camp.

It was a far cry from the previous day when Jackson made several highlight-reel plays during the first practice.

Overall, the Ravens offense had an uneven day with the quarterbacks resorting to a bunch of check downs.

Jacksonville cornerback Jalen Ramsey spent a good portion of the practice chirping at Ravens receivers. Unfortunately, the background music was too loud to decipher what exactly he was saying.

On one sequence, he lined up against Chris Moore, spewed a few words before the ball was snapped and then wouldn’t let the receiver get off the line. On another occasion, Ramsey played tight defense on rookie Miles Boykin, who could not corral an overthrown pass by Jackson.

It was a dominant performance by the defensive back and we have not seen the last of the brinks truck.

The other main highlight of the offense was a second-year tight end Hayden Hurst, who consistently created matchup problems for the Jaguars. Jackson found Hurst several times throughout various drills and they have developed obvious chemistry.

Jackson’s accuracy has been much improved throughout training camp and the key will be whether that translates into the games. Coach John Harbaugh is still undecided on how many reps Jackson will take in the first preseason game. However, if some of the veteran offensive linemen are held out of the game, it’s not likely Jackson will play much. The coaches planned to meet after the practice to discuss their options.

“We haven’t dialed it in exactly,” Harbaugh said. “We have a meeting tonight on all of that where we’ll dial it in exactly. I have my ideas on it. I think I know, but we’ll talk about it as a staff and figure it out and get a plan together.”

Rookie running back Justice Hill flashed with his runs, but dropped a pass during red zone drills. The Ravens will be watching him closely during the preseason game, especially when he is called on to block — an area where he has been inconsistent thus far.

With Robert Griffin III still out with a hand injury, rookie Trace McSorley has made the most of his reps. His accuracy and zip on the ball has improved just over the past week and he completed a couple of long passes downfield. Harbaugh said McSorley might also have an opportunity to play some special teams against the Jaguars.

“He’s throwing really well. He had a really good practice until the end,” Harbaugh said. “He had the pick in the two-minute [drill]. He expected the receiver to do something different than he did, and then Lamar [Jackson] got the balled tipped. Credit to the Jaguars’ defense for making those plays. But throughout the practice, we completed tons of passes. Trace looks sharp.”

Adam Bonaccorsi will have more on the defense from the day’s practice.

There was one skirmish on red zone drills with Ravens linebacker Tim Williams having to be restrained after exchanging words with Jaguars receiver DJ Chark Jr. Ravens safety DeShon Elliott also was involved but nothing escalated. Williams went to Alabama and Chark attended LSU, so maybe there was some lingering animosity from their playing days in the SEC. Jaguars running back Leonard Fournette, another former LSU player, was also talking at several Ravens players.

Otherwise, both dual practices were clean.