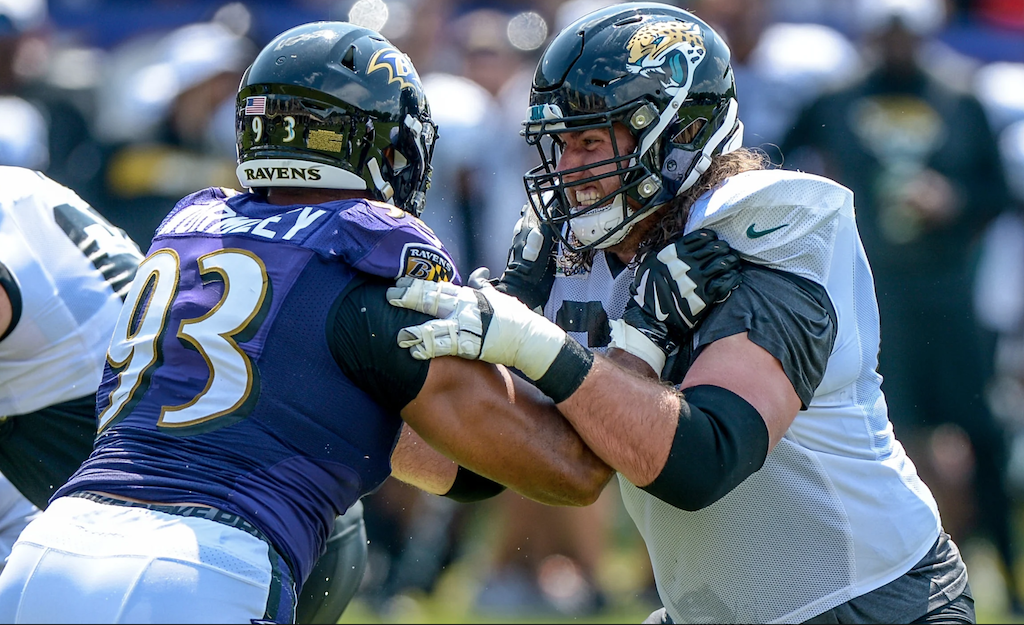 We hope to detect where and when a player goes down but until they play meaningful football and players are dropped to the ground, you just don’t know. Case in point, a swing pass from Lamar Jackson to Justice Hill during today’s scrimmaging.

From the shot gun Lamar faked an inside handoff to Hill who was lined up to the QB’s left. Hill continued through the play as if to run a power sweep right and then bellied out towards the sideline. Lamar looked left to draw defenders away, shifted his hips to the right and hit Hill in stride. Hill juked Myles Jack and then scampered down the sideline for what looked like a 20+ yard gain.

Leonard Fournette turned around, looked directly at me and asked rhetorically, “That wasn’t a tackle?” I shook my head no. The Jaguars big tailback thought that Jack had made the tackle. It was a questionable tackle even in one-hand touch.

That said, the play was well-executed and Hill has the look of an exciting, explosive player.

Here are the rest of my Ravens Jaguars Camp Notes…

Throughout the afternoon session Lamar played with poise and confidence. He put a little mustard on passes when he had to and showed nice touch when needed. He also threw with intelligence. In other words, he threw to spots where only his man could make a play. He threw to the back shoulder when it was required, soft tosses over defenders, high when his target represented a size mismatch and low in the end zone when receivers shielded or boxed out their defender.

During red zone 7-on-7 drills, Lamar had his way with the Jaguars, converting touchdowns seemingly at will. Four consecutive plays resulted in a back-of-the-end-zone crossing route conversion to Chris Moore who made a nice diving catch. The next play feature Hayden Hurst who positioned himself in front of the defender on a little curl just outside the right hash, keeping the defender on his back while Lamar drilled a fastball just outside of Hurst’s right thigh. On the next play Lamar found Miles Boykin in the back left corner of the end zone. Then, on the last of the four plays, Lamar dropped a touch pass over the linebacker assigned to the short right and in front of the corner assigned to the deeper right for a scoring toss to Hurst, just inside the front right pylon.

It was an impressive sequence. 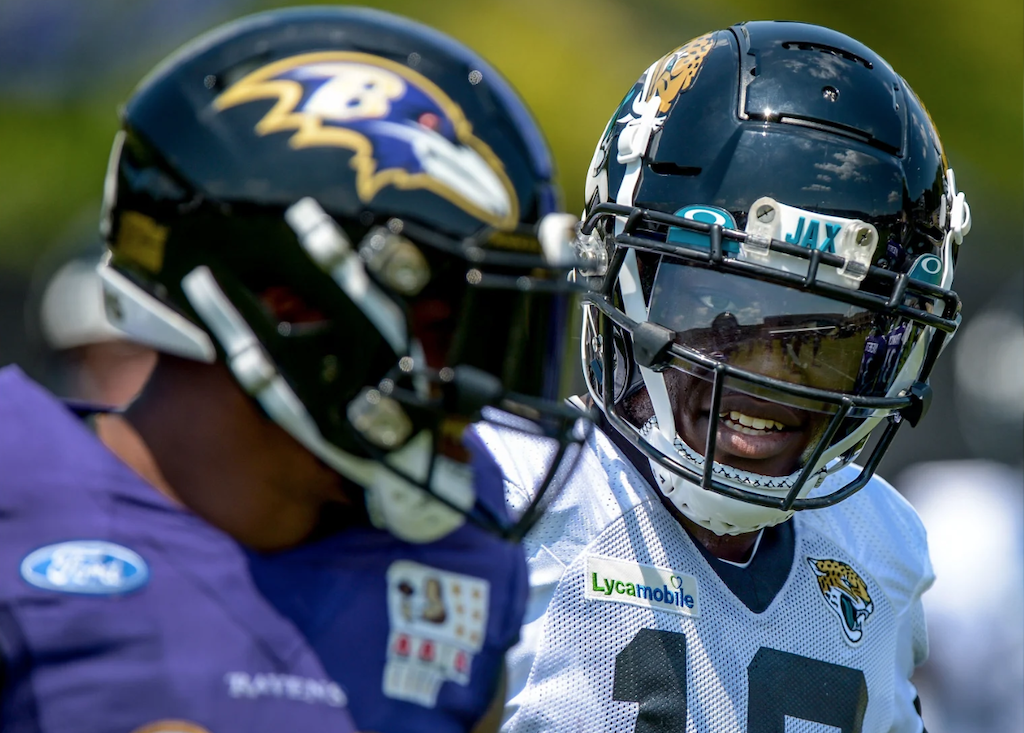 Offense: False starts were a problem again. I counted two false starts but there was likely more than that. The practice sessions are divided between two fields so it’s a challenge to take it all in. This has been a problem for the last week or so for Greg Roman’s unit…The first team offensive front from left to right consisted of Stanley-Eluemunor-Skura-Yanda-Brown. At times Hurst would spell Yanda and when he did, pass pro was a bit shaky. Eluemunor continues to run with the 1’s and that’s a scary thought if camp thus far is any indication…Trace McSorley delivered a heater to Jaleel Scott running a skinny post in traffic for a 15-yard pickup. Scott has been surprisingly consistent throughout camp…During red zone 11-on-11 drills, facing a third-and-5 from the Jaguars 15, Lamar hit Mark Andrews with a beautifully placed ball 7 yards deep in the end zone and high above the shorter defenders. It was reminiscent of the Joe Flacco–Anquan Boldin connection during the Super Bowl 47 run…Boykin beat Jalen Ramsay badly on a 9-route down the right sideline. Lamar overshot his target by a couple yards, otherwise it would have been a 55-yard trip to paydirt…

Defense: On the flipside, Nick Foles hit WR Chris Conley in stride down the left sideline for a 65-yard score. Conley had two steps on Jimmy Smith. Smith has struggled recently during camp…Smith’s bookend, Marlon Humphrey, had trouble staying with shifty Jags WR Dede Westbrook who beat Marlon twice during 11-on-11 scrimmaging, both for intermediate gains…Humphrey wasn’t helped much by a pass rush that couldn’t get home. Foles and backup Gardner Minshew had plenty of time to set and throw. The Ravens struggled to get an interior push…Matt Judon, Tim Williams and Tyus Bowser rotated with the ones on the edge. None stood out. Ditto for Shane Ray.

Overall, I’d give the win to the Jaguars, primarily because they did a better job on both sides of the ball controlling the LOS during 11-on-11.

We’re on to Thursday and the start of the 2019 preseason.