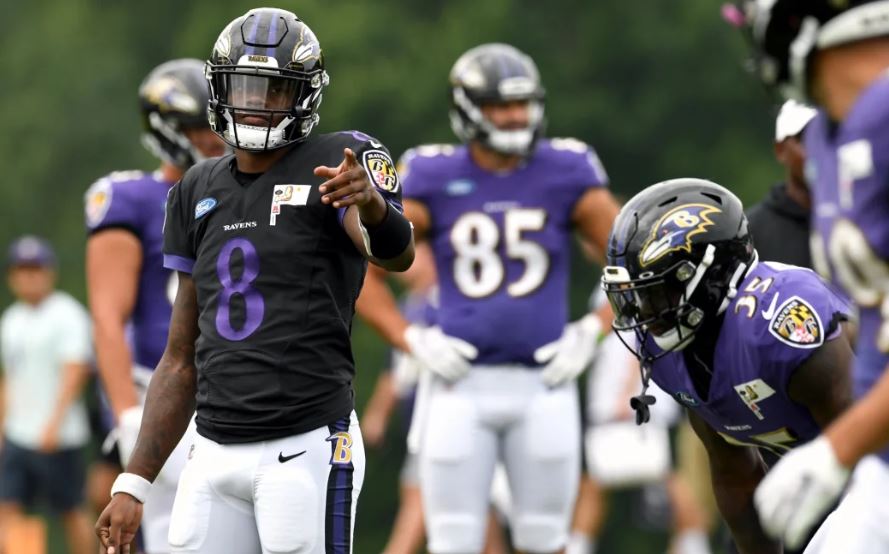 Monday marked the first joint practice between the Ravens and Jaguars, and while one may have been hoping for skirmishes and splashy plays? This wasn’t that. Instead, it was mostly an even-keeled affair.

I was fortunate enough to be joined by resident RSR guru-of-all-things-football, Michael Crawford, whose thoughts can be found here.

The offensive line units remained largely intact as expected, and I’m thinking this is exactly what we’ll see come Thursday night. LG Jermaine Eluemenor rebounded from a shaky practice at my last camp visit (Friday), and by all appearances, I’m not sure Ben Powers will be pushing him for the top LG spot, nor will James Hurst, who took second unit RT snaps today. As for Hurst, he struggled at times with speed on the edge, and drew a holding penalty along the way. Let’s be honest: Hurst is safe, but today didn’t help his cause to work back into the starting five.. Back to the starting unit: Orlando Brown Jr did in fact struggle with Calais Campbell, but kept rookie first-round phenom Josh Allen in check time after time.

Under center, Lamar Jackson started his day in a seven-onseven drill versus the Jags’ first defensive unit (well… sans the rush) going eight for 10, and spraying the ball all over the field. Those two misses came off the fingertips of Chris Moore and Willie Snead (neither drops per se, but proximity was surely there). Lamar did drop into a bit of a four-pass funk later on in 11-on-11 drills, missing a few receivers by a step and drilling one through Hayden Hurst‘s hands, but quickly found his stride and rebounded. Trace McSorely dropped some great passes in on Chris Moore, Malcolm Floyd, Antoine Wesley and Jaleel Scott, while Joe Callahan found Jaylen Smith streaking down the left sideline and hit him in stride for a 50-yard score.

Overall it was a solid showing for all of the Ravens quarterbacks.

At the skill positions, a few players stood out on solid showings, with a few big plays to go with it. WR Seth Roberts pulled down a few passes in the face of star CB Jalen Ramsey, while Moore continued to quietly stack great practices with another five-catch day. Miles Boykin gave the fans a scare after leaving with the trainer midway through practice, only to return to a sigh of relief from everyone in attendance. Mark Andrews may have gotten flagged for an offensive pass interference, but overall had another solid showing with four catches from Lamar, while Hurst continued to find himself more involved with the first-team offense in term of snaps and targets. I’m not saying Hurst is surpassing Nick Boyle on the depth chart, but I’m starting to think Boyle is the TE/FB of the unit that won’t be seeing nearly as many targets as I once thought, largely due to Hurst’s ability to bounce back into the fray.

The running backs were finding holes on occasion, but the bigger focus for me was the pass pro drill versus the Jags linebackers. After watching Justice Hill get buried in the same drill last week, I was hoping to see him bounce back – and that’s exactly what he did, maintaining block after block versus Jags defenders, and keeping his “QB” (random dude in shorts) clean. The best performance of this group to me was by far Gus Edwards, who absolutely manhandled his rusher in every rep. Surprisingly, the biggest struggle here came from Kenneth Dixon, who steadily found himself flat-footed and being driven into the QB, something I’d hope he can clean up.

Defensively, the day was a mixed bag.

Jimmy Smith getting toasted by WR Chris Conley in one-on-one drills wasn’t ideal, nor was Earl Thomas getting spun around on a few occasions, but the other starting defensive backs in Marlon Humphrey, Tony Jefferson, Tavon Young and Brandon Carr fared much better.

The pass rush was largely ineffective as a whole, barring a few pressures from Pernell McPhee, Matt Judon, Tim Williams and Tyus Bowser.

Bowser actually had a pair of great pressures forcing incompletions, and took a Gardner Minshew tipped pass the other way for a 50-yard pick-6. LB Chris Board also contributed to the pick game late in practice, picking off a Nick Foles goal line pass.

As for the interior pass rush… it just didn’t exist. They got zero push on the day in any unit, which is slightly concerning and hopefully not an issue again on Wednesday.

Play of the Day: Joe Callahan deep right to a streaking Jaylen Smith for a 50-yard touchdown. The entire WR corps came running down the sideline to celebrate with him in the end zone.