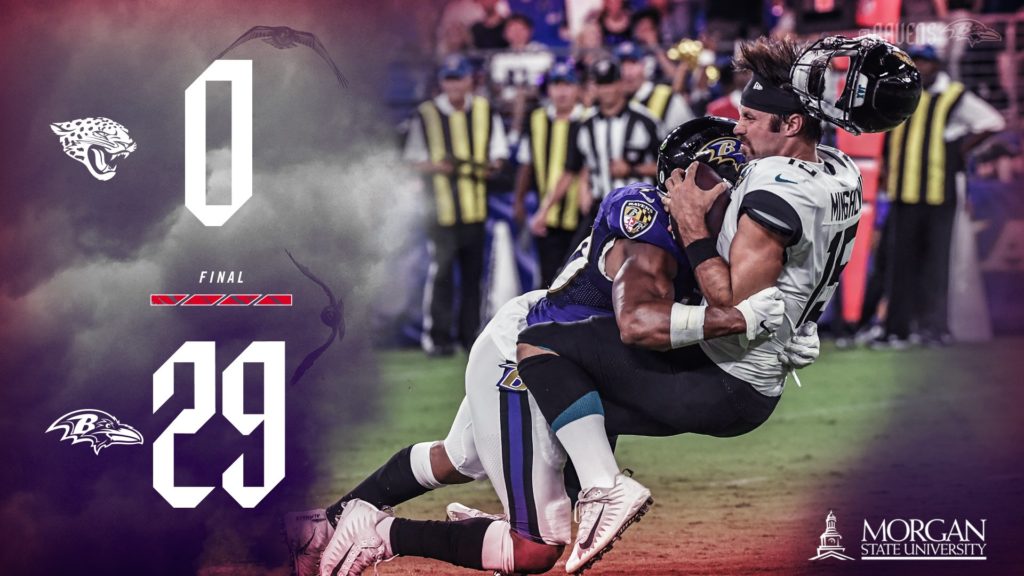 The Ravens dominate the Jacksonville Jaguars in a lopsided preseason game 29-0. It’s the club’s 14th straight preseason win, which according to the Elias Sports Bureau, is the longest preseason winning streak in the last 25 years.

At the end of the day, the game really represents nothing more than a building block, particularly for players looking to scratch and claw their way on to the team’s final 53-man roster. Here are a few of the takeaways from staff members at RSR.

The Ravens dominate on both sides of the ball but dominant performance aside, the tape of the lopsided contest is what the coaches can’t wait to dial into. The Jaguars opted to sit most of their starters and the outcome for them was rather nauseating. The Jags QBs combined for a passer rating of just 14.6 and the offense on whole only mustered up 112 yards of offense on 53 plays. They never crossed the 50-yard line.

The three big questions for the Ravens entering the game were:

* How will Lamar Jackson perform?
* Can Wink Martindale’s unit generate a pass rush?
* Will the Ravens offense line perform well?

Jackson picked up where he left off in practice (138.2 passer rating) although it was very obvious he wasn’t going to put his body at risk and run. That allowed the Jags to tighten up a bit on defense and choke down on the run, making things difficult for offensive line coach Joe D’Alessandris’ unit, as running back Gus Edwards was held to just 12 yards on six carries.

As for the pass rush, Tim Williams and Tyus Bowser brought heat while Jaylon Ferguson showed why you can’t get an accurate read in practice for his style of play. He’s a bull-rusher and that does not play out well in a shorts and shells practice. What he’s capable of presents better in live contact.

Plenty of solid performances to stack upon such as those from Miles Boykin, Justice Hill, Chris Moore, Kenny Young and the deep secondary.

On to Green Bay…

Let’s hit the checklist to see how the Ravens did tonight in a 29-0 meaningless win over the Jags:

That’s it. That’s all that matters. Seeing the rookies like Miles Boykin and Justice Hill show some offensive prowess, while Jaylon Ferguson played the run D and pass rush like a boss, is an added bonus. Also, gotta love that warm and fuzzy feeling knowing that this defensive backfield is incredibly deep with talent. But otherwise we saw a glorified scrimmage with a few splashy plays, a few bad flags, and a few boneheaded plays.

The real takeaways will come on Saturday when we see if there are any notable moves up and down the 1st and 2nd unit on O and D, as an indication of what the coaching staff saw on the field tonight.

Bowser and Tim Williams were urgent.

How close are the Ravens to go for it mode?

Boykin’s early ascension changes the ceiling of this offense in 2019.

Ricard has dominated 2nd and 3rd unit OL’s for the past couple years now.

Chris Wormley looks ready to be the Ravens next really good starting 5 technique.

I’ve been leaning towards the Ravens keeping 5 WR’s but Scott is pushing to make that 6.

Boykin is going to be a star down the road. He got off to an inconsistent start but then got into a groove. Kaare Vedvik will end up getting traded for a sixth round pick. I think a fifth round pick is even more likely than a seventh round pick. I’ll side with Ray Lewis that the Lamar pass was meant for the tight end but all that matters is it was completed. Lamar has made some strides and will continue to make more.

It was a good start for the Ravens albeit against an undermanned Jacksonville team that rested most of its starters. Most importantly, both teams avoided major injuries, which is the underlying success of any preseason game.

Quarterback Lamar Jackson showed command of the offense and led the Ravens to scoring drives in two of his three series. Jackson was 4 for 6 for 59 yards with a 10-yard touchdown pass to Willie Snead (138.2 passer rating). There is room for improvement but this performance was a good sign.

Rookie Miles Boykin made up for a pair of drops (nerves?) with a strong second half. He led all receivers with four receptions for 49 yards and had a touchdown called back because of a holding penalty.

Linebackers Tyus Bowser and Tim Williams might be fighting for one roster spot and both players competed hard throughout the game. Williams appears to be playing with more of an edge this year.

The battle for a potential fourth running between Kenneth Dixon and DeLance Turner could be an interesting battle throughout camp.

Probably most importantly, it looks like we came out of this game clean. Now to the highlights.

Miles Boykin dropped a would-be first down early, but rebounded extremely well thereafter and looks like the real deal if he gets the jitters out.

Anthony Averett was tested a bunch throughout the game and looked really strong, not allowing many completions and wrapping up well when he did. In my mind, he’d be a great #3 option on most teams and is a great example of the depth the Ravens have in their secondary.

Ferguson looks raw but had a terrific series against the scrubs late in the third quarter.

While nobody really jumped out in the 6th receiver race, I think Jaleel Scott is in the lead. He had a really nice catch using his body along the sideline and was laying strong blocks throughout his snaps.

Kaare Vedvik to the Bears. Book it.