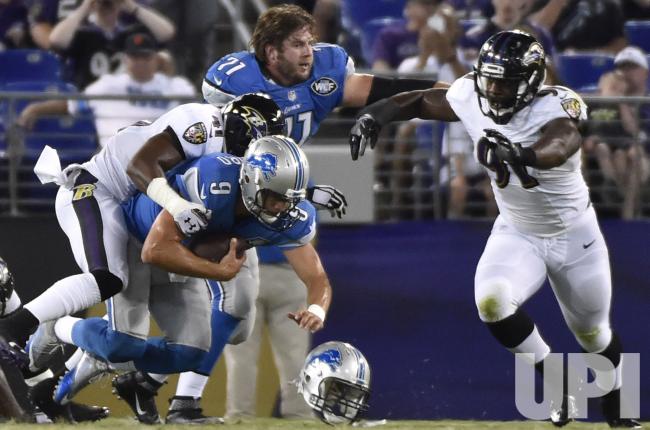 I would consider the NFC to be the more “interesting” of the two NFL conferences over the last five years because the field always seems to be very competitive and the wild card race is always fun to see unfold as the weeks go on. However, just like in the AFC (you guys should check out part 1 of this series) there are a few teams that definitely won’t win their division this season

Ah Detroit, a place where giving a QB who’s never won a playoff game a record contract seems like a good idea.

I must admit, this is going to be the pick I am the least confident in. The NFC North is going to be an absolute blood bath, and I think the Lions are the most ill equipped to handle this season against their division counterparts.

The Bears defense is the best in the league, Aaron Rodgers finally has a head coach that will allow modern play calling and the Vikings have a top ten defense with talent on offense to make a run.

I question an offense led by a QB that has as poor of a record against above .500 teams as Stafford does, but even if you ignore that, there’s just nothing going on with the Detroit offense. Detroit is expected to lean heavily on their running game this season, and it’s going to be an effort led by C.J. Anderson and second-year player Kerryon Johnson. I don’t expect C.J. to enjoy the same success he did in LA and Johnson is coming off a knee injury.

The O-line is middle of the pack status and might falter when going up against stout defensive fronts. It should be better than last year though as Frank Ragnow has been moved back to his natural position at center. T.J. Lang’s retirement does leave a question mark at guard.

The Defense should be “low-key good” according to Adam Rank, but when you’re in the same division as Chicago and Minnesota, low-key good won’t cut it.

The Lions defense is young. The secondary is a big question mark, and when you have to play Aaron Rodgers twice, that’s a problem. This defense seems like the Dallas Cowboys defense from two years ago. What I mean by that is, it seems like they’re still building it back up.

Having said all this about the Lions, the Packers have a quite a bit in common as they also have an up and coming defense and the running game is also unproven. So why am I taking Detroit as the division loser? Rodgers. He’s finally healthy again and finally has a new head coach.

In a world where Eli Manning is somehow still a starting QB in the NFL, Dave Gettleman thought it was a good idea to take Daniel Jones with the sixth pick in the draft. Oh wait.

Odell Beckham is gone. Landon Collins is gone. Eli Manning is still here. The bottom 10 defense will be even worse without Collins in the secondary. Saquon Barkley is going to be up against teams stacking the box so don’t expect a repeat of his 2000-yard rookie season.

This season is expected to finally give the NFL world a true full size helping of Dak Prescott vs. Carson Wentz, and with Philly and Dallas having two of the best rosters in the NFL, the division will go to one of those squads. The Redskins have just enough talent to stay in the hunt this season and assuming they stay healthy, they might do just that.

Manning was sacked 47 times last season, so I’m not sure how PFF has the Giants O-Line ranked at 18. This is a division with Fletcher Cox and Demarcus Lawrence so having a 38-year-old pocket passer like Eli with a below average O-Line is asking for trouble.

There’s just too much talent in this division for a team with seemingly no plan on offense to go anywhere. If Eli gets hurt and Daniel Jones has to start, the Giants will be in trouble. Expect a 6-10 record and a 1-5 divisional record for the New York Football Giants.

Allow me to list the QBs in this division:

Let me ask you a question: Was drafting Winston worth it?

The guy is a turnover machine. He had more interceptions than starts last season and when your QB1 is having to beat out Ryan Fitzpatrick for the starting job there is a serious problem in your QB room. Yes, Fitzmagic happened originally because of Jameis getting suspended, but how that’s still on Winston. If Cam is healthy Winston is easily the worst QB in the NFC South.

The Bucs lack a sturdy Offensive line with Ryan Jensen underperforming at center and Donovan Smith consistently allowing pressure to Winston’s blind side. The unit is ranked 24th by Pro Football Focus.

I do expect the offense to improve under the newly un-retired Bruce Arians, but they will have a lot of work to do against a brutal Divisional schedule.

The forever underrated Mike Evans headlines the receiver corps, but Desean Jackson’s departure in free agency could be painful.

The hiring of Todd Bowles as defensive coordinator and signing Ndamakong Suh should help the 27th ranked defense of 2018, but barring dramatic improvement, it will not be enough if Jameis turns the ball over as much as he has in the past.

This could very well be Winston’s last season in Tampa, and should they finish last in their division this season, Jameis could be in trouble come free agency.

It hurts me to do this to the Cards. While I do believe Kyler Murray is going to do great things in the NFL I still don’t condone drafting a QB, giving him a rookie head coach and horrendous O-Line, and then drafting another QB.

Said QB is the shortest in the NFL and one of if not the smallest. Drafting a small QB and then putting him behind a line that was one of the worst in football is asking for trouble. If Murray wasn’t a dual-threat, he would be completely screwed.

David Johnson won’t fare any better than he did last season since the Cardinals did nothing to address their o-line woes.

The Cards brought in Hakeem Butler to aid Larry Fitzgerald in the WR room and with a better QB the unit that ranked dead last in receiving yards should improve, despite a terrible offensive line.

The defense will struggle to defend the pass with Patrick Peterson suspended. Chandler Jones is a nice piece to have, but the Cardinals had the worst rush defense in the league last year, and they spent most of the offseason trying to improve their offense, typically on wide receivers.

The divisional opponents are tough with Seattle, LA, and San Francisco. All three of these teams have finished the rebuilding phase and all could potentially get into the playoffs this year. The Rams are still stacked offensively and have the best defensive player in football. The Seahawks have Russell Wilson, and this year will finally give the football world a full season of Jimmy Garoppolo. The Niners were victims to the injury last season so expect improvement for them.

As the only team in the NFC West in a rebuilding phase, the Cardinals will finish at the bottom of their division once again.

So those are my losers picks. Agree?