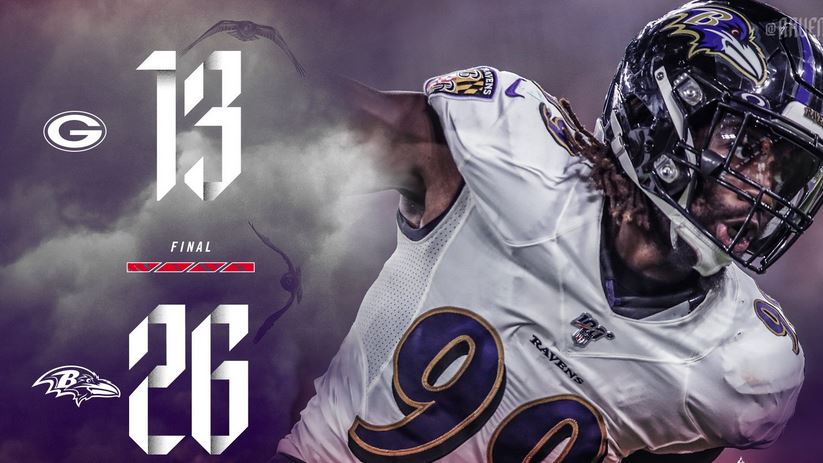 — Lamar Jackson looked solid guiding the offense for a second straight week. He was 6 of 10 for 58 yards (76.3 rating). Jackson ran for 14 yards on two carries and led the Ravens to field goals in each of his two series. He also had an apparent 18-yard touchdown run nullified by a blocking penalty on Willie Snead. Still, the Ravens have to be encouraged by his progress.

— CB/R Cyrus Jones looked sharp for a second straight week with a couple of solid tackles, He also was flawless handling the ball on special teams.

— Hayden Hurst has shown much improvement as a blocker, helping Patrick Ricard pick up a key first down in the red zone. Ricard also recovered a fumble early in the third quarter that set up a TD by Justice Hill. He is a legitimate two-way threat.

— On the other hand, Justice Hill is showing explosiveness and could be a pivotal weapon this season.

— It was a shame Packers QB Aaron Rodgers didn’t play to test the Ravens’ secondary, which was solid against the backups. Carson Wentz will provide that challenge next week in Philadelphia.

Mark Ingram looks like a Raven, picking up an easy 11 yards on his first two carries and finishing with 18 on four. Gus Edwards showed some burst as well (two carries, 13 yards), and Kenneth Dixon surprised us all by returning after being hobbled by a low hit (though 14 yards on six carries isn’t very inspiring). To round out the strong RB room performance, Justice Hill showed his speed and a willingness to use power when necessary (10 carries 49 yards). Lamar Jackson made some nice throws (and missed a couple), while also showing why he’s the most electrifying man in the sport with his TD run (that was called back on a silly penalty).

Thanks to Aaron Rodgers begging out a few minutes before game time, it’s hard to judge much about the defense, but Matt Judon was all over the field, Jaylon Ferguson again flashed, and Earl Thomas got his first snaps in purple and black.

Just after the game, Harbaugh said Tavon Young has a disc issue and could miss the entire season. Quite a bummer after the team just made him the game’s highest paid nickel corner. Next man up…

Side note: The NFL has had some very stupid ideas over the years, but making pass interference a reviewable/challengable play may top the list. What a disaster this is going to be. Hopefully it’s like other bad ideas from the past (last year’s “every hit is a hit-to-the-helmet” rule comes to mind) that seem worse in preseason than they end up actually being…

— A position where an immediate impact as a rookie is more likely is running back. Justice Hill showed flashes tonight that he could be one of those rookies. His speed has been well documented but tonight he showed he is also very elusive and has some power for a speedy back.

— Patrick Ricard has been a bull in a china shop in preseason. I’d like to see him get more time on the D-line this year.

— Jaleel Scott & Antoine Wesley: Both have been pleasant surprises as big physical and speedy receivers, in camp and the preseason games they are making downfield plays.

— Trace McSorley seems to be making the most of his additional reps with RG3 sidelined. A beautiful touchdown pass was shortly followed by a poorly thrown interception. Two more weeks to show what he can do as a pure quarterback. Unlikely that’s what his role will be if he makes the 53 man roster.

— Other than the Snead-slowed series the Jackson-led offense was impressive. Lamar’s touchdown run shouldn’t be happening in the preseason but shows how electric he’s going to be and what he can add to the offense. WOW.

— We keep saying it… but could Chris Moore take the next step?

— Once again, I thought Trace McSorley looked good enough to find a spot on the roster. In a few years, he’ll be a solid backup and therefore will be snatched up from the practice squad if he doesn’t make the 53.

— Justice hill looks shifty and FAST. Can’t wait to see him next to Jackson in an RPO.

— The Jaleel Scott v. Antoine Wesley battle for a possible 6th receiver is heating up. Both made a few nice snags and flashed decent potential. I still think it’s worth keeping one of them.

— Even beyond his fumble recovery, Pat Ricard was a disruptive force in his time. He absolutely has earned a spot and deserves more snaps on defense.

— I simply don’t see Kenneth Dixon making the team. He can’t stay healthy and he doesn’t provide anything the Ravens don’t already have.