The Ravens play their third preseason game against another team with playoff aspirations, the Philadelphia Eagles. The teams had a pair of dual practices leading up to the matchup so neither coach will be hard-pressed to play the starters for long.

Jacksonville and Green Bay decided to sit their starting quarterbacks rather than take any chances with the Ravens defense. There is a solid chance the Eagles will do the same with Carson Wentz.

Here’s what to watch

1. Lamar Jackson and the air attack

After a frustrating first day of practice in Philadelphia, Jackson bounced back by the following session, going 5 of 7 with four touchdowns inside the red zone. Traditionally, the starting quarterback plays an entire half or more in the third preseason game. However, the Ravens want to spread out Jackson’s reps through the four games so he’ll play about 20 snaps. Still, that’s plenty of time for him to make some plays downfield and show he has a firm grasp of running the offense.

2. Edge rushers need to step up

One of the biggest question marks facing the Ravens this offseason is the pass rush. The team needs to fill the void of the loss of Terrell Suggs and Za’Darius Smith, who combined for 15.5 sacks last season. After a quiet start to camp, rookie Jaylon Ferguson has played aggressively in the opening two preseason games. The Ravens would love to see him take the next step with his development. Tyus Bowser and Tim Williams are playing better, but they must keep up the momentum to ensure a roster spot. Shane Ray earned a half-sack and quarterback hit in the previous game against Jacksonville, but he will need to flash against the Eagles because his future with the team is precarious.

3. Ramping up the running attack

Mark Ingram, Justice Hill and Gus Edwards are showing they can be a formidable trio in the backfield. Ingram has been limited by the coaches in preseason, but each time he touched the ball against the Packers, he showed tremendous burst, finishing with 18 yards on four carries. “We didn’t give him much, but it was good watching him do it,” offensive coordinator Greg Roman said. Hill has shown the same type of burst and he could bring a new dimension to the offense. Kenneth Dixon is fighting for a roster and he will get more opportunities to make his case against the Eagles if he plays. De’Lance Turner also is pushing for a spot and is an effective special teams player. Turner had 29 yards on five carries in the second preseason game against the Packers. 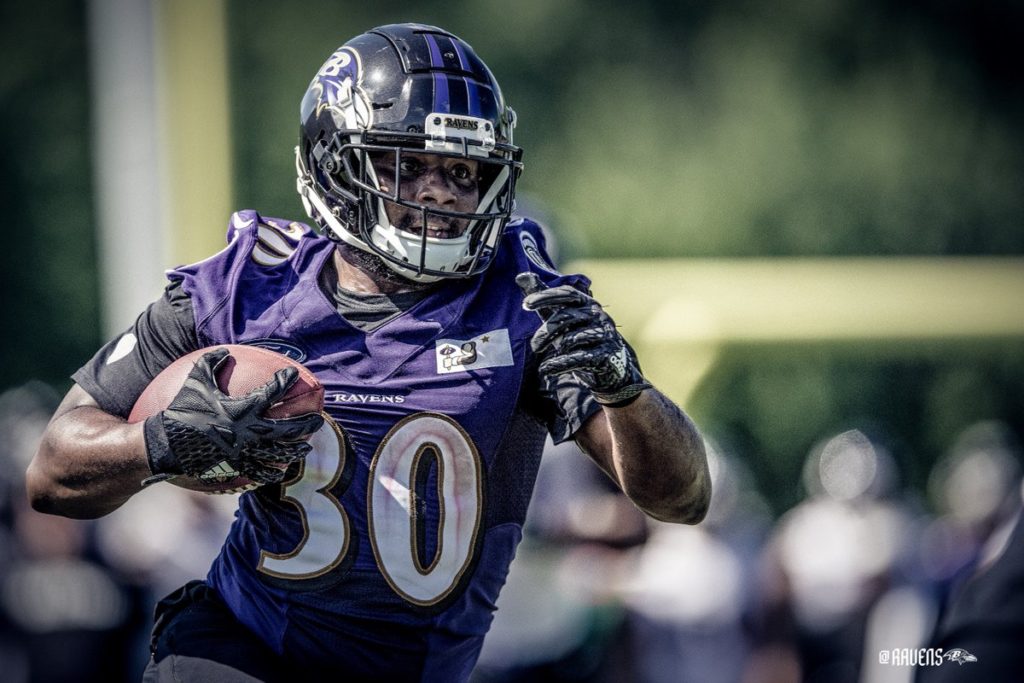 4. Another look at the inside linebackers

Kenny Young moves into the starting spot with Chris Board out with a concussion. Young is having a solid preseason, but Board had the edge over him because he has been even more outstanding. Board’s absence will also open the door for one of the younger players to shine, most notably Otaro Alaka, who has been one of the surprises of camp. The undrafted rookie from Texas A&M had a game-high six tackles, including two for a loss, against Green Bay.

5. Shuffling on the offensive line

Left guard Jermaine Eluemunor and Ronnie Stanley suffered injuries this week in Philadelphia and neither will play in the game. Right guard Marshal Yanda is being held out by coach John Harbaugh. As a result, Bradley Bozeman will get a chance to flash his versatility at left guard and rookie Ben Powers steps into the starting role at right guard. James Hurst will fill Stanley’s role at left tackle. This will be a good test for these players and show the Ravens how much depth they actually have on the o-line.