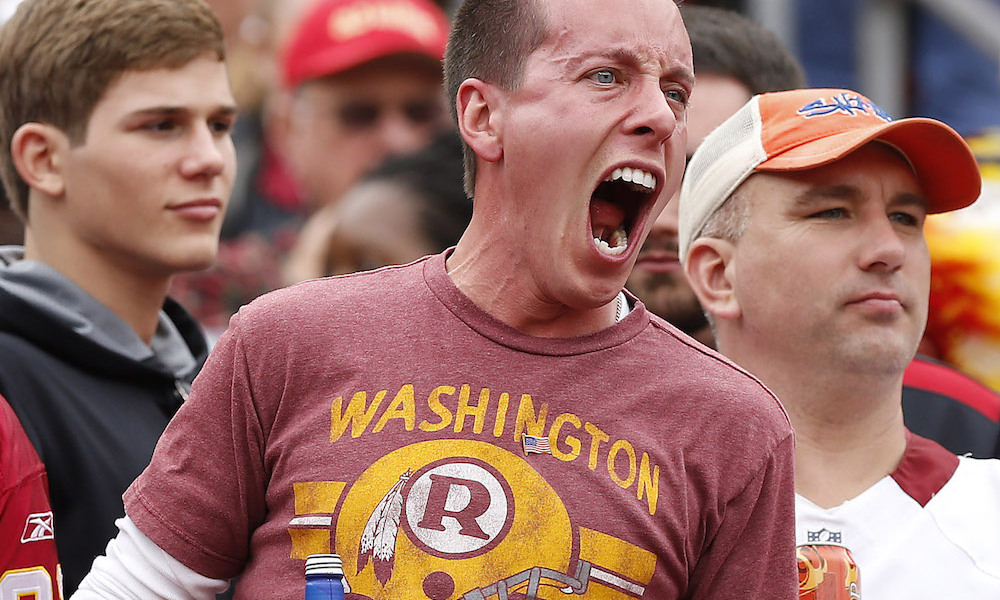 The era of Fantasy Football, EA Sports and football analytics has ushered in a new breed of NFL fans. This new breed is less sensitive. Their compassion towards players is anesthetized by their own fulfillment. What’s in it for me? What can these players do for me? Did my fantasy team win?

They are all-in on results and their patience for substandard performance is thin. And as quickly as they’d bench, trade or cut an underperforming player in the fantasy world, they seek the same knee-jerk treatment for the players in the real world.

And then there are those old school fans. Those who remember the days when John Unitas and Raymond Berry could be seen perfecting their timing in a neighborhood park or Artie Donovan knocking back a case of Schlitz in a local watering hole. They’ll tell you stories about how tough those players were. How they weren’t coddled like today’s athletes and how they had to work in the offseason to make ends meet because Friday paychecks in football weren’t all that much better than the Bethlehem Steel plant worker’s take home pay.

“Those were the days”, they’ll tell you and to hell with these modern day pansies who make millions just to show up on Sunday to play a kid’s game. Can’t they play for less and for the love of God they must be outside of their minds if they think I’m paying for a PSL. Whose idea was that?

These are a few of the criticisms NFL fans hurl towards today’s athletes. Along with the handsome W-2, it comes with the territory for modern day players. Some accept it but don’t understand it. They play alongside men who spend hours upon hours in the gym, compete against behemoth athletes with uncommon physicality who combine speed, power and mass in such large quantities that create a form of violence that is foreign to the man on the street.

Pain management is a way of life for these athletes. Excruciating cold tubs are like a daily vitamin. Some feel it more than others. And if they have a bad day at work, it is out there for all to see. It’s examined and re-examined. Criticized by those who have never played the game at their level. Imagine a doctor or car mechanic having his or her work so closely scrutinized. Again, it comes with the territory. It’s the opportunity cost for being an NFL player. 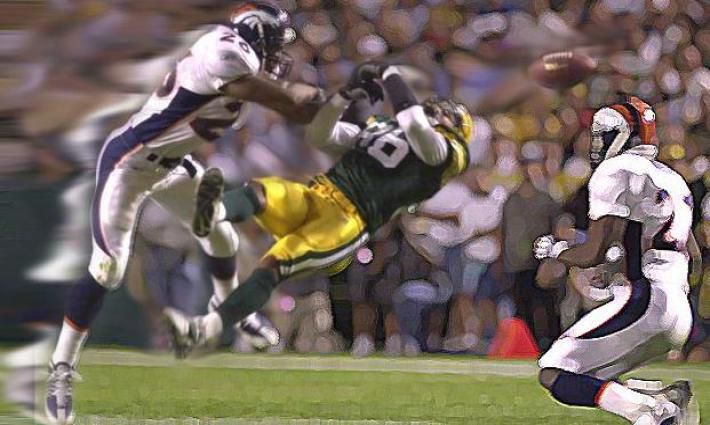 Back in 2005, I remember kneeling about 10 feet from the field on the sidelines during training camp at McDaniel College. The Ravens were running through some special teams drills and Roderick Green assumed the role of gunner.

I had a small, spiraled notebook on my knee, cell phone in my pocket and a pen in my hand. It was a still day, with no breeze and oppressively hot. Sweat ran down my back. I could only imagine how lathered up a 6’2”, 265 pound linebacker who ran a 4.5-40 must have been.

Special Teams Coordinator Gary Zauner put things in motion with his whistle and Green came flying down the sideline where I knelt. As he went by the centrifugal force was so strong that pages from my notebook turned from left to right, the same direction as the speeding Green. It was right there and then that the violence of the NFL became more noticeable to me than ever before. There were no collisions. But I imagined one. How would it feel if that man, with that raw power and equipment ran into me? I equated it to just running full speed into a parked car.

And this wasn’t even game speed.

I can’t even begin to understand how these players feel by mid-season – how broken their bodies must be.

Several years ago, I had an opportunity to interview ESPN’s Sage Steele. During the interview, Sage shared a few things, and those that have resonated the most centered upon a sense of entitlement that some athletes possess, and how so many are really good men – men of faith.

The entitled have been coddled since they were toddlers, the kids that youth sports coaches wanted on their teams. These kids went on to be the best high school athletes who earned college scholarships and were shuffled through college on the gravy train because of their athletic prowess. They then became professionals.

Always catered to, regularly enabled – another modern day narcissist was born, who could do no wrong. And the enablers made sure of it. How else do you explain the way the league hypocritically gives more chances to players like Tyreek Hill, Kareem Hunt, Brandon Marshall, the late Chris Henry and Greg Hardy? Unfortunately, as a society, we focus our attention on these dramatic cases. But they really aren’t the norm that NFL fans think they are.

For that we can thank an opportunistic media. 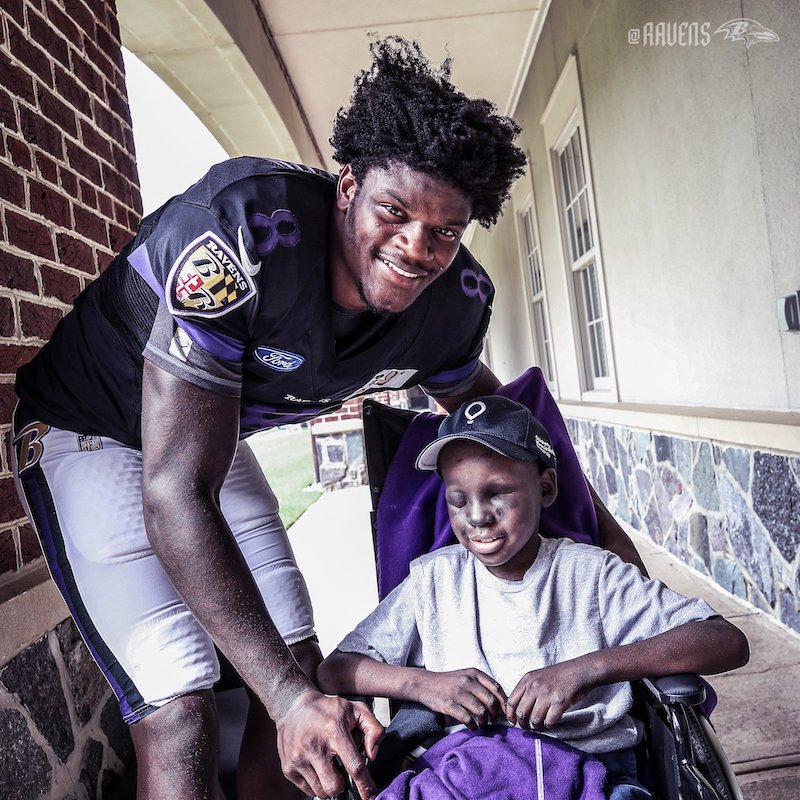 In that same interview with Sage, she talked about how many good, God-fearing guys reside in NFL locker rooms. How their stories of faith, love and family are largely ignored because such things aren’t attention getters. They don’t generate click-bait headlines. Many of these men have fought through adversity foreign to most of us. They’ve weathered extreme poverty, life without a parent or two or worse, parents mired in addiction. And somehow, through sports and proper mentoring, all the while guided by faith, players landed in the NFL where they discovered a new lifestyle and an opportunity to support their families in an uncommon way.

But they don’t stop there. They give back to the community, set up foundations and try to touch the lives of other kids who they detect might be struggling with the same adverse conditions that were once theirs.

In 2014-2016, we had a feature on RSR called “Player Positives”. The intent was to shed a spotlight on the wonderful things the Ravens were doing in the community. We got away from that because there was little interest in it. And it makes me wonder why. It makes me wonder why we shouldn’t try it again. The world and clearly Baltimore, could use a little more good news. And NFL fans should be made aware of it.

As previously mentioned, pain management is a huge part of being an NFL player. Some deal with it in a natural way. Others lean on prescribed pharmaceuticals to help them cope. And then there are those who opt for marijuana, seeing it as a less harmful, a less invasive way of managing the aches that are part of the job. It’s all part of life in the National Football League.

Andrew Luck couldn’t manage the pain anymore. It altered his life, derailed his pursuit of happiness, and so he retired. Other retired players are now dealing with the collateral damage of their time spent on an NFL football field. One such player is former Ravens fullback Le’Ron McClain.

Before you continue on, I want to be clear that the language and content in McClain’s Tweets could be disturbing. I also think it’s important that you know the Ravens have been in touch with McClain and they are doing what they can to help. And as you can imagine after reading these Tweets from McClain, the situation is complicated.

We wish Le’Ron all the best and hope that he finds peace of mind in the very near future. And to both the new school and old school fans, have compassion for these men like Le’Ron. It wasn’t all that long ago when the talented fullback did his part to help the Ravens save the 2008 season.

Need to tell my story of how my head is crazy and how football did it…. Please someone help me get this out the @NFL puts paperwork in out faces and thats it. Yes its programs fuck all that I need help now I need a plan….. Fuck Man. They dont fucking get it man

Watch how fast they come to aid if I was som3 QB or anything but no I was fucking fullback that did it all. @NFL I need help and i need the process to speed the fuck up Im about to crash out and its paperwork I dont wanna hear it. Fuck man im done…. Im out

Nights like this are the worst….. I cannot sleep… My anxiety is up… real talk im a fucking mess. Like whats wrong with me man. Come on bro!!!! Smh…… Please just Pray for me! GodWinz GodWinz!!!!!!!

Great career Luck I pray you don’t have to go thru shyt on your mental like me now. I swear if you called and I answered cool but if I aint answered stop fucking calling me please. Yall dont care!!!!!! Leave me alone got damn it. Imma handle this the best way I can….

Swear God got me!
Doing all I can to make it today. #AlphaMental #MambaMentality

Another Day Another Opportunity
All positive King All Positive

Long Nights….. about to go for a walk. Like this feeling like im drifting.
Pray for me. All Love #Alpha

Another sleepless night.
Another day Another Opportunity tho.
Staying positive Kings and Queens. Its hard no lie and im scared. Look at me talked all that on the field. I was A BEAST and now im a mess man in tears now but swear imma fight this peeps. Keeping this #AlphaMental

Getting my story out peeps just in case something happens to me I want everyone to know whats going on a daily for 24 hours. The darkest shyt ever. Its no joke peeps. My life is no joke man be in my shoes for a few hours smh some people are sad smh. Im not looking for sympathy