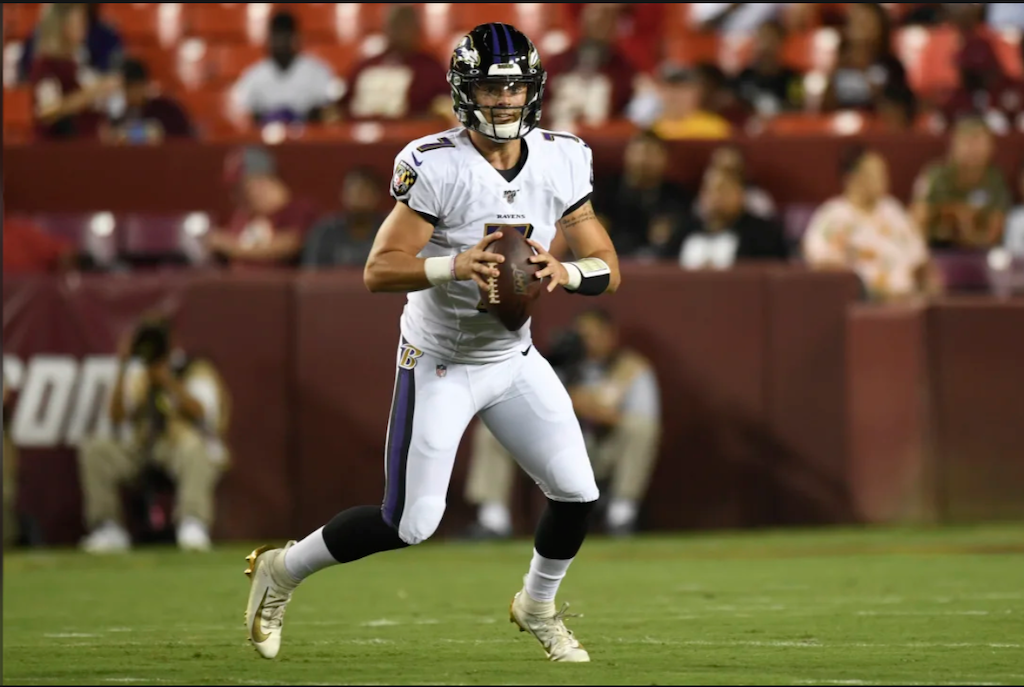 The RSR Staff chips in with their individual thoughts on the 2019 preseason finale in Landover, MD, as the Ravens beat Redskins 20-7, stretching their preseason win streak to 17 games.

This has been the most excruciating slate of preseason games since the Ravens were founded in 1996. The value of these games is shifting with seemingly a greater emphasis on the results of practice and joint scrimmages with participating teams. More and more key players are relegated to sideline observers. And the WBAL broadcast is really pretty bad.

That said, with a heavy reliance upon reserves, coaches have been given more of an opportunity to build rosters from the bottom up – evaluate the lower rungs of the roster and seek to build quality depth. But from a fan perspective, it makes for less compelling games because the quality of play declines as the number of penalties soar. During the four fake games the Ravens competed in, the total number of penalties were 14, 13, 24 and 21, respectively.

Tonight, the focus was upon the players who we all thought to be on the bubble. Some performed well, yet they could still be looking for new employment. Others probably deserve their place on the wrong side of the bubble. These are my takeaways in no particular order.

• Kenneth Dixon (13 carries, 66 yards) and De’Lance Turner (18 carries, 62 yards) combined for 128 yards on 31 carries. But neither will make the team. Dixon is likely to get a look from another team while Turner will land on the practice squad again, unless of course he opts for another team’s practice squad where he sees more opportunity. Do you really think Eric DeCosta can still get something for Dixon? Houston, do you still have a RB problem?

• Marquise Brown fielded punts like he was trying to catch and eel with a spoon. That boosts the value of Cyrus Jones who comfortably lands on the 53. Like the interception that slipped through his hands, so to, has Maurice Canady’s days with the Ravens. Justin Bethel hasn’t done enough to justify foregoing a potential 5th round comp pick.

• I had hoped that we’d get a chance to see Seth Roberts and Michael Floyd battle it out. Maybe they already have in practice. Roberts gets the nod.

• I wondered if either Zach Sieler or Gerald Willis makes the 53. I don’t see either of them making it but one will end up on the practice squad.

• Trace McSorley has forced the Ravens’ hands. They drafted him for a reason and he hasn’t done anything during the last 2 weeks, when the pressure has been on to perform, to sway the staff in the other direction. He stays. Gerry Sandusky’s man-crush is validated.

• Shane Ray has been a disappointment all summer. Tonight, was no different. His resume will attract another suitor.

– With a true breakout game, there’s no way the Ravens can leave Jaleel Scott off the roster.

– Similarly, Trace McSorley showed out, and those two seem to have a nice connection. The game simply isn’t too big for Trace.

– Patrick Mekari was all over the O-Line, so I’d have to think his flexibility is intriguing enough for him to warrant a spot.

– Kenneth Dixon was pretty impressive. It’ll be curious to see if the Ravens choose to keep him or can swing a trade.

– Tyus Bowser and Tim Williams looked pretty good yet again. We really need one of these guys to step it up this year. My money’s on Bowser in a platoon with McPhee.

– Greg Senat had a couple more critical penalties, and that will probably mean his spot on the roster. Maybe we can keep him on the Practice Squad.

Everyone can use a little help with their sideline style… even John Harbaugh. Lamar with some fashion ideas for his coach. Willie Snead approves. @Lj_era8 @Willie_Snead4G #Ravens @WMAR2News pic.twitter.com/cBAFMVca7u

— Jaleel Scott staked his claim as the sixth receiver with five receptions for 78 yards, including an athletic 24-yard touchdown over a defender. Scott has also played well on special teams.

— Running backs Kenneth Dixon (13 carries for 66 yards) and De’Lance Turner (18 carries for 62 yards) made a strong case for the final 53 but the numbers work against them. Dixon will have little trouble finding another team and the Ravens would love to stash Turner on the practice squad as insurance.

— OT Greg Senat did not help his cause with a pair of penalties. Patrick Mekari played much better and he is versatile with the ability to take reps at center, guard and tackle. He might have leap-frogged Senat on the depth chart.

— QB Trace McSorley is a playmaker, throwing for 171 yards with a touchdown. John Harbaugh said this week the team will find a place for McSorley and his performance against Washington supported that decision.

— ILB Otaro Alaka also helped his cause and led the team with five tackles. He also showed sideline-to-sideline speed. The Ravens face a tough decision with him because he is ready to make an immediate impact.

you know you’ve made it when @McConaughey asks YOU for a selfie 🤳 @jtuck9 pic.twitter.com/4XmepsPCUl

– Trace McSorley had a little uneven of a performance and while I’d still roll with two quarterbacks, he did enough to give John Harbaugh reason to keep three.

– The depth in the secondary is a huge concern. The notion the Ravens should trade Jimmy Smith and a pick for Clowney has always been silly to me, but last night, if any indication, proves my point.

– Kenneth Dixon should be prime for trade interest. He is very talented but has struggled to stay on the field. We will see what Eric DeCosta can swing here.

– Tyus Bowser and Tim Williams turned in strong performance again, but now we get to see if they can continue this against starters. They certainly made their case for playing time.

– While preseason is meaningless overall, it can be a nice segue into the season. We will see if the Ravens can parlay this into a strong September. Time for meaningful football!

While the 4th Preseason game tends to focus on the depth behind the depth, I think it was a telling game for a few of the bubble guys on this roster.

– Otaro Alaka played with his usual fire, speed, and power. I think he’s the next in a long line of successful UDFA’s’ to make this Ravens squad- BUT. Alaka mentioned a lingering ankle issue over the past few weeks after the game… could this be our phantom IR injury with Alaka designated to return Week 9?

– Hollywood Brown trying his hand in the return game was just flat out wrong. If Harbs & Co wanted to see what he can do, you give him reps in practice where you don’t need to worry about his head getting ripped off, as it almost did.

– Malcolm Floyd not playing was surprising to me… he’s in no way a roster lock (and really shouldn’t make the team) and could’ve used this game to up his potential to land elsewhere come Saturday. Some could put Seth Roberts in this same category, though I believe he’s safe.

– Greg Senat and Patrick Mekari are likely fighting for the final OL spot on the roster. Give Mekari credit for playing all across the line, but is his skill set and positional value redundant given the presence of Bradley Bozeman? As for Senat, he did well at LT, barring 2 holding calls (1 was bogus). I personally think Senat would be valued depth at LT that James Hurst cannot provide, and given Ronnie Stanley’s tendency to miss at least 1 game each year, I can see a scenario in which he steals the final OL spot…

– Jaylon Ferguson may not have showed up big on the stat sheet, but he’s getting pressures and more consistent in each passing week. Yesterday’s bull rush leading to a tipped pass is just another example of what he’ll be providing in Baltimore this year.

– I’m so torn on this McSorley lovefest… yesterday he got heaps of praise, and rightfully so for his TD dime to Jaleel Scott (who is safer than safe). On the same note, we’re talking 55% completion yesterday against backups, and had a handful of errant passes. He eeks potential but he’s clearly developmental at this juncture. I think he makes the 53, but I don’t think he’s proven to be more than what Josh Woodrum was for us a few years back (at least in regards to being the signal caller).